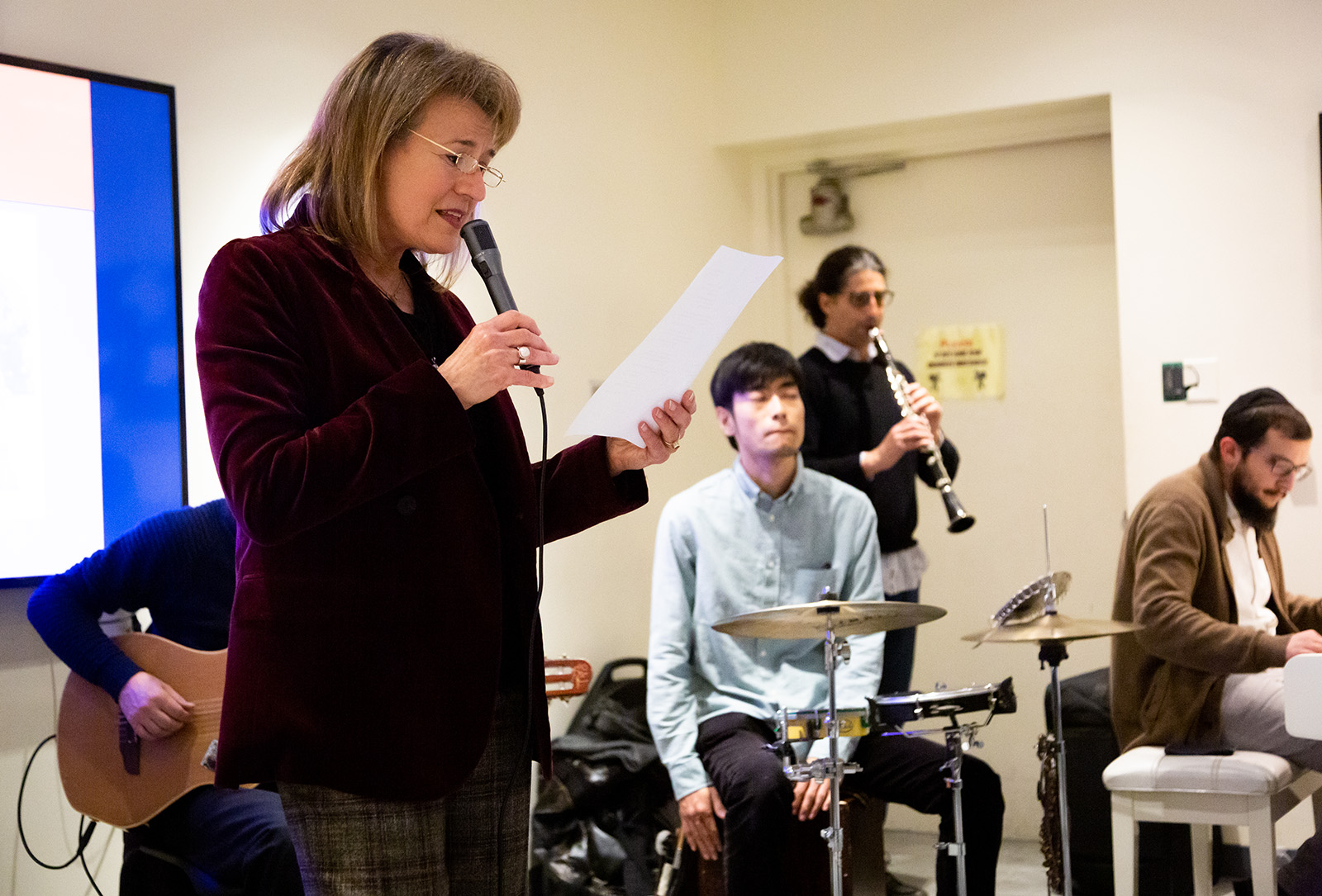 Miri Koral, a professor of Yiddish culture and language at UCLA, read Yiddish poetry during a workshop Sunday while musicians from the band Klezmer Juice played music behind her. (Amy Dixon/Photo editor)

Klezmer originated in Eastern Europe but finds its future in a new generation of American Jewish youth.

UClezLA, which took place Sunday at Schoenberg Hall, is a Yiddish culture festival which included workshops on klezmer, a musical genre containing Jewish influences and a mixture of sounds from Romani music and Polish folk music. When translated from its Hebraic roots, “klezmer” means “instruments of melody,” and the style goes back to 16th century Eastern Europe. Miri Koral, a lecturer of Yiddish language and culture at UCLA, said the festival worked toward a revival of public knowledge of Yiddish language and the art of klezmer.

Teaching students and the public to play klezmer at UClezLA helped to revive the once-fading genre and give the public insight into how this music was used in daily prayers, holidays and other songs in Jewish culture, Koral said.

Hankus Netsky, co-chair of contemporary improvisation at the New England Conservatory in Boston, led one of the workshops on the roots of klezmer at the event. Netsky said teaching music today is usually just done by looking at notes on a paper, but he and the other workshop leaders teach klezmer by starting off with singing and then transferring those same qualities to the instruments. Koral said klezmer instruments – such as the clarinet and the fiddle – are played in ways that resemble the human singing voice by mimicking the ululation in Jewish songs.

Learning about klezmer took a lot of effort in the past because there was no access to it online and in recordings, Netsky said, and he wants to be a resource so younger people can learn about their cultural past. Netsky said he incorporates Jewish cultural background into his teachings of klezmer to aid musicians in connecting with the songs they perform.

“We’re bringing it back, and we’re saying there’s an entire world here that we didn’t learn about when we were really young but that we’re making available for a new generation,” Netsky said. “We want them to take away consciousness about this culture, and how they can have access to it.”

Klezmer offers a connection to a past Yiddish-speaking civilization that survives in part through music, said Peter Rushefsky, executive director of the Center for Traditional Music and Dance in New York City. Rushefsky said by leading a workshop teaching people to play instrumental klezmer at UClezLA, he hoped to show a new generation of people how music can connect them to the rich history of Jewish civilization. As a result of events like the Holocaust and Jewish migration into America, much of the historic relevance of klezmer was lost as Jewish immigrants assimilated into American culture, Netsky said.

“Music is an amazing gateway into any culture,” Koral said. “Learning or being drawn to music is a way of getting a taste of the culture, so that you want to pursue it a little more and learn more because Yiddish culture was murdered in the Holocaust.”

Jewish immigrants to America in the 1880s brought new cultural influences to the traditional music. Klezmer was associated with the daily lives of the Ashkenazi Jewish people in Eastern Europe, but it became more Americanized through a jazz influence that developed with the introduction of music recording, Rushefsky said. Although the genre lost popularity in the 1960s and 1970s, passing on the knowledge of it to younger people allows for a revitalization and evolution of the culture’s music, he said. Showing students how to play klezmer gives them exposure to the style in hopes that they will carry on its history but continue to transform klezmer so it does not fade away, Rushefsky said.

“You can breathe life into (the songs), you could reinterpret them, you can really get into them in a way that really gives a lot of meaning in our contemporary lives,” Rushefsky said. “It really enriched my life, and I think it has enriched a lot of the lives of people that have been part of the klezmer and the Yiddish music scene for decades now.”

The instructors at UClezLA planned to teach attendees how klezmer evolved to fit into the world that surrounded it. Rushefsky said klezmer is not simply the music of the past, but one that people can continue to learn, evolve and pass on for the future to come.

“I don’t see this as a one-day workshop where we all forget about it and go on with our lives,” Rushefsky said. “I see (the workshop) as opening people’s eyes and ears to klezmer and Yiddish culture, and how it can be a part of their contemporary lives and open the door to deeper exploration of it.”