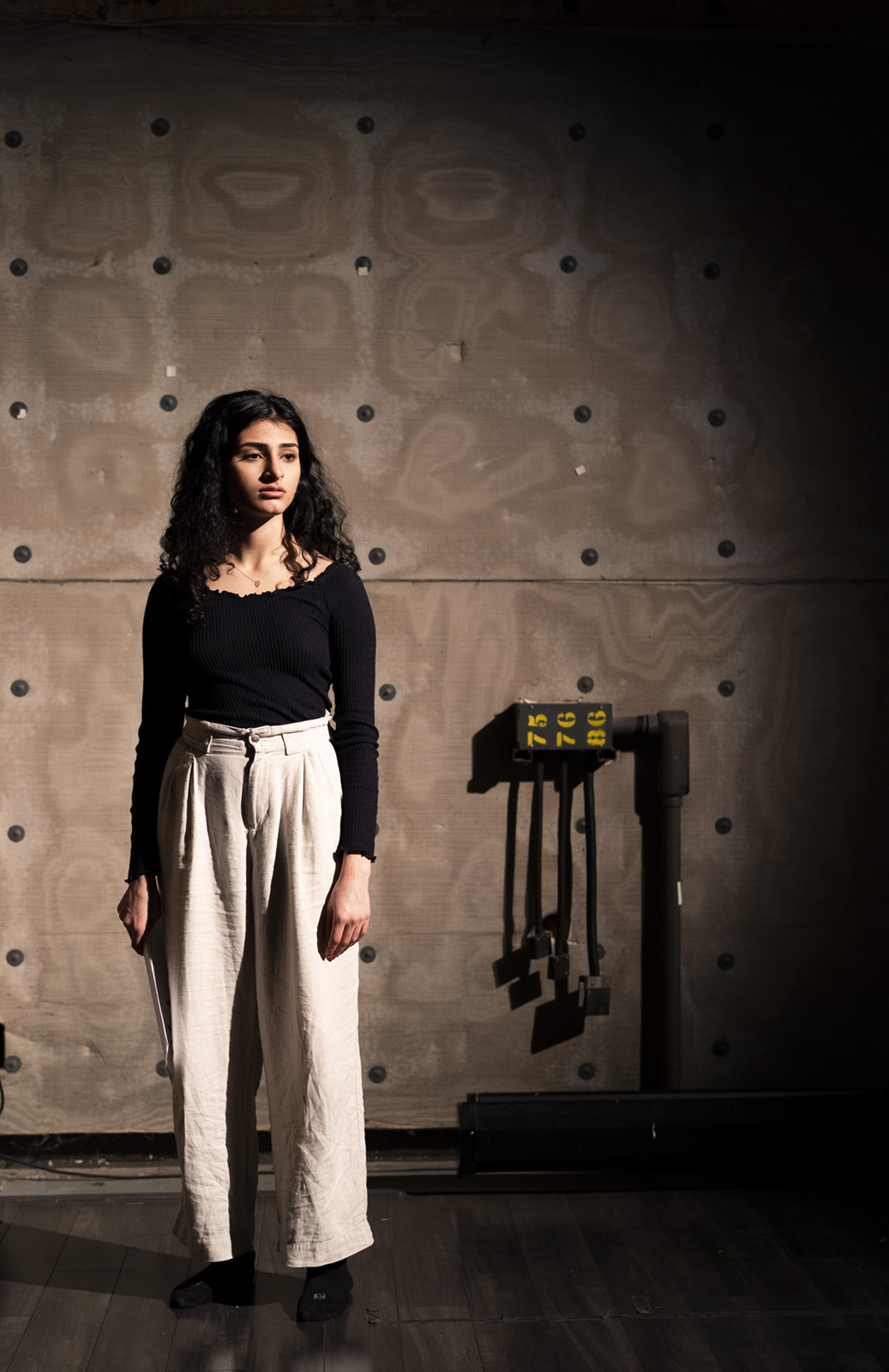 Ava Lalezarzadeh, a third-year theater student, will participate in a spoken-word segment during the showing of “The Sun Ladies VR Project.” The virtual reality and performance piece, which will be featured Friday and Saturday at UCLA, aims to discourage violence against women. (Xuxin Zhang/Daily Bruin)

A pair of goggles allows audience members to join the Yazidi warriors as they load guns and march through the Iraqi desert in uniform.

On Friday and Saturday, UCLA’s School of Theater, Film and Television will feature creator Maria Bello’s virtual reality and performance piece “The Sun Ladies VR Project.” The show begins with Yazidi women training and sharing their stories of genocide and slavery in a virtual reality documentary, and is followed by UCLA students performing a spoken-word piece on violence against women in the U.S. The documentary and the live-action performance highlight how violence against women is a worldwide epidemic and the ways in which people can and do fight back, Bello said.

The virtual reality film, directed by Christian Stephens and Celine Tricart, follows Xate Singali and the Sun Ladies, a group of women who organized a regiment through the Kurdistan military to combat the enslavement of thousands of Iraqi women by the Islamic State group in 2014. The Sun Ladies fought IS with swords and guns to free their sisters, singing on the front lines to let IS know they were there, Bello said. After being inspired by the story of women fighting against extreme violence, Bello organized a team to travel to Iraq in March 2017 and film the women to share their stories.

The virtual reality documentary features shots of the women training alongside news footage from the 2014 invasion by IS, Bello said. Since Bello’s team could not capture footage of the fighting themselves, the documentary includes an animation based on archived news footage of the women fighting from the frontlines with scenery and fighters crafted through brushstroke-like splotches of colors. Bello pieced together the translated interviews to create a storyline between the different women’s stories, providing the voiceover herself alongside the virtual reality experience.

“What I wanted was a group experience for everyone to be in the moment at the same time, to actually be there with these women in the desert and that’s what happens,” Bello said.

After watching the short film “Welcome to Aleppo,” the first virtual reality footage of a war zone, Bello wanted the same full, immersive experience for telling this story. Though other people discussed creating a film on the Sun Ladies, Bello wanted a documentary since it could be produced quickly and be seen by the public shortly after the time of the filming.

When the virtual reality documentary finishes, the audience members will be instructed to take off their goggles so they can see three female actresses sharing stories of violence, which signifies asking the audience to not be blind to today’s violence, Bello said. Director Aya Saleh, a graduate directing student at UCLA, said the live performance acts as a bridge between the Middle Eastern conflicts and violence in the United States. Since the women speaking of violence are now in the same space as the audience, it forces audience members not to disconnect from what they hear on the news of other parts of the world due to spatial separation.

“Where the live performance comes in, … now you have these women facing you and you have to look at them and have to listen to them and kind of puts it in the now and puts it in the here and you can’t escape from it,” Saleh said.

The live performer Taji Senior, a graduate acting student, said the spoken-word piece written by Bello is the story of the victimization and brutalization of women throughout the world and how they fight back against that, with her and other two actresses representing the women fighting for their dignity and honor. Through sharing many women’s actions, Senior said the piece creates an understanding that all people deserve honor, dignity and safety.

While both the documentary and performance show how women are fighting violence, Bello said the performers ask the audience members how and if they are going to fight back against violence as well.

“With the performance piece, students will be able to have a real experience of what it is to be in the circumstance of fighting back and what that means and the courage to do that,” Bello said. “There are many different ways to fight back – with our pen, with our words, with our votes, with our art, so how are you going to fight back and show up against sexual violence?”