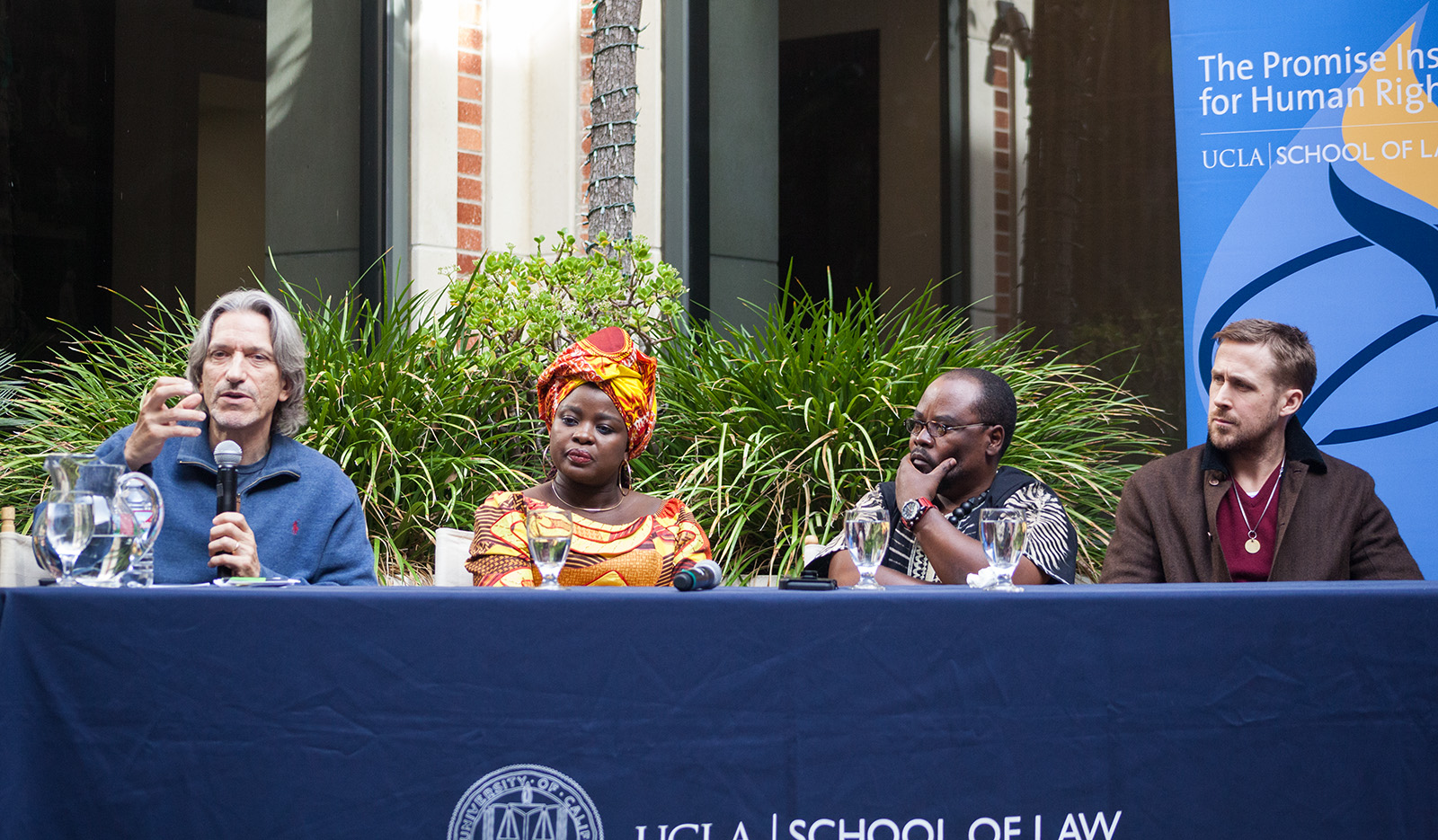 Ryan Gosling stepped behind the camera to contribute toward the nonfiction book “Congo Stories.”

Actor and now photographer Gosling was joined by co-authors John Prendergest and Fidel Bafilemba and afterward author Chouchou Namegabe for a panel discussion hosted Monday afternoon at the Fowler Museum. Their book, central to the discussion, highlights five centuries of exploitation and the Congolese people’s subsequent resistance. Each panelist recounted either their contributions to the book or their personal experiences working in the Democratic Republic of Congo.

Hosted by Kate Mackintosh, executive director of the Promise Institute for Human Rights at UCLA School of Law, the panel discussion covered human rights violations and Western exploitation of Congo’s natural resources to raise awareness of the atrocities occurring.

“Despite reliance on billions of dollars of humanitarian aid, Congo is not as dependent on the United States and Europe as (the U.S.) been on the Congo,” Prendergest said.

Congolese resources, such as tungsten, tin and tantalum, are used in phones and laptops today. Prendergest said the country’s mineral wealth gave rise to a long history of exploitation by the West, beginning with colonization by Portugal in the late 15th century. Though no longer colonized, Congo still falls victim to Europe and America in terms of resource extraction based on cultural demand, and supplies a range of raw materials including ivory and copper. The situation only became worse in the late 19th century, with the creation of the auto industry and manufacture of rubber tires in Ireland. King Leopold II of Belgium then began to send armies into Congo to extract the rubber from its rainforests, exploiting the nation even more.

But the maltreatment of Congo hasn’t been restricted to just national resources. Bafilemba, a Congo native, said some women and children work under deplorable conditions, often forced to do so at gunpoint. Through appeals made to the United States government, former President Barack Obama passed legislation to ensure companies selling their products in the United States source their materials from conflict-free mines. While President Donald Trump attempted to repeal this legislation, bipartisan support of the bill prevented him from following through. Though conditions have improved drastically as a result of this legislation, corruption is still prevalent, Bafilemba said.

Bafilemba’s contributions to the project were often based on his own experiences, but Gosling was inspired to shoot after watching movies like “Hotel Rwanda” and Angelina Jolie’s documentary “First They Killed My Father.” Both films feature other countries dealing with similar issues. Gosling said his photographs, shot before the book’s conception, exhibit a theme of hope, highlighting everyday moments such as a girl preparing for school, a mother bringing home newborn twins and a boy playing in a Spider-Man costume.

“(The pictures show) a refusal to be broken,” Gosling said. “(They’re) a visual window into a sense of hope.”

Namegabe, also optimistic about the nation’s future, spoke about the silent war on women in the form of rape and sexual violence. As a reporter, she collected stories of Congolese women being taken to the jungle and raped repeatedly. In one particularly gruesome instance, the rapists poured gasoline over a woman’s genitalia and lit her on fire; the woman survived and was then forced to eat the flesh of her murdered children, Namegabe said.

Though female audience members visibly teared up at Namegabe’s anecdotes, the panelist said 2018 Nobel Peace Prize Winners Nadia Murad and Denis Mukwege bring hope to the women of the region as civil rights activists advocating for these victims. More recently, some legislation has been passed in Congo to outlaw acts of sexual violence. Furthermore, she finds hope in the presence of the audience members engaging in their discussion. The panelists concluded with a call to action, encouraging audiences to openly support the people of Congo.