Wang’s Word: Honesty, jests and the occasional friction between Chip Kelly and the media 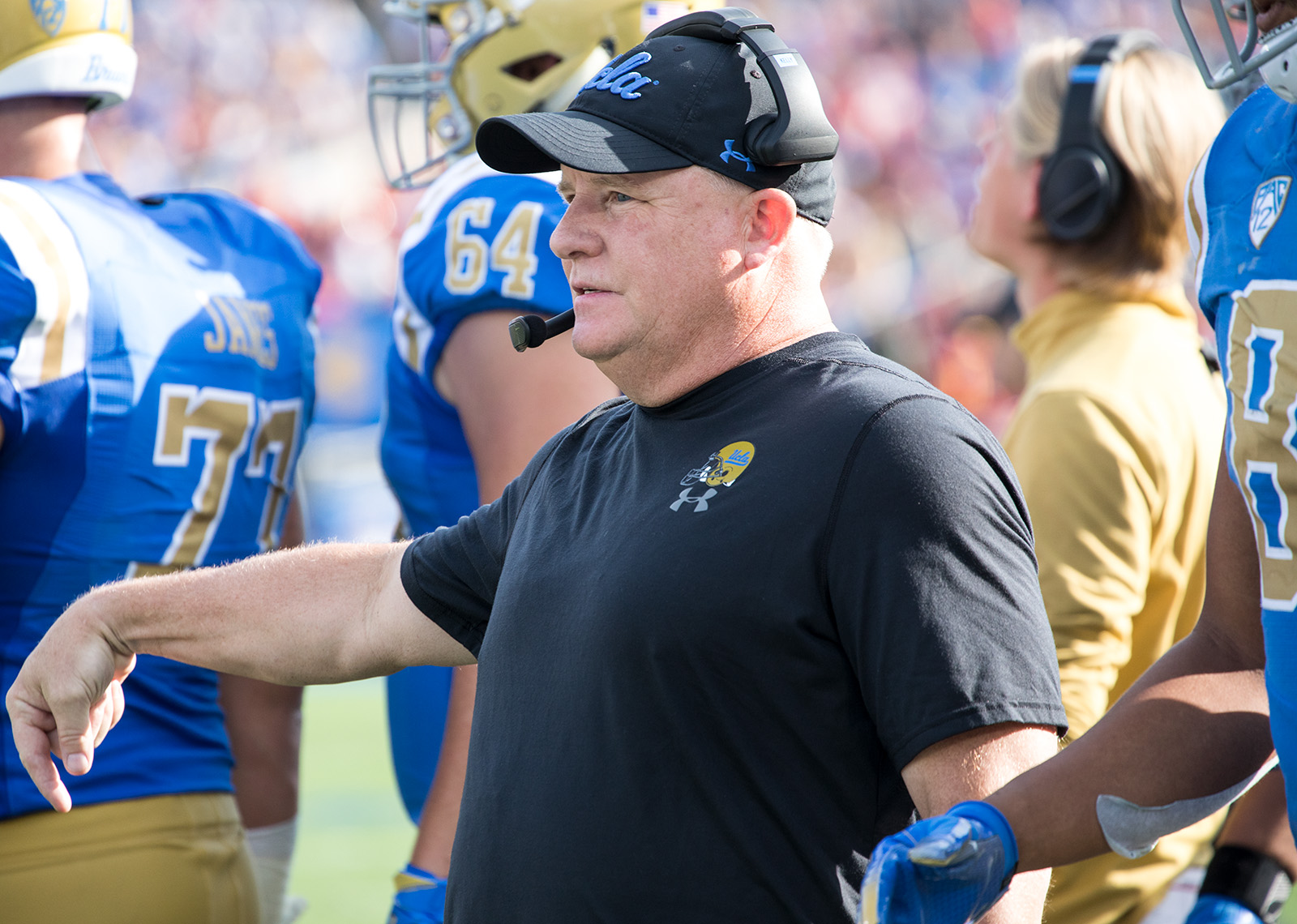 Coach Chip Kelly led UCLA football to a 3-9 record in his first season with the Bruins. Kelly had previously coached at Oregon, the Philadelphia Eagles and the San Francisco 49ers, before taking a year off to be an analyst at ESPN. (Kristie-Valerie Hoang/Daily Bruin senior staff)

The first time I spoke to Chip Kelly was after he raced through the latter part of the recruiting cycle and signed his first freshman class in February 2018.

I wasn’t expecting any answers on the level of Jim Mora’s fervor or Steve Alford’s loquaciousness, but I was curious as to how Kelly would approach the media after a disastrous 2-14 season in San Francisco and a year as an ESPN analyst.

Kelly honestly answered the questions in that press conference and every one afterward. His answers could be quite forthcoming, and they sometimes trended toward being misleading, but he was, for the most part, honest.

But he wasn’t immune to the occasional mishap with the media. One question I asked after Saturday’s game against Stanford seemed to strike a nerve.

Why did he call a timeout with 44 seconds remaining in the first half, facing fourth and goal from the one-yard line, with plenty of time still on the play clock?

“What time did we score with? We ran some plays after that,” Kelly said, after asking me to repeat my question.

Yes, UCLA ran one play after that since it was fourth-and-goal from inside the one-yard line after an offside penalty by Stanford. The Cardinal, one way or another, would get the ball back.

If Kelly had let the clock run down until the play clock nearly expired before calling timeout – and UCLA scored anyways – Stanford would have gotten the ball back with about 20 seconds left on the clock, compared to 40.

To be fair, my original phrasing was vague – I couldn’t quite remember the down and distance at the time of the timeout, but I did recall how I found Kelly’s decision to quickly call timeout odd.

I tried to clarify my question twice and was interrupted both times.

“Your point of your question is that you have it automatically in your head that we were going to score,” Kelly said. “So if we ran out of time and didn’t get an opportunity to score, you would be asking me why didn’t I call a timeout. Anybody can play that side of the fence, … I don’t care how much time is left on the clock. That has nothing to do with it. You got to give yourself ample enough time to score. We scored and we were happy about that. But if we didn’t score, we may have needed more plays.”

That’s sound reasoning, except for the fact that the play was fourth-and-goal from the one-yard line, and the odds of getting a first down by throwing the ball and drawing a penalty are infinitesimal. Oh, and your best offensive player also happens to be your running back.

Kelly isn’t obligated to answer every question he receives. It’s his responsibility to address the media, but he probably has other things on his mind, such as rebuilding a Pac-12 program.

It is well within his rights to set boundaries on what he will and won’t divulge – he’s made it clear that, during games, the only injury updates he hears are whether the player is in or out of the game, so he can’t comment on specifics postgame.

He has also maintained that his focus was on each upcoming opponent and not on any retrospection. To Kelly’s credit, he stuck to that line throughout the season.

So after the season finale against Stanford, could he offer any early reflections on how his first year at UCLA ended?

“From a game that just ended three minutes ago?” Kelly said while checking his wristwatch. “I think I’ll take a little more time before I reflect on that.”

Yes, sometimes he could – intentionally or not – take questions too literally.

But he could also provide some respite from the droning churn of the football season.

On more than one occasion this season, Kelly would lighten the mood by poking fun at Los Angeles Times’ beat reporter Ben Bolch.

Bolch couldn’t pronounce the player’s name – to be fair, none of the reporters could – and Kelly seized the opportunity.

“You have to pronounce his name for me to answer the question,” he replied.

No one did, but Kelly eventually answered the question, nonetheless.

In his first season in Westwood, Kelly was consistent in his relationship with the media. There were some thorny moments, but that’s to be expected when he sees the same faces three or four times a week and has to answer questions from them.

Even with the occasional trolling, – like randomly dropping Milli Vanilli in the middle of an answer about not believing in the idea of carrying momentum into next season – Kelly kept things real. Now he gets a well-deserved break from the media.