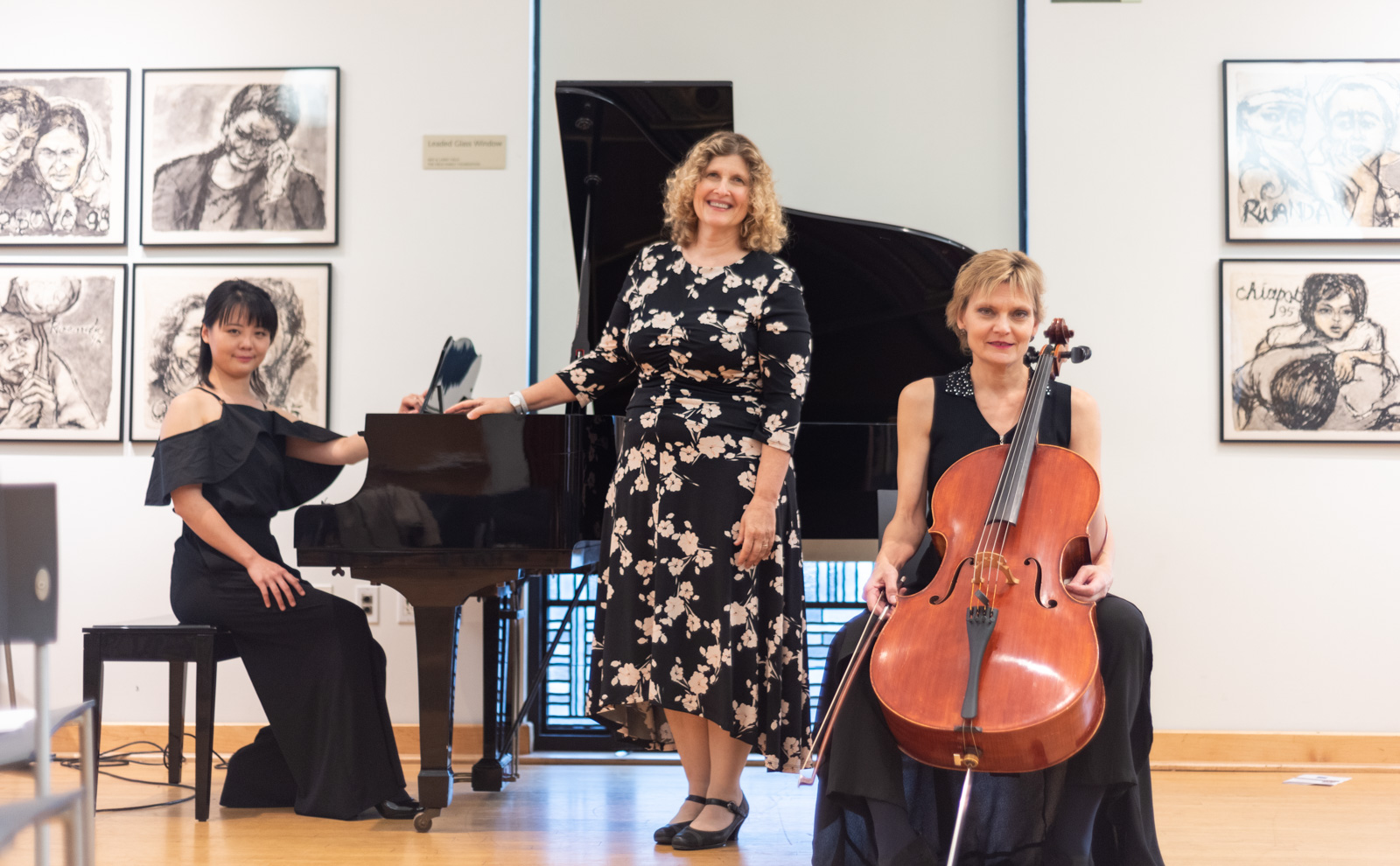 Xin Zhao, Nanette McGuinness, Anne Lerner-Wright (left to right) are members of the Ensemble for These Times, which performed its concert, “Emigres and Exiles in Hollywood,” at UCLA Hillel on Sunday. (Hannah Burnett/Daily Bruin senior staff)

Composers forced into exile during the Holocaust had their voices heard through a performance by the Ensemble for These Times.

Alumna Perla Karney, the artistic director for the Dortort Center for Creativity in the Arts at UCLA Hillel, said she was thrilled to put together a concert on campus when she got a call from Ensemble for These Times. The group travels across the U.S. and performs a set list focused on musical works by composers who were either exiled during the era of Nazi Germany or killed in concentration camps. The ensemble performed its concert titled “Emigres and Exiles in Hollywood” on Sunday at Hillel. Karney said such events help provide a stage for the music of Holocaust-period composers. By showcasing the pieces, the performance shows the influence that Jewish immigrants had on the music of Hollywood film scores by becoming heavily involved in the industries.

“It’s the musicians who had to leave Germany and were exiled … and lost their belongings, their families, their culture … because they couldn’t remain in the country of their birth,” Karney said. “They were displaced and yet they made a life for themselves, and they contributed so much to the music industry, into the film industry.”

Karney said she wanted to host the concert by the Ensemble for These Times because of her own Jewish background and her family’s past connections to the Holocaust. In addition, the event would help Hillel in its mission to educate the public about Jewish culture and Holocaust-related education, Karney said.

Lorry Black, a faculty member at the UCLA Herb Alpert School of Music, said his role as the associate director of the Lowell Milken Fund for American Jewish Music, which was a co-sponsor of “Emigres and Exiles in Hollywood,” allowed him to become more invested in the project. Black said he was able to share access to UCLA’s music archives with the ensemble, bringing awareness to the importance of the composers’ music that they performed.

Black’s knowledge in ethnomusicology and Jewish music helped shed light on the history of the Jewish immigrants’ music that was played at the concert. Black said some of the compositions the ensemble played tend to show a stylistic evolution. Pieces by composers such as Kurt Weill, who the ensemble covers, show the transition from playing cabaret music in Berlin to music that has a more American-style harmony, characterized by jazz elements. By implementing the Americanized features to his European style, Weill’s music demonstrates how the music of Jewish immigrants fits into the Hollywood sound, Black said.

“These Jewish composers who (immigrated) here help establish (what) the Hollywood sound was for a very long time,” Black said. “(It’s a) narrative that has repeated itself to today, and for that reason it’s very relatable.”

Nanette McGuinness, the founder for the Ensemble for These Times, said the group felt it was important to perform works by Jewish composers to demonstrate how influential they were within the world of Hollywood film scores. For example, the ensemble played three songs by Arnold Schoenberg, who immigrated to the U.S. in 1933 and eventually moved to Los Angeles. He introduced his 12-tone technique to the Hollywood scene. The method ensures that all of the 12 notes of the chromatic scale are used in equal amount, without emphasis on any one note in particular.

Because of UCLA’s close proximity to Hollywood, McGuinness said it was the perfect place to hold a concert with the theme of the industry’s sound. McGuinness said the Ensemble for These Times hoped to bring awareness to the prominence of the works of Jewish immigrants within the world of Hollywood film scores and classical music. The ensemble brings awareness to them by ensuring their works have a stage to be showcased on in concerts like the one they performed at UCLA, she added.

“We’re trying to make sure that this music doesn’t get lost from the larger classical music narrative, whether it’s because the composers perished, or because they aren’t as well-known because they went and worked on movies music as opposed to the concert hall,” McGuinness said.

In showcasing the works of past Jewish composers, Ensemble for These Times showcases what immigrants can bring to the U.S, McGuinness said. She said when Jewish composers came to Hollywood, many of them channeled their love for music into their work in the film score industry. And, with their concert, The Ensemble for These Times hopes to send the message that the musical contributions of Jewish immigrants helped the Hollywood sound gain more fame.