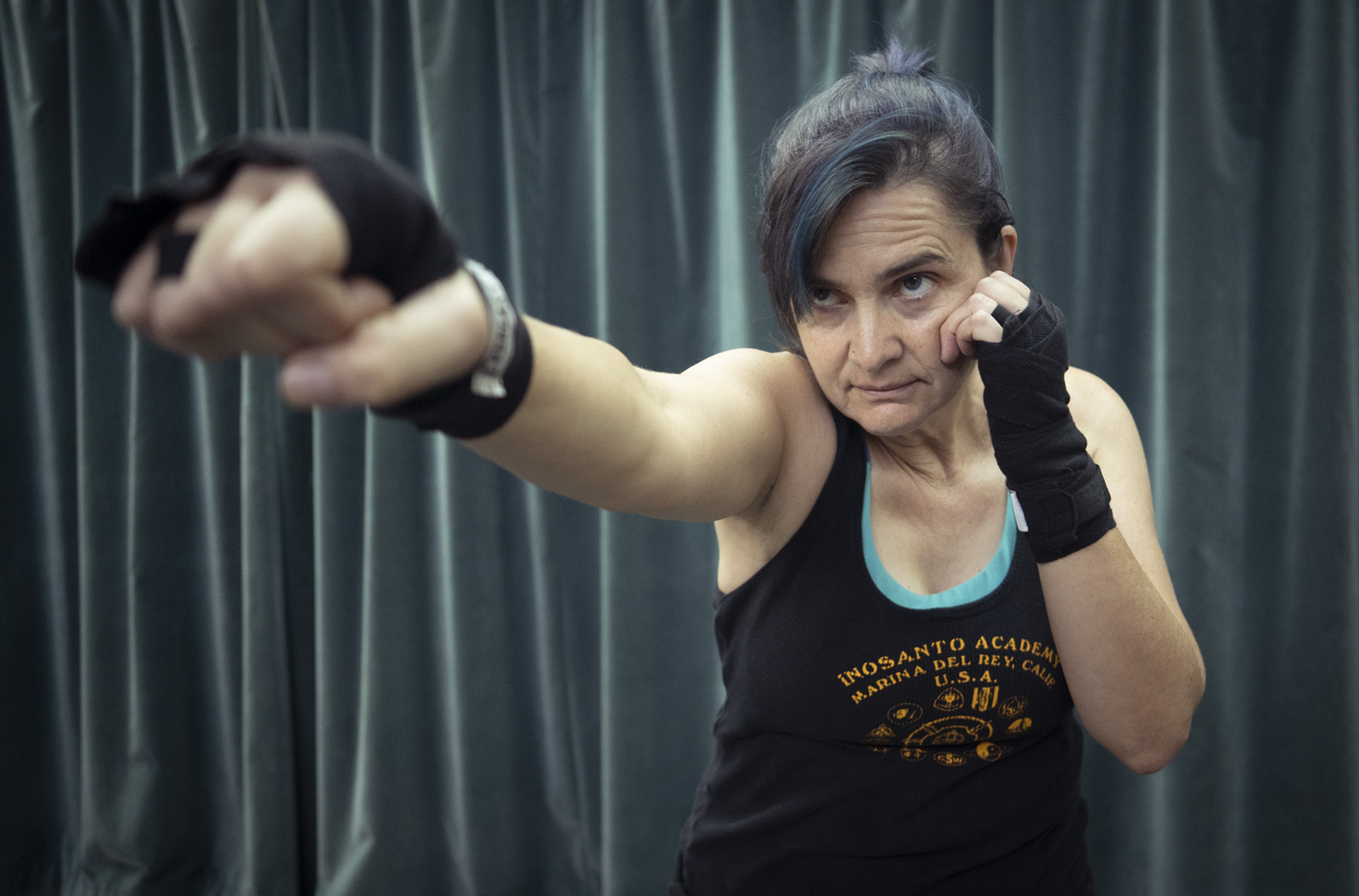 UCLA professor of dance Janet O’Shea began to train in jeet kune do a few years after arriving at UCLA in 2008. Originally trained as a dancer, O’Shea began experimenting with various forms of martial arts. (Niveda Tennety/Daily Bruin)

Janet O’Shea said she finds philosophy in her fists when practicing jeet kune do.

While training in various martial arts forms, the UCLA professor of dance found deeper meaning and applied concepts of play and risk that she learned to other spheres of her life.

O’Shea began to train in jeet kune do a few years after arriving at UCLA in 2008. She had already experimented with other martial art forms such as wing chun kung fu – after years of dancing, she wanted to share her experiences with martial arts in her upcoming book. Titled “Risk, Failure, Play: What Dance Reveals about Martial Arts Training,” the book examines a variety of martial arts including jeet kune do and delves into the nuances of boxing, kickboxing and grappling. Published Thursday, O’Shea’s book explores how play provides tools for approaching real-life situations.

“I’m an ordinary person, not a champion fighter, nor did I go through any significant transformation because of martial arts, like the classic transition from timid student to fighter,” O’Shea said. “I started doing it because martial arts was fun, and I realized this book is about understanding why fun matters.”

Invented by Bruce Lee in 1967, jeet kune do translates literally as “the way of the intercepting fist.” Lee referred to it as “scientific street fighting,” intending it to have applicability to self-defense and the learning process. O’Shea said she included jeet kune do in the mix of more well-known martial arts discussed in her book because it is regarded more as a philosophical way to approach training, drawing heavily from other fighting systems.

“I began to realize there are many ways in which martial arts differ from violence,” O’Shea said. “I started looking at why the same actions in different contexts might mean totally different things, or why a punch on the mat means something totally different than a punch out in the real world.”

On a technical level, jeet kune do consists of footwork from Western fencing, strikes from Western boxing and kicks largely taken from various kung fu systems, said O’Shea’s training partner Wang Zhihao. When at UCLA, O’Shea said she trained in a progressive style of jeet kune do, which asked its participants to study a range of martial arts and consider their commonalities, adapting them to one’s own body and training experience. The style she practiced allowed her to better see the interplay between risk and play in martial arts, O’Shea said.

“Understanding the philosophical aspects, apart from just learning the rote movements, is key to gaining deeper insight and enjoyment in any sport,” Zhihao said. “I think what makes any game come alive is the human aspect of it – how players communicate in any arena is particularly exciting.”

At the beginning of the writing process, O’Shea said she avidly read martial arts memoirs and noticed many of them were based on a classic fight narrative, with the timid neophyte training until they are able to enter the ring and defeat their Goliath opponent. O’Shea said she instead decided to focus on the training aspect because it would better emphasize her point about the benefits of play – building the book around a climactic fight would have undercut her argument about viewing fun as a worthwhile endeavor.

Play involves effort that should not be overlooked, said choreographer and graduate student Arushi Singh.

“Play is not just an unintentional activity. You’re actually really focused in a state of flow while following a bunch of different rules and developing a skill,” Singh said. “It’s a highly disciplined mental activity, so it’s important to explore these ideas of play and effort, which otherwise might be pitted against each other.”

O’Shea’s new book also discusses the real-life applications of play that can be found in martial arts. When beginning to train in boxing, O’Shea relied on attack tactics used in wing chun kung fu, misinterpreting boxing as a style of fighting that required brute force and aggression over thoughtfulness. She said she began to walk into her opponents’ punches less and less as she embraced the softer, more playful aspects of boxing, evading and using footwork to control the situation. By applying this mindset to real-life situations like arguments, O’Shea has learned to de-escalate stressful situations in a constructive way.

“Boxers say things like, ‘If I go in there mad, I’m going to get knocked out,’ and it made me realize that fighting is an apt metaphor for my daily life. If someone’s being argumentative, sometimes it’s not helpful to respond with aggression,” O’Shea said. “You have to bob and weave and slip those punches and wait for that person to tire themselves out.”

Through years of engaging in dance and various forms of martial arts, O’Shea said she hopes her book will encourage readers to take up some means of physical play, and partake in them as long as they provide a source of joy. The lessons beget from play are equally useful whether in the ring or in a real-life situation, she said.

“Martial arts, and really any act of physical play, pushes us to the brink, creating a force that leads to self-reflection and encourages us to think about our own vulnerability,” O’Shea said.