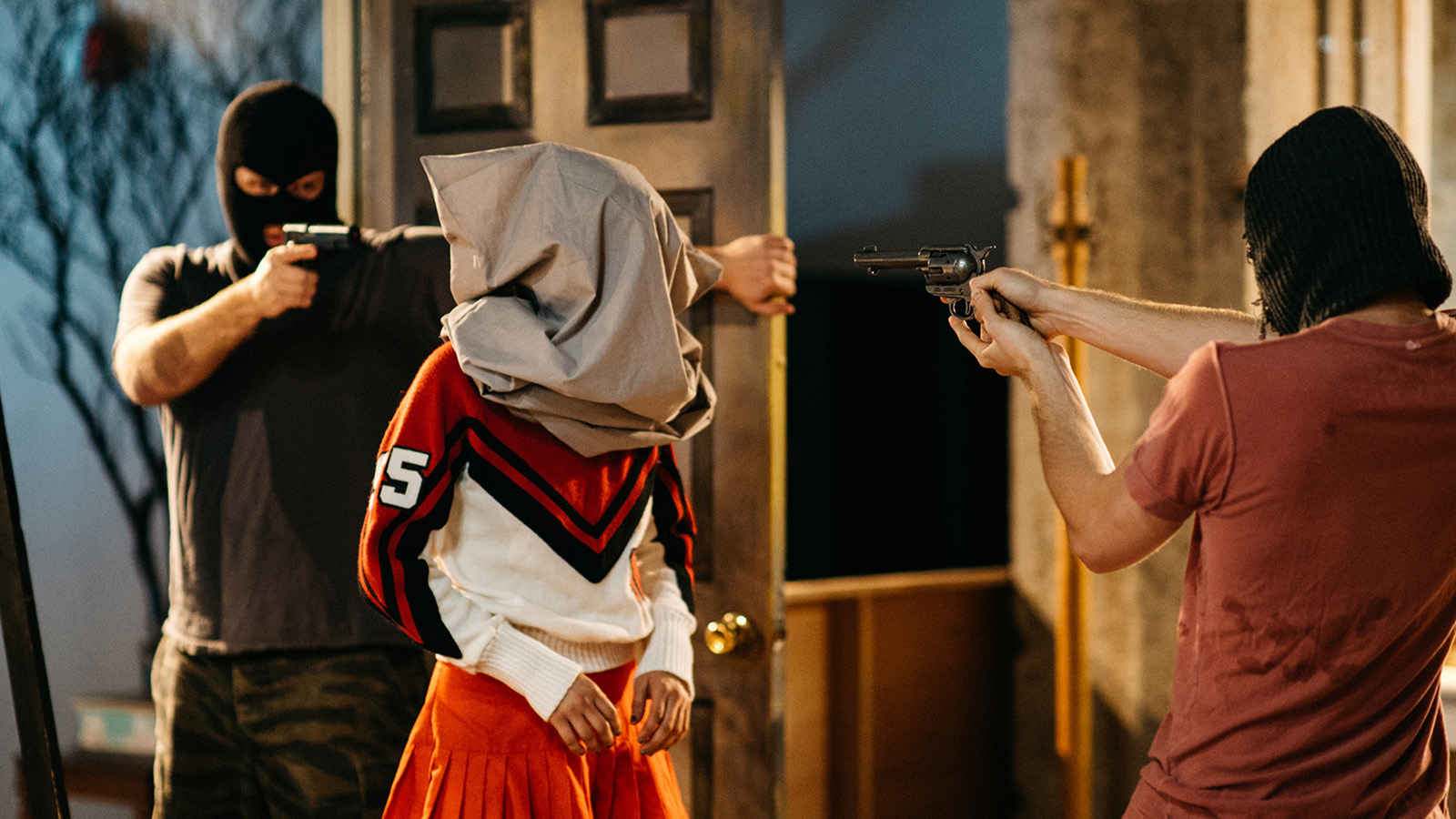 Alumni Walt Gray IV, Lila Gavares and Derek Chariton star in “Desert Rats,” a dark comedy in which two brothers kidnap a wealthy, young girl in order to extract a ransom from her father.
(Courtesy of Giovanni Solis/bracero)

“Desert Rats” places a group of often underrepresented people on the stage.

The play, staged at the Los Angeles Theatre Center through Nov. 18, follows brothers Frank and Jesse as they kidnap Amber, the daughter of a wealthy man, in an attempt to escape their economically precarious situation. However, Jesse and Amber begin to bond over their similar life experiences despite coming from seemingly different worlds, causing Jesse to rethink his actions. Director and UCLA alumna Angie Scott said the play centers around discussions of wealth, commenting on human similarities that transcend social class. Scott said the term “desert rats” describes a subset of people who live in deserts, typically in Southern California. Their locations are often overlooked; for example, Barstow is typically viewed only as a city to stop in while traveling, she said.

“(Desert rats are) people who live off the grid and tend to be on the fringes of society,” Scott said. “They’re not necessarily in the know of what’s happening in the world around them; they’re just trying to get by.”

Growing up as a desert rat and not interacting with many people outside his family, Jesse lacks social skills, Scott said. His older brother, Frank, took care of him after being abandoned by their parents, and he only really knows love from his younger brother, Scott said. Alumnus Walt Gray IV, who plays Frank, said his character has spent his life providing for his younger brother and would go as far as kidnapping a girl in order to provide a better life for him. Jesse, on the other hand, is more reclusive, relying on his brother for guidance, Scott said.

Unlike her captors, Amber grew up in extreme wealth, Scott said. Alumna Lila Gavares, who portrays Amber, said that although audience members may begin the show rooting for Jesse’s sympathetic situation, they will quickly relate to her own character’s struggles. She is initially presented as a stereotype – a rich girl who lives in Calabasas, California, cheerleads and goes on luxurious vacations. However, Scott said Amber deals with underlying trauma, having lost her mother and endured her father’s abuse. In emphasizing the similarities between Amber and Jesse – both having survived abusive relationships and experienced the loss of family members – Scott said the production humanizes both wealthy and poor people.

“All three characters are presented as stereotypes or people who are seen a certain way by social norms,” Scott said. “We get to really examine who these people are and what makes them human.”

Initially, Jesse rails against Amber for her wealth, stating that her money means she must have a wonderful, problem-free life. Amber responds by stating that she lost her mother and has lived with her father’s subsequent wives. Gray said this scene shows people bonding despite their apparent differences, as Jesse begins to understand the struggles each have endured. Though the brothers believe money will transform their lives, the play reveals that wealth will not solve their familial issues.

“Everyone’s miserable. It doesn’t matter how much money you have,” Gray said. “The boys think money will change everything, and it won’t.”

Gray said “Desert Rats” portrays the desperation people feel when they have no other options and the lengths people will go to improve their lives. In focusing on the extremes of poverty and wealth, Gavares said the play reflects the current state of America and its wide income gap. In presenting a tangible social truth that affects multiple social classes, the play reaches all types of audiences, allowing people to enjoy the plot’s content rather than feel dreary about it, she said.

“People are able to laugh because it touches on these truths,” Gavares said. “It brings to light … the conversation of privilege and people of different backgrounds being forced to have a conversation.”