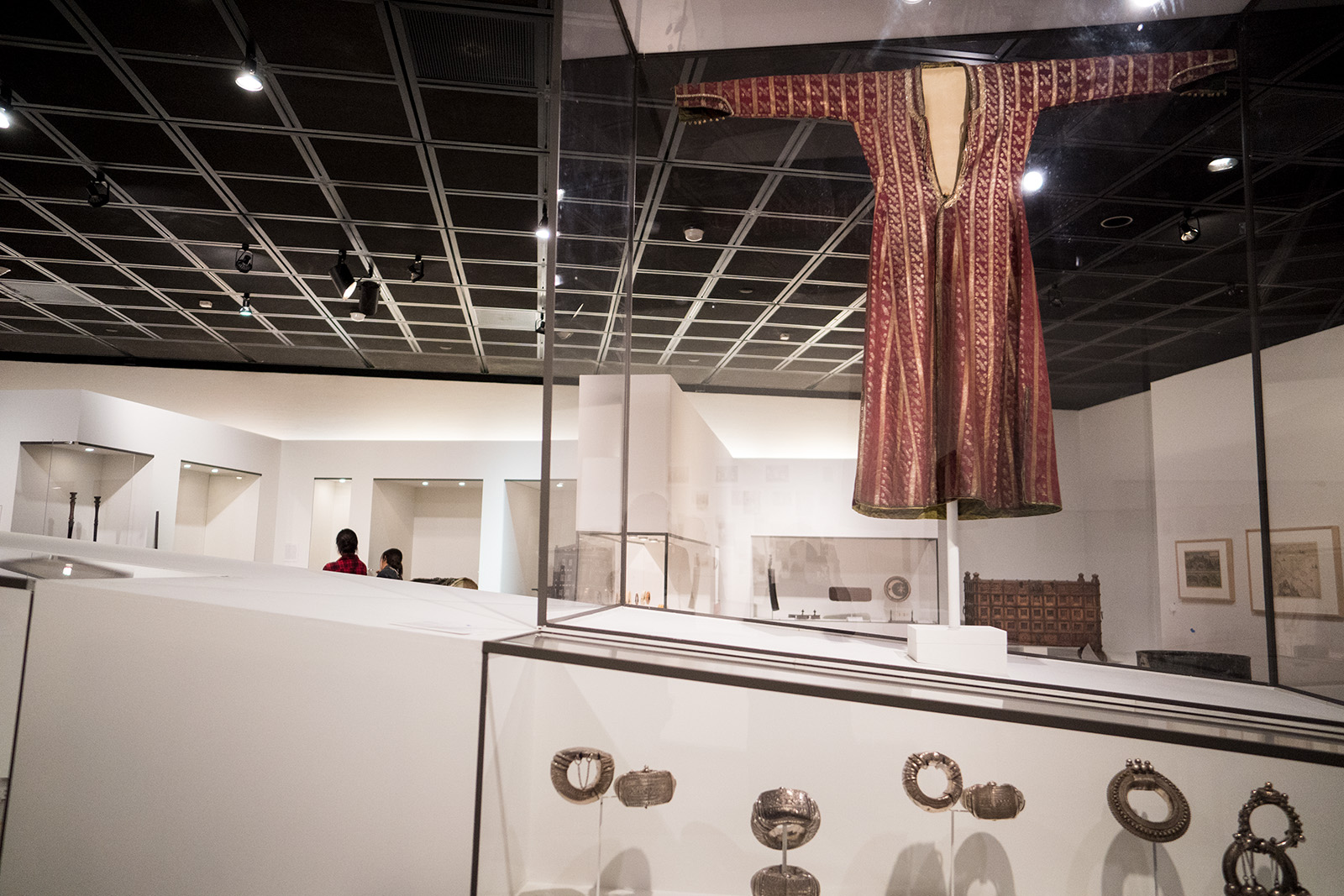 “World on the Horizon: Swahili Arts Across the Indian Ocean,” will be on display in the Fowler Museum on Sunday until Feb. 10. The exhibit holds a collection of art and artifacts from East Africa, specifically the Swahili coast. Erica P. Jones, associate curator of African arts at the Fowler, said the collection is meant to explore the significance of the Swahili coast to the rest of the world. (Niveda Tennety/Daily Bruin)

World on the Horizon: Swahili Arts Across the Indian Ocean

Objects that have never left Kenya before are now traveling America.

“World on the Horizon: Swahili Arts Across the Indian Ocean” is an exhibition opening Sunday and on display until Feb. 10 at the Fowler Museum. It brings together art and artifacts from East Africa, exploring ideas of location and trade through cultural connectivity, said Allyson Purpura, a co-curator of the traveling exhibition and senior curator at the Krannert Art Museum. The exhibition’s opening program is Saturday from 6 p.m.-9 p.m., and aims to explore the Swahili coast’s significance to the rest of the world.

“All of the sections come together around materiality, space, and mobility,” Purpura said. “Mobility moves throughout the entire exhibition. … This space gives us an arena to explore the aesthetics and lives of their (transcultural) region.”

Purpura said mobility and materiality manifest themselves through the objects, creating an interconnected web of cultures when moving between regions. The mobility seen throughout the exhibition not only comes from where artifacts are found, but also the origins of visual qualities, such as the form and decorative elements, she said.

Erica P. Jones, associate curator of African arts at the Fowler, said the theme of the exhibition it to show Africa, especially the Swahili coast, positioned as an influential facet of the trade world. Jones said most people know about migratory patterns away from Africa, in the slave trade and other similar events. However, the exhibition is focused on how the coast engaged with the broader trade world from their home base, Jones said.

“There were number of pieces of jewelry that were collected and worn in Zanzibar, but they were designed with traditions from Central Africa, India and Oman,” Purpura said. “So in one object, you find mobility.”

Purpura said Africa is vital to the global world in terms of trade and culture, and she wanted to tell a story of its connectivity and cultural confluence with other regions of the world. She said she chose the artifacts and art to expand people’s knowledge of the history and aesthetics around the Indian Ocean through the intermingling with other countries and regions.

The exhibition is separated into six sections, including “Architecture of the Port” and “Ocean of Adornment,” looking at objects like doorposts, necklaces and sandals. Jones said objects from certain areas of the Swahili coast help expand on the idea that Africa has material and locational significance to the rest of the world, such as though trade with other countries.

“You start with the object and think of the stories they tell, and you come up with the stories you want to tell, and see if you find objects that instantiate those stories,” Purpura said. “It’s bringing together people from the Western Indian Ocean world, as well as the continent of Africa, as well as Europe – it’s truly a node of the global world.”

Jones said the six sections are located in a way that allow for a progressive narrowing of perspectives as one walks through the exhibition, from looking at the broader trade routes in and around East Africa, to architecture of the Swahili coast, to personal items of people living in these areas.

Sebastian Clough, director of exhibitions at the Fowler, designed the layout of the exhibition to embody the visual experience of “World on the Horizon.” He said his design was meant to mimic the architectural designs used in the Swahili coast, like niches in walls used to display objects. Clough said he created display cases that mimic the way objects are displayed in East Africa with the hollowed out shelves. He said the flow of the displays allows for a distinct identity of cultural exchange for the collection, rather than a piecemeal, assortment of objects through the distinct sections of the exhibition.

“What’s interesting about this show is that it blurs the line between fine art and utilitarian objects,” Clough said. “So when you look around, there’s body adornment, kitchen and household things, there’s architectural elements and what we consider as art. All those things are presented together without much distinction.”

Jones said the collection is a jewelry box of treasures because of the mix of small aesthetic items with larger, majestic architectural pieces. She said she hopes the exhibition will bring awareness to culture and life on the Swahili coast that people may not be aware of.