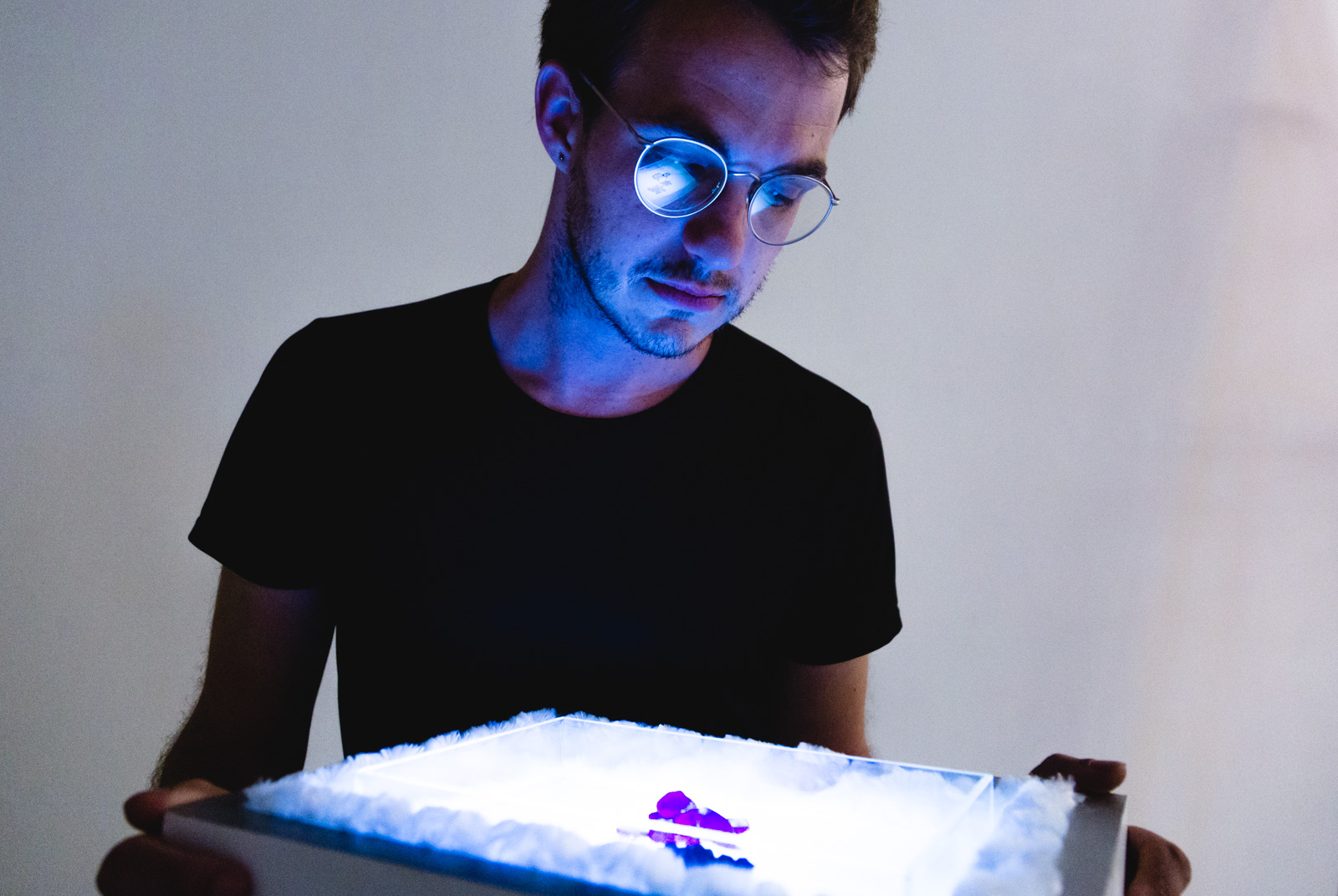 MFA student Samuel Congdon is one of the artists participating in Thursday’s “Convolution” exhibition. The preview show aims to explore consciousness through senses like slight, smell and sound, integrating technology and performative art. Congdon’s piece features glowing pedestals and a musical component, paying homage to past loves. (Amy Dixon/Photo editor)

“Convolution” explores consciousness through light, sound and the scent of a kombucha scoby.

Hosted by UCLA Design Media Arts, the “Convolution” exhibition will feature the works of 11 2019 MFA candidates at the New Wight Gallery in UCLA’s Broad Art Center. The fall preview show, a precursor to the spring thesis show, bridges the gap between science, technology, engineering and math, and art by incorporating technical aspects into the artists’ broader messages about consciousness, said artist and MFA student Samuel Congdon. Taking place Thursday, “Convolution” will display immersive virtual reality pieces, as well as more traditional projections, onto screens or television sets. The artists explored concepts of consciousness through the senses with performative art and scent-based installations.

“I’m a performer who’s also interested in sculpture and installation and I’m trying to figure out how to merge those worlds and have a greater sense of precision in my sculptural work,” Congdon said. “I really tried to create an installation that could stand on its own and be a unique place to perform within.”

Computers are the basis of each art piece in “Convolution,” though the method by which they are incorporated varies from artist to artist, said Congdon. Although many of the artists will display just one piece, most of the installations have multiple working components. Congdon’s piece, titled “Lover’s Garden,” is a collaboration with his drag performance alter ego, Tulva, and consists of four intricately carved pedestals, an homage to past loves. Inlaid with resin and topped with acrylic to create a glowing effect, the pedestals also hold an impromptu music setup to engage the sense of hearing with jumbles of cables, a synthesizer and two microphones, re-enacting past loves.

“It’s a bit like how people play Beethoven for plants in that the performative aspect is meant to be nurturing or an upkeeping of these memories of past relationships,” Congdon said.

Other works combine technology with philosophy, posing questions about the fate of humankind as a whole, said artist and MFA student Paul Carlo Esposito. Incorporating ideas reminiscent of classic science fiction, Esposito’s piece plays upon the senses of sight and sound, featuring three nonhumanoid soft robotic organisms living on rocks in the far future. The organisms discuss human fossils and extinction with the same curious tone we use to discuss dinosaurs.

The organisms, depicted in a jellyfishlike form, also plays with ideas of aesthetics and the relations between artificial life and empathy. The animal-like sounds they make, as well as their unusual appearances, can further frustrate the feeling of empathy for a nonliving being that appears alive, Esposito said.

“The piece is more specifically a kind of rumination on the flaws in the human species that prevent them from becoming a collective superorganism that would better manage their presence on the planet,” Esposito said.

For scent-based installations, MFA student Maru Garcia will be presenting her kombucha scoby, a symbiotic culture of bacteria and yeast, that uses nanocellulose films to ferment the tea, along with video projections. The piece aims to investigate the scoby’s symbiotic process through bacteria, yeast, plants and humans, exploring their conscious shared experiences.

Artists at “Convolution” also take commercial technology and use it as art, subverting it for their own creative purposes. One such artist, Christina “Phazero” Curlee, will be presenting her video game, “Artifacts 2.” The game deals with childhood trauma and neglect from the viewpoint of survival as it relates to the internet age. “Artifacts 2” operates on the sense of vision and sound to convey a message about mental illness and the danger of poorly prescribed remedies that are often disseminated through the internet.

The layout of the game opens in a desert dreamscape, with the main character narrating the previous events – the narration is framed as a letter to guardians who have failed the main character. Players are able to become visually immersed into each new dreamscape by playing the video game.

“My game is half poetry and half using aspects of traditional gaming, but using them in a way that’s more experimental and more surprising,” Curlee said. “It tells the story not from events that happen, but from inside of (the) person experiencing it.”

Though the media artists involved in “Convolution” all make art through computers, they each explore differing aspects of the digital world. The artists, through smell, sight and sound, merge together worlds that traditionally have little interaction, like video games and the practice of art, Curlee said.

“I think that with all of our mediums this idea of questioning what reality is and how we engage in it in a very postdigital world is worth wondering about and worth questioning,” Congdon said. “We think about how the digital confuses those boundaries of consciousness and reality.”