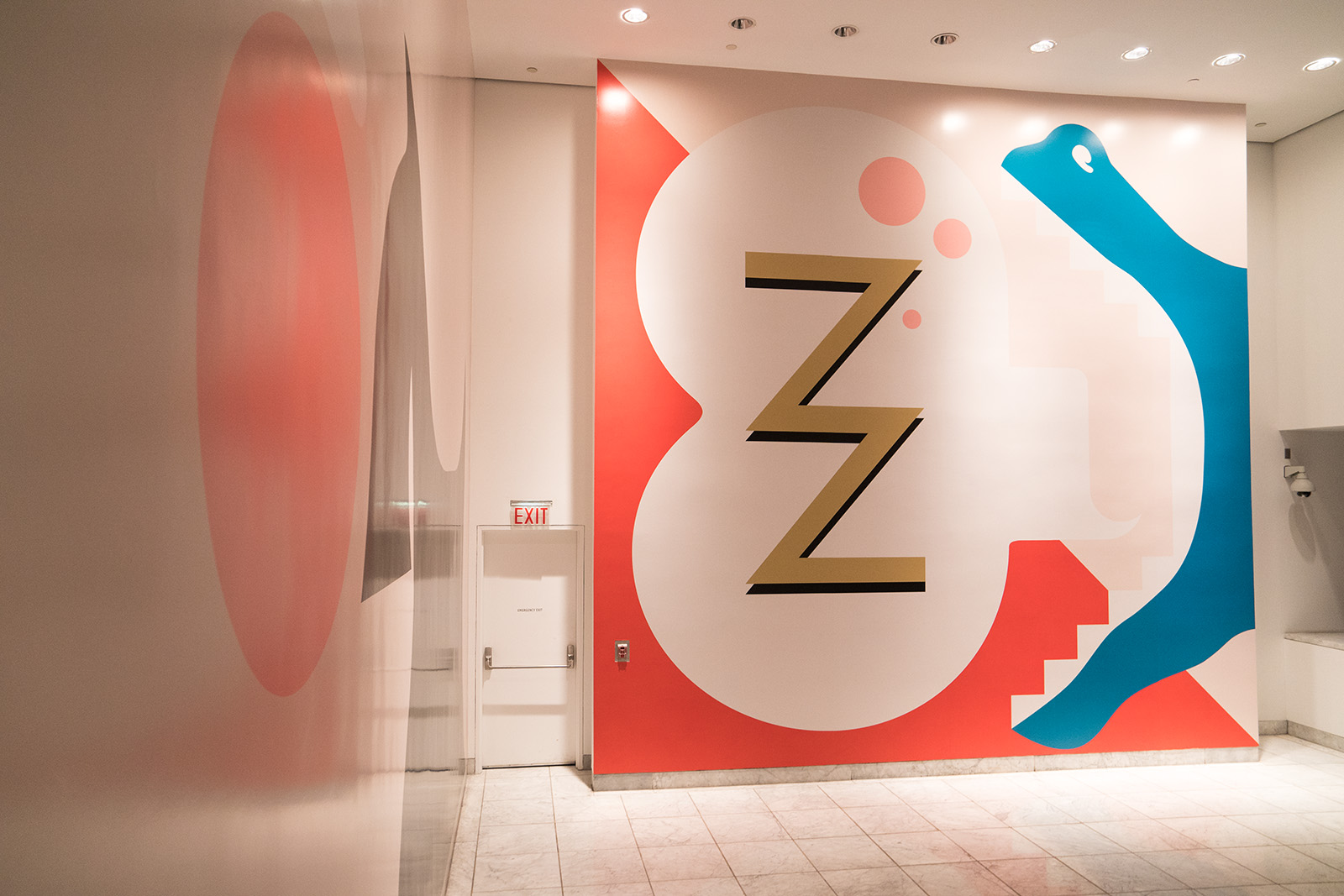 Alum Math Bass’ mural is now on display at the lobby of the Hammer Museum. Bass has been building up a repertoire of symbols as a part of their artistic language for the past six years, with the mural featuring a number of the images.
(Niveda Tennety/Daily Bruin)

The piece, created by alum Math Bass, was first unveiled Saturday and will be on display until Feb. 10. Featured on the lobby walls, “Pink Dots” is one of the Hammer Projects, a series that provides museum space to different artists. The mural features the symbols Bass has built up over their career, culminating in abstract images that exist within a 2D plane. Though Bass was confined to the space provided, they said they focused on highlighting their specific style of art within the space.

Before beginning the project, Bass visited the Hammer to observe the space they would be working within. The location served as a new challenge for Bass – the artist is more familiar with working within the confines of a frame or a canvas, they said. To cater to the architecture of the Hammer, Bass said they approached the two walls perpendicular to the museum’s lobby as if they were two canvases, as each wall was fairly square-shaped.

The main wall of the museum is where Bass broke away from the structured canvases they were more accustomed to. In order to move with the angles of the space, Bass said they wanted the art to flow with the area. The mural now follows the path of the stairs, leading visitors to the main exhibits.

For the last six years, Bass has been building up a repertoire of symbols as a part of their artistic language; they began with five symbols and now have around 30 used throughout their work. While some are easy to identify – a silhouette of a Scottish terrier, for instance – other shapes are more ambiguous. Bass said the symbols are a significant aspect of their work, and it felt appropriate for the mural to match their personal art style.

“Some of the symbols shift between being bodily and textual, but others are less clear,” Bass said. “I’m interested in the openness of the symbols, so they’re not meant to symbolize specific things.”

Vanessa Arizmendi, a curatorial assistant of the Hammer who helped organize the exhibit, said Bass’ use of icons and symbols plays with viewers’ interpretations of everyday objects. Many of the symbols manipulate size, either blown up to an unnatural scale or shrunk down to the size of a human body. The mural includes a bone the size of a grown man, in addition to letters like “B” and “Z” scattered throughout. The icons also seem to interact with each other, she said, such as a white leg appearing to kick a pink ball to a large dog.

“(Bass is) sort of trying to remix (the images) and put them in different situations. … They like to talk about their work as sort of queering an experience for viewers,” Arizmendi said.

Barbara Kruger, a professor in art, worked with Bass during the latter’s time as a graduate student, and said Bass’ work is often purposefully cryptic and open-ended, without offering a specific message. In doing so, Bass’ work often plays with the viewer leaving their comfort zone upon seeing the distorted images, she said.

By incorporating a variety of seemingly unrelated symbols, Arizmendi said Bass invites viewers to first experience confusion, and then decide for themselves what they want the piece to mean. The mural allows viewers to leave the museum with what they pulled from the piece, instead of relying on the artist or the museum to dictate an interpretation for them, she said.

“The idea is that the viewer sort of encounters this installation with all these objects that they might know in their everyday life, but they’re in new contexts and new situations, and that’s where the ambiguity really is from,” Arizmendi said. “It’s really about sort of regenerating these images in new ways and sort of trying to disrupt the comfort with which we think we know them.”