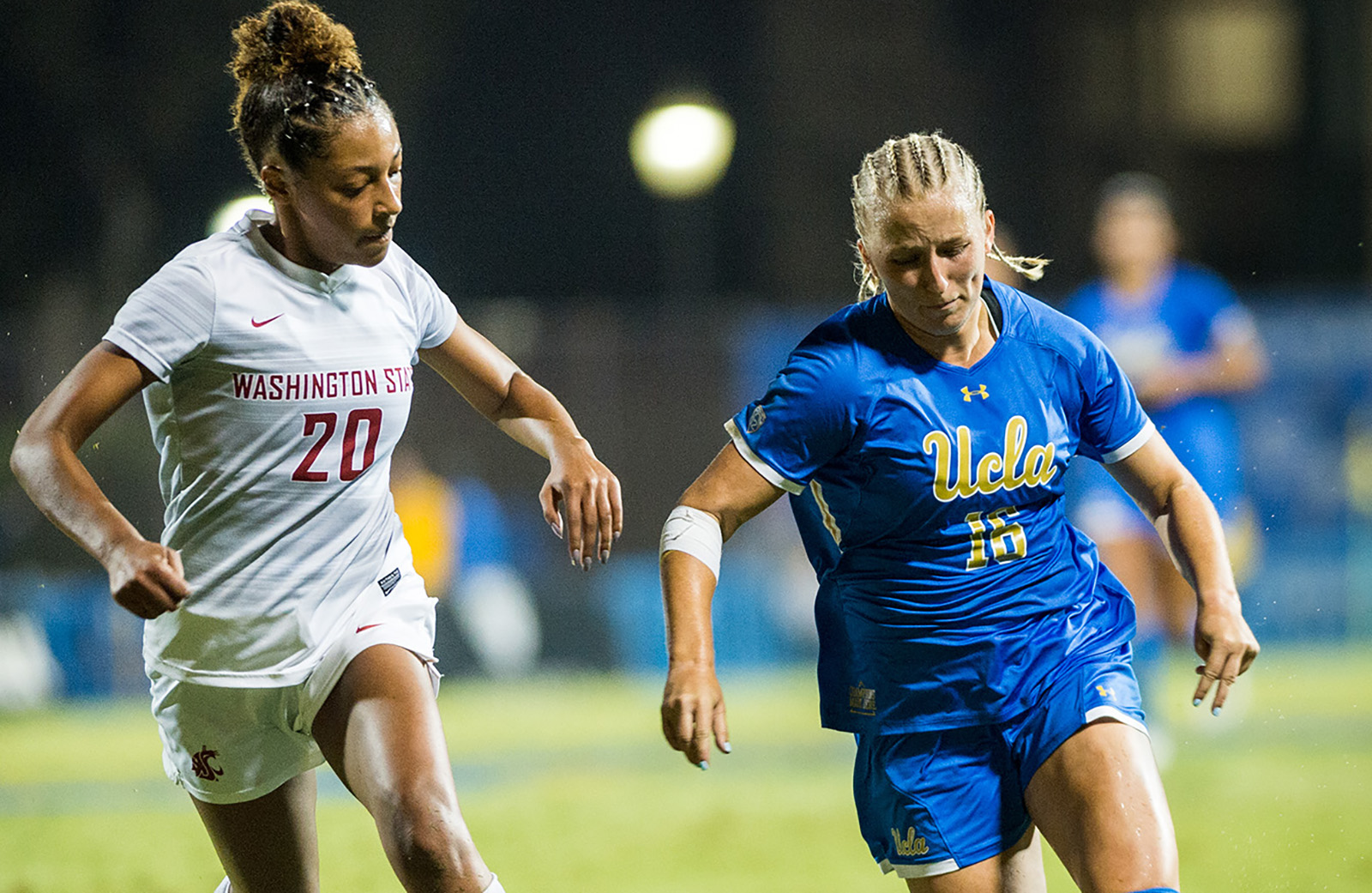 Senior forward Hailie Mace earned her first cap for the United States women’s national team in April and continues to be recalled. The U.S. will be competing for a place in the 2019 FIFA Women’s World Cup in France. (Edward Figueroa/Daily Bruin)

Having top players has come with a cost for the Bruins.

UCLA women’s soccer (6-3-1, 1-2 Pac-12) has been hindered by losing players to national team duty, with a 1-2 record in conference play so far – including a loss to No. 1 Stanford (10-0-1, 3-0). Senior forward/defender Hailie Mace and junior midfielder Jessie Fleming were both called to the 2018 CONCACAF Women’s Championship for the United States and Canada, respectively.

This season, the Bruins have scored 19 goals through 10 games, with 159 shots and 83 on target. Over the same period in the 2017 season, without absences from Mace or Fleming, UCLA recorded 27 goals with 154 shots – 75 of which were on target. Mace netted seven of those goals in the first 10 games and Fleming had accounted for two goals and six assists.

The drop could be due to the strength of schedule this year, but despite the Bruins recording close to the same number of shots and shots on target, they have lacked the same goalscoring prowess of early last season.

Mace and Fleming were both placed on the MAC Hermann Trophy Watch List prior to the start of the season, an award given to the best collegiate female soccer player in the nation.

With the tournament group stage set to run to at least Oct. 10 and Oct. 11 for Mace and Fleming, respectively, the duo will miss two more Pac-12 games against Arizona and Arizona State, and potentially the matchup versus Washington. But their absence could be prolonged until Oct. 17 if both national teams advance to the final or to the third-place playoff match at least.

With the United States and Canada heavily favored to advance further in the tournament, that looks ever more likely, and the two players could return with only four Pac-12 matches left to play.

Of course it is every player’s ambition to represent their national team, especially in major tournaments like the CONCACAF tourney where Women’s World Cup qualification is on the line. Fleming has also become a mainstay for the Canadian national team, with 53 appearances for the side since 2014, logging six goals and two assists.

For players like Fleming, an international call-up has become as common as collegiate play, forcing them to split time between the two. Mace has had continued appearances and call-ups since earning her first cap in April and repeated call-ups could allow her to earn a spot on the team.

A positive is that two UCLA players get the chance to practice and play at the highest level in women’s soccer. Aside from in professional women’s soccer leagues such as the National Women’s Soccer League in the U.S., international matches are regarded as the highest quality of play a collegiate soccer player can experience.

Despite call-ups being a challenge all programs with promising players have to deal with, scheduling should be reassessed to accommodate collegiate players more and to not have many of the best players in the nation miss long stretches of the season.

Organizing events like continental tournaments means balancing the NWSL schedule that runs from March to September with college matches. But there can be a compromise between international and college games.

One example where a compromise is reached between the two is the system USA baseball uses. Players are able to complete entire seasons with their schools before joining collegiate national team camps to undertake gameplay in the summer months.

The men’s CONCACAF tournament is held every two years, and like baseball internationals, takes place in the summer – typically in July. Although this interferes with the Major League Soccer season, when many CONCACAF nations’ players play, these players at least aren’t penalized by their professional teams for missed time.

Although the absence of veteran players means that younger squad members can gain more experience and rack up minutes, losing key players for long stretches, especially during conference play that determines postseason fortunes, will damage the outlook of a program’s season.