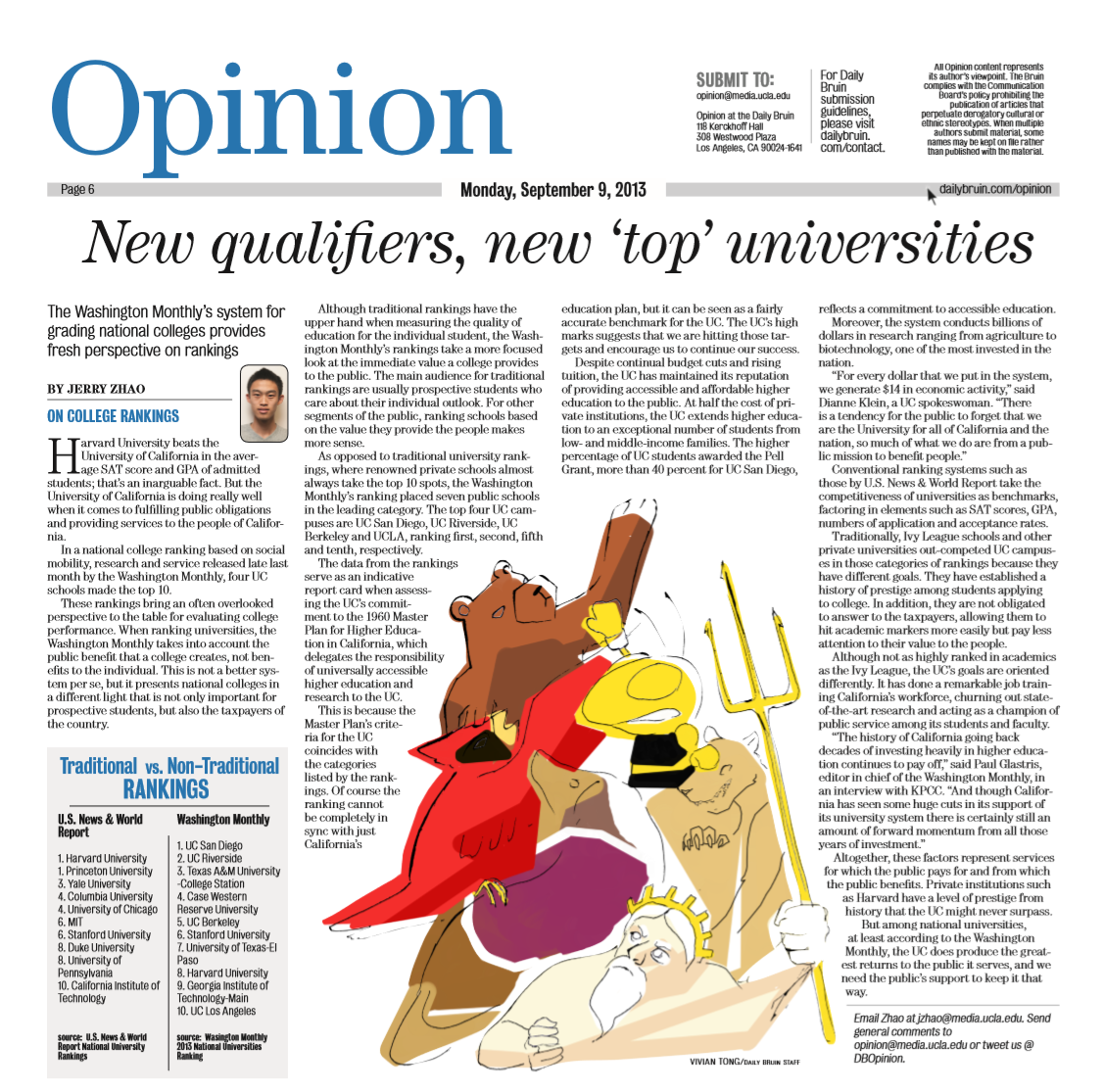 In case you haven’t heard, UCLA has officially mounted the summit – also known as the top spot for public universities on the 2019 U.S. News & World Report’s Best Colleges ranking.

UCLA has fought hard for the position for quite some time now, after tying with UC Berkeley for the No. 1 spot in 2018. In 2017, UC Berkeley rang in its 19th year of being No. 1 on the Top Public School among National Universities list. UCLA has steadily climbed its way to the top, and the students have never felt more proud.

Just five years ago at this time of year, however, UCLA’s ascension was more humble. In September 2013, the Washington Monthly magazine introduced a different breed of “top” universities, which aimed to consider the “public benefit that a college creates.” This new ranking focused more on the universities’ benefits to their respective communities rather than to their students.

The University of California’s goal of providing accessible education to prospective students had a chance to shine in the “nontraditional” ranking. Whereas Ivy Leagues have historically been competitive and pricey, the Washington Monthly ranking gave a nod to schools that have given students a chance at higher education – whether they need financial aid, are first-generation college students or are otherwise unable to obtain a private school education.

This year, the Washington Monthly ranked UCLA ninth for national universities – only a few places behind universities like Harvard, Stanford and Yale.

There are a number of factors the Washington Monthly likely took into account in its UCLA ranking. Thirty-five percent of undergraduate students at UCLA receive the Pell Grant, ushering in a community of students who can’t afford other institutions. UCLA’s in-state tuition comes in at $13,260 for undergraduate California residents, a much lighter price tag than most private institutions. The UC system is so accessible that it’s becoming increasingly harder to get admitted to one of its campuses, resulting in an air of competition and prestige.

The Washington Monthly’s initial review pushed UCLA and the UC system into the spotlight, and the campuses have only gained momentum from there. Times Higher Education considered eight UC campuses a part of its “elite group,” with UCLA and Berkeley taking the No. 1 and No. 2 spots. Similarly, according to The New York Times College Access Index, UC Irvine, UC Santa Barbara, UC Davis, UC San Diego and UCLA are some of the best colleges for upholding the “American Dream” sentiment.

Students can now brag about being “the best,” but it’s important to remember how UCLA and the UC system started out: not with the goal of being the most prestigious, but aiming to serve the community in hopes that the community would respond in kind. It’s fair to say the UC system got its wish – and more.