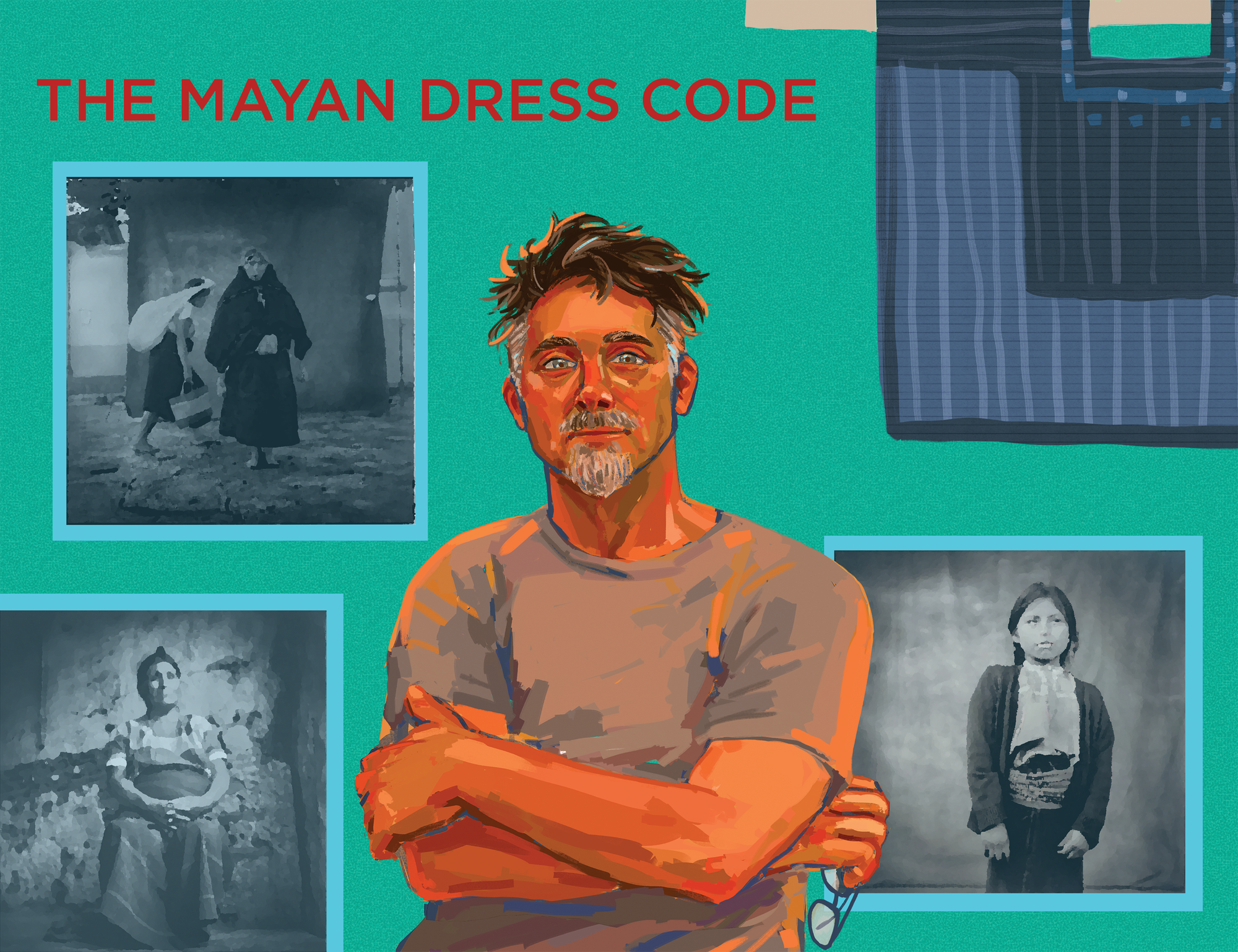 Craig Dietz set up a portable photography studio in a church plaza with natural lighting, waiting for a subject to animate its black canvas background through lively expressions and traditional Mayan garments.

His black-and-white analog photographs of indigenous peoples from Chiapas, Mexico were then scanned, edited through GNU Image Manipulation Program software, printed on fiber-based paper and finally, sepia-toned. The final products were hung alongside traditional Mayan textiles earlier this month at the Ferry Building Gallery in West Vancouver as “The Mayan Dress Code: Legacy and Continuity in Chiapas, Mexico.” Although captured between 2000 and 2005 as part of his “Gente De Chiapas” series, the photographs function as lasting memories of his interactions with subjects, the alumnus said, while allowing visitors to better visualize the dimensionality of Mayan textiles.

“Those images were crucial for this particular show so that people could see what the clothes look like on a human being, not on a wall where there is no dimensionality and no head, arms or legs associated with them,” he said.

Dietz, who also goes by Cisco, arrived at San Cristóbal de las Casas, Mexico in 1994, by way of New Orleans, having previously lived in Los Angeles, where he worked in commercial photography. Two decades before his move to Mexico, Dietz taught summer extension photography courses at UCLA. After settling in Mexico, he said he launched his photography school, Aper Tours, to connect back to the teaching roots he had established while at UCLA.

Aper Tours workshopgoers embark on excursions to different regions of Chiapas in search of natural lighting and captivating subjects, Dietz said. Dietz said he deliberately chose to capture the portraits with a neutral background like his personal hero Irving Penn had done throughout the 20th century. The effect, in turn, helped broaden the exhibition’s focus on purely textiles to the wearers of the garments, he said.

Don Moritz, a former student of Dietz, said he was able to not only hone his photographic skills but also learn about the lifestyles of indigenous peoples. Moritz, who has attended different photography workshops throughout Europe, said Dietz’s deployment of his portable studio allowed them to interact with subjects and the local native weavings they wore at Saturday bazaars. He said Dietz’s alternate approaches to photography, like positioning subjects off-center, using a neutral background and shooting in black and white, helps to emphasize the depth in each of his subjects.

“There is a classic form of taking pictures that comes with a lot of silly rules that (Dietz) throws out the window,” he said. “I’ve taken other workshops in Spain, France and Italy, and (Dietz) was the only person who set up a portable studio and worked in this particular style.”

Dietz said he uses a personable demeanor when he approaches subjects, offering a small sum of money in exchange for them lending their time as a subject in front of his background. Using a 120×120 twin lens Yashica camera also permitted him to establish a deeper connection to his subjects through eye contact and body language, he said. Because the camera’s viewfinder is located so the photographer can view the image from above, at waist level, Dietz said his face was unobscured by any piece of equipment. He said he crouched before his subjects to establish a connection with them through verbal and facial expressions.

“I’m 6-foot-1, but when I’m down low and I don’t have the camera in front of my face, I’m approachable because I am there with them,” he said. “That allowed people to feel very comfortable being in my altered world, which is in front of a backdrop.”

The personal and intimate quality of the photographs have proved to elicit emotional reactions from visitors of the exhibition, said Natalie Roizman, the community arts supervisor of the Ferry Building Gallery. One of the photographs features a woman and three girls wearing traditional skirts, which Roizman said is impactful in displaying how clothes remain a strong part of familial and community identity.

“The intimacy is in the gaze, the proximity to the camera, the detail and expression on people’s faces, shadows, families touching, holding hands and carrying their babies,” she said.

Alongside the emotive photographs hung intricate textiles made of materials like natural spindled cotton; synthetic-colored threads of vibrant violet, pink and blue hues; ribbon; and satin, Roizman said. Woven by the Tzeltal and Tzotzil indigenous groups and collected by the exhibition’s curator Fabiola Sanchez, the clothes are decorated with checkered, striped and floral patterns in cross-stich embroidery. The textiles and photos were paired such that they hailed from the same area.

Although she was initially puzzled by the black-and-white photos used to represent the colorful textiles, Roizman said the photos allow viewers to focus on the individuals who embody the garments. Because traditional Mayan textiles have remained mostly unchanged over time, she said the black-and-white photographs effuse a sense of timelessness and continuity. Traditional garb like huipil, a loose-fitting tunic, and blouses serve as a form of communication, identity and sense of belonging within the cultural community, an element that Dietz’s portraiture brings to light, she said.

Although he has since shifted toward creating one-minute movies and symbolic portraiture, Dietz said these series of photographs remain crucial markers of personal connection and diversity alike.

“I want them (visitors) to connect with humanity and the beauty, richness and diversity of people,” Dietz said. “We are not all white Americans, we are individuals of color and race who are different and that is, in my heart and soul, what makes humanity so beautiful.”