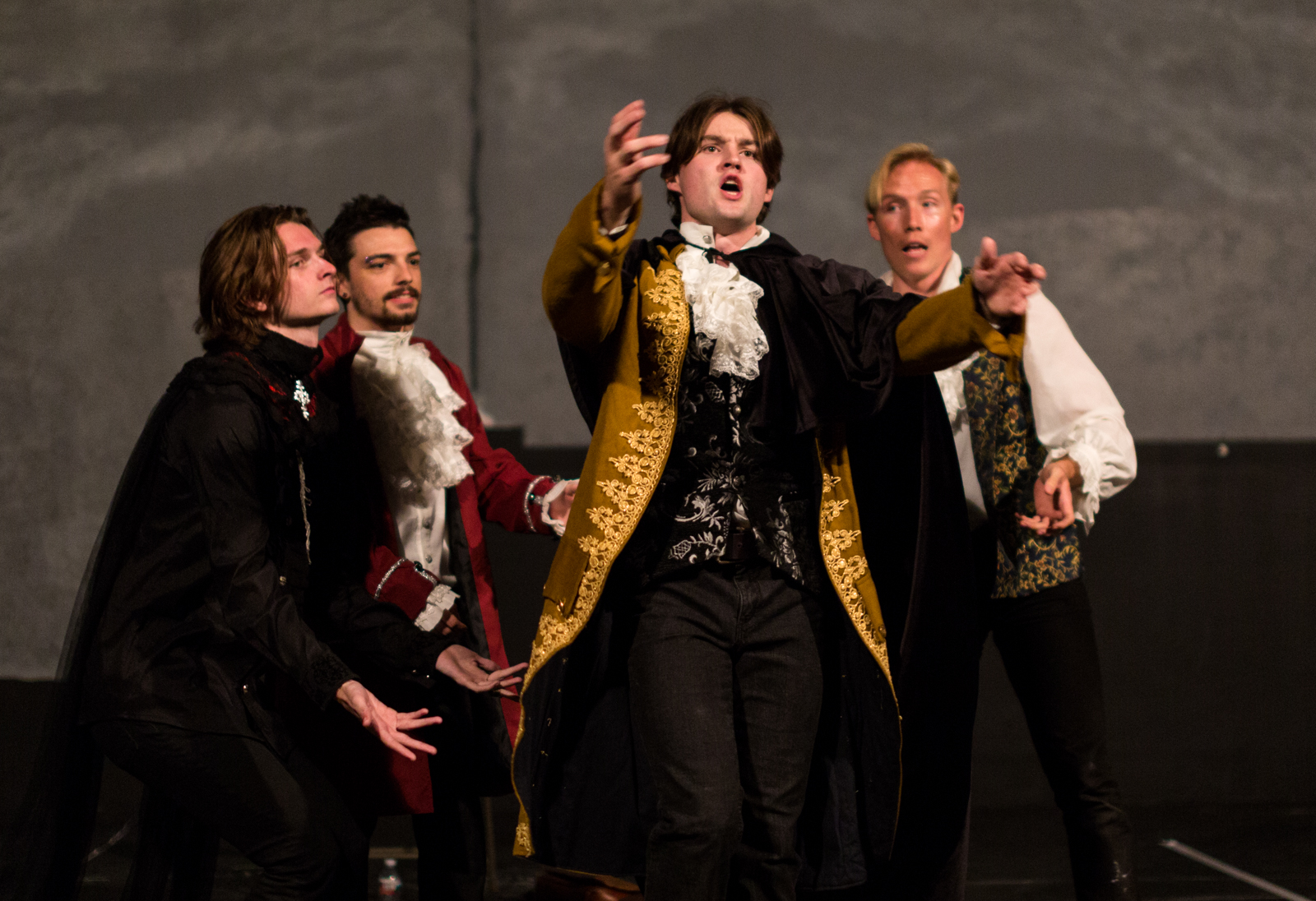 A vampire gang from the 19th century competes against a modern-day vampire group in “Blood Rock: The Musical.” The choreography for each gang represents their differing backgrounds. (Amy Dixon/Photo editor)

“Blood Rock: The Musical” opened to the public at the Odyssey Theatre Ensemble on Thursday. UCLA alumnus Thomas Hollow stars as protagonist Paul Figatner, the son of a vampire hunter. The musical follows two rival gangs of the undead during the investigation surrounding the death of Paul’s father. Longtime vampire fan Michael Berns, the composer and co-writer of the show, said he wanted to create a more humorous take on the supernatural beings and incorporate character development through music and choreography.

“The visuals added to the songs have made (them) much more compelling,” Berns said. “Before, they were just songs and now they have lifts and some really interesting choreography.”

The show features rock and pop music as well as more traditional theater songs, with violins, woodwinds and brass instruments playing alongside guitars. Most of the song genres were selected based on the tempo and mood of each scene, Berns said. The choreography incorporates jazz, musical theater dance and even tango to work with the score, said choreographer and UCLA alumna Kyra Burns.

“The songs … give a lot of feedback in what the movement should be because the lyrics are so animated,” Burns said.

Burns’ choreography plays with the discrepancy between the seriousness of the vampire trope and some of the characters’ comical personalities. Instead of a dark, dramatic romance sequence that an audience would expect out of a supernatural love triangle, Burns has one vampire use finger guns to shoot down another’s crush on him while the same arm is wrapped around the reporter he’s trying to seduce.

Burns said she also utilized the space of the stage, having actors interact with set pieces and props to enhance the humor and tone of the show. Cast members jump on and off coffins and caskets. Carnoli, the vain leader of his vampire gang, moves between an easel and a paint stool in an exaggerated, pompous manner for humorous effect, displaying his self-absorbed nature.

The choreography also reflects a major difference between the vampire gangs, Burns said. Carnoli’s gang of vampires are unfamiliar with modern-day life because they have been trapped in caskets since the 1800s, and their thirst for blood makes them the villains. Meanwhile, Blood Rock, Paul’s gang, has been adapting to modern times and technologies. Consequently, Burns choreographed hunched-over movements for Carnoli’s gang. In contrast, members of the Blood Rock gang, who have been living in the present day nonviolently, perform with upright, snappy movements.

Similarly, the choreography illustrates that the Blood Rock gang acts as a close-knit unit. Carnoli’s gang, on the other hand, treats Carnoli as its leader. The choreography reflects such character dynamics, Burns said, and includes sequences in which Carnoli remains in front or is lifted up by others.

Since every cast member has a named part, each vampire moves in a manner that reflects their individual persona, such as a model who moves more seductively than the other vampires. Hollow, who is also the assistant music director, said the gestural work in the show helps the actors move in ways that reveal their characters’ true thoughts and personas.

Hollow said the choreography also shapes parts of his own character, such as with a romantic tango that required bodily control and helped him capture the confidence needed for his character. Toward the end of the show, Hollow sings while moving aggressively, which aided him in grounding the character’s strength, he said. Because the songs are physically demanding to sing, Hollow said the determination he found within himself translated into determination within Paul Figatner, who overcomes obstacles such as the death of his father.

“With this show, every single line that I sing and every line that I speak … is very intense,” Hollow said. “Whether it’s plot-driving or character-driving, it has really motivated me through the role.”