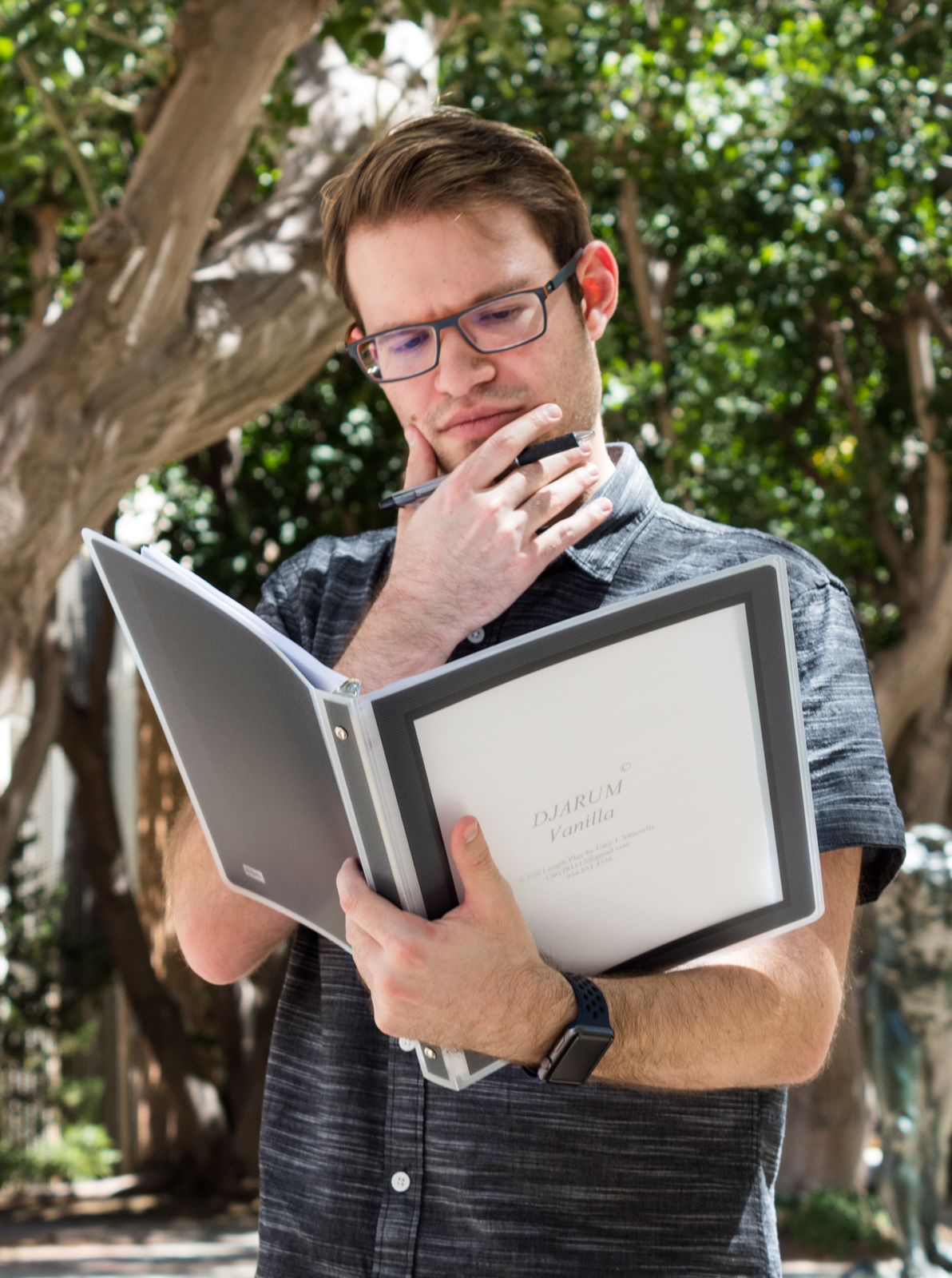 Cary Simowitz’s law school colleagues skipped exams to protest the 2014 Darren Wilson verdict in the streets – he wrote a play about the issue instead.

The graduate playwriting student further developed and staged a reading of his play “Djarum Vanilla“ at the annual Kennedy Center New Play Festival at the beginning of August. The full-length drama focuses on the dynamic between dual protagonists living in St. Louis, Missouri after the shooting of Michael Brown. The characters’ bond strains against the harsh realities of an unjust America as the city reacts to the verdict. Simowitz, who lived in St. Louis at the time of the shooting, said writing the play allowed him to process the lack of indictment and that he hopes to invite others into the same reflection on current events through his work. Simowitz said the next step entails finding a theatrical home for “Djarum Vanilla” to launch the play into a full production.

“I was looking for an outlet to grapple with those events as a resident of St. Louis and a white American with privileged status – trying to work that out and figure out how best I could contribute, and this play really felt like the best way,” Simowitz said.

“Djarum Vanilla” is inspired by the years Simowitz spent studying criminal defense and working for the Office of the Federal Public Defenders, Eastern District of Missouri. He said the experience prodded him to examine his own experiences with privilege and his moral standings on the meanings of privilege and Black Lives Matter. Fueled by the turmoil of thoughts and emotions that arose from Michael Brown’s shooting, Simowitz said he wrote the play over the course of a single weekend.

After his writing session, Simowitz produced the lead protagonist, Malcolm, who is a 21-year-old African-American man on supervised release from prison. While working at a gas station, he befriends Bex, an impoverished white teenage girl. With a politically charged Ferguson as a background, Simowitz said the individuals navigate their relationship, their story constituting only a microcosm of the diversity of lifestyles that crossed his desk throughout his time working for the government.

The play tackles nebulous moral issues, from instances of racist speech and questions of privilege, to moments of sexual and racial violence and police brutality within the legal system, Simowitz said. Differing views of privilege produce heated conversations between Bex and Malcom. Meanwhile, the relentless invasions into the gas station by Bex’s racist father, the police, and a public defender serve as reminders of the flawed and racist nature of personal outlooks and legal procedures alike, he said. The odds are stacked against Malcolm, who Simowitz said runs a high risk of being arrested once again.

“Malcom was in big danger because when you get caught in the system, the police need very little to get you back into it,” Simowitz said, “And that’s the way in which the criminal justice system has been weaponized against specifically people of color.”

Justin Weaks, who played Malcolm, said the character’s wish to stay under the radar and reunite with his family was a familiar scenario to him. He resonated with Malcolm’s willpower to maintain a sense of optimism, he said. When Malcolm shares his personality and internal conflicts directly before an audience, it reduces the sense of distance by placing spectators in direct proximity to moments of vulnerability and violence alike, Weaks said.

“It’s heavy to inhabit but also liberating and freeing because feel like I got to give a voice to a lot of frustration that people of color deal with yet feel pressured to bottle up,” Weaks said. “You see the character trying to push down certain feelings and then unleashing some of that frustration, which people of color don’t often get to do, so it was nice for me to live in the truth.”

Jordana Fraider, Programs Director at the National New Play Network, said the scenes of violence and police brutality were difficult to watch because they illustrate realistic encounters happening today. Yet for the same reason, portraying the trauma was a necessary part of the play, she said.

“It’s hard to sit back and watch something like that and not want to jump in and intervene and say, ‘no, wait, stop, you don’t understand,’” Fraider said. “It’s triggering to watch this real story you know is happening in truth all over the country.”

Incessant cases of police brutality and ever-present racism adds weight to the already heavy responsibility of relaying such traumatic and truthful experiences, Weaks said. Even if spectators are already aware of the Black Lives Matter movement and police brutality, he said “Djarum Vanilla“ gives insight into the raw reality of how the aftermath of an arrest can affects an individual’s psyche.

“Showing those nuances is very important because people can walk away with a greater, more in-depth-level understanding of the problems we have in this country when it comes to police brutality and the criminal justice system,” Weaks said. “From there we can have a discussion about why a certain group of people experience this one thing and another group of people don’t and how to make things better.”

Hoping to jolt the audience into heightened awareness and sensitivity towards identity politics and the legal system, Simowitz said he channels realistic life experiences he has witnessed in contemporary America into his play. If he can prod the playgoers to consider and question their self-perception as well as their perception of others, Simowitz said he has fulfilled his purpose with the play.

“Playwriting is the way that I feel plugged into the world that is larger than me,” he said. “This is about me trying to understand the world around me, and the most important thing I can do is invite people into that process.”