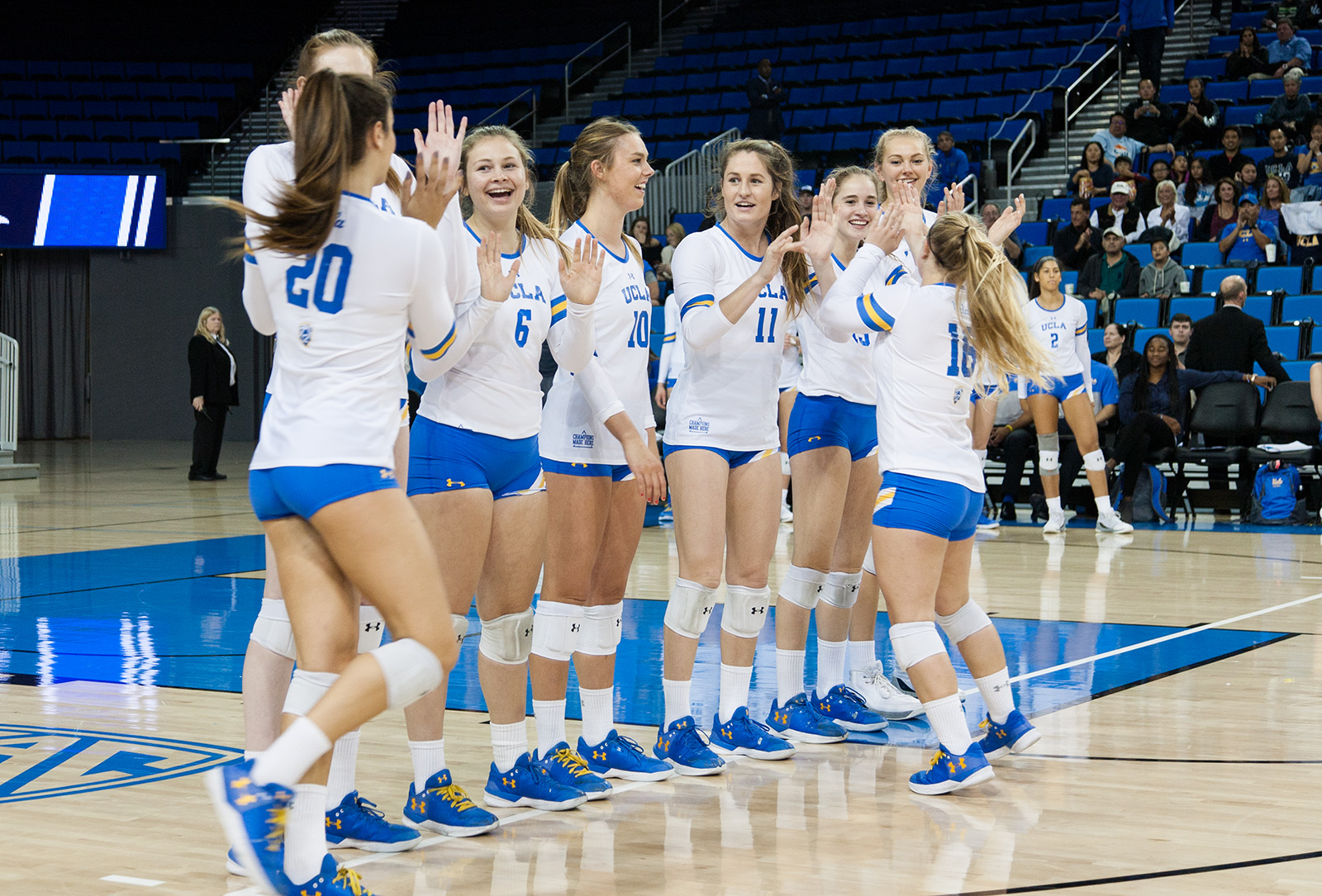 The Bruins are returning six starters from last season’s lineup and bringing in six new recruits for the 2018 season. UCLA women’s volleyball released its schedule for this year on June 18, and should have a strong showing this season. (Daily Bruin file photo)

This may be the year that the Bruins dominate.

UCLA women’s volleyball released its schedule on June 18 for the 2018 season and won’t have to face a familiar foe from last year ­– Nebraska.

UCLA faced the Cornhuskers – the 2017 national champions– twice in its first seven games last season, and was swept in both matches.

The Bruins will not face a top-15 opponent from last year in any non-conference matches, giving them an early leg up as they prepare to take on the Pac-12.

UCLA will open its new season with an exhibition match against UC Santa Barbara, a team the Bruins swept when they last met in 2015.

The season will officially start with UCLA’s annual tournament in Hawaii. The Bruins will take on Hawai’i – a team they haven’t lost to since 2013 – and some unfamiliar opponents in Kansas State and Gonzaga.

The Bruins have not seen the Wildcats since 2010. But after Kansas State finished with a 10-19 record last season and fell short of reaching the NCAA tournament, they shouldn’t bring much trouble for UCLA.

The Bruins have never faced the Bulldogs, but Gonzaga also failed to reach the postseason in 2017.

With a likely undefeated record to start the season, the Bruins will conclude non-conference play against Baylor, San Diego, Cal Poly and Long Beach State.

The Bruins took on the Bears in the 2016 NCAA tournament, defeating them 3-0.

The Toreros have been a regular opponent for the Bruins since 2015, and UCLA has not lost since 2016.

The Mustangs entered Pauley Pavilion for the second round of last year’s NCAA tournament after winning their first Big West title – but the Bruins sent them home, earning a 3-1 victory.

Just like last year, UCLA will face Long Beach State in its final match before Pac-12 play – and it will likely come out with another victory given Long Beach State’s 10-19 record in 2017.

UCLA will travel in its first four Pac-12 matchups, including trips to Utah and Stanford – two teams the Bruins couldn’t beat last season.

The Utes, however, lost a valuable senior in outside hitter Adora Anae, who finished the year ranked second in the Pac-12 with 547 total kills.

The Bruins will still have to face rising junior Kathryn Plummer on the Cardinal – the 2017 espnW and AVCA National Player of the Year. While taking her on is a challenge, UCLA is returning six starters from last year’s lineup, so the team is familiar with Plummer’s skill at the net.

UCLA will see Stanford twice in 2018, as well as Washington – who swept UCLA in their two meetings last season and finished the year ranked No. 8.

Oregon is also on the schedule twice, returning many of its top-ranked recruits from last year. But the Bruins proved with a 3-1 win last season that the Ducks are no match for them.

And then there’s USC.

The Bruins narrowly lost to the Trojans 2-3 once last year. However, following the conclusion of the season, USC fired its coach of 17 years, Mick Haley – so this year will certainly require some readjustments for UCLA’s crosstown rival.

Pac-12 play definitely won’t be easy, but only losing two starters in outside hitter Reily Buechler and setter Sarah Sponcil and bringing in six strong recruits gives UCLA a good chance to finish high in the conference rankings.

With a good conference run comes a potential NCAA run, and another opportunity for the Bruins to get close to reclaiming their 2011 national title.