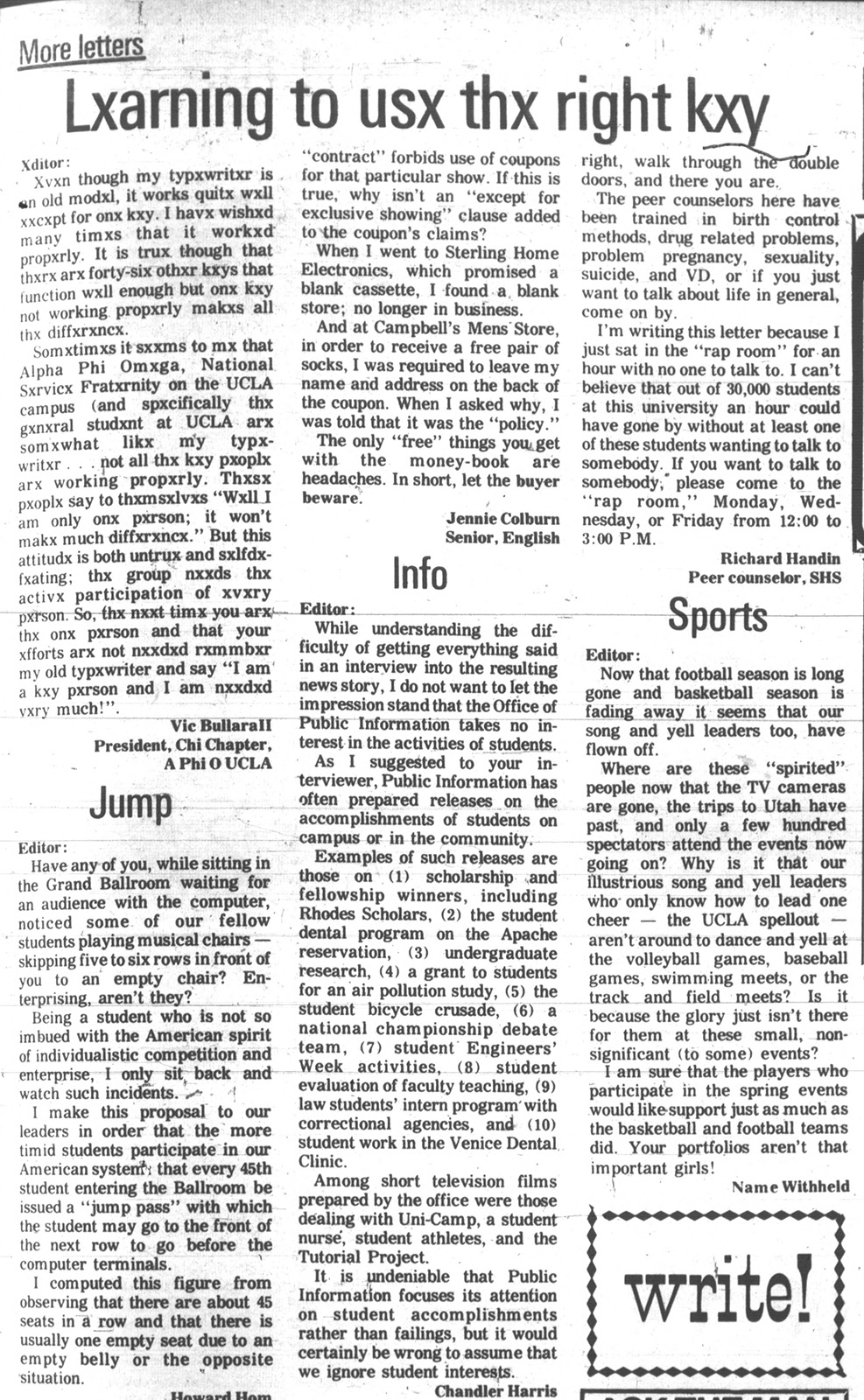 That was the message a student had for their fellow Bruins back in 1972.

The Daily Bruin Opinion section, like the Opinion departments of other publications, has a practice of running submissions and letters to the editor from the public. These pieces are either responses to stories published in The Bruin or fleshed-out arguments about matters that are relevant to the university.

Forty-six years ago, the president of the Chi Chapter of the Alpha Phi Omega co-ed service organization – then a fraternity – wrote a letter to The Bruin about his broken typewriter.

That one key was, of course, the letter “e” – the most-used letter of the English language.

But Bullarall had more to offer the student body than bizarre reading exercises. His letter mused about his realization that some members of the student body were like his dysfunctional key – not working properly with the rest of the campus community.

At a time when the Cold War was coming to a close and the United States was entering into some domestic happenings of its own, including the 1972 presidential elections, studentwide unity was certainly an apt message.

Except, of course, for the fact that Bullarall’s letter still featured the letter “e” – a closer look at his previous line will show you where.

Still, the April 19, 1972 letter had some merit, despite the ostensibly still-functioning “e” key on Bullarall’s typewriter.

It also seemed the Daily Bruin’s editors at the time didn’t catch the misspelling – looking past the fact that the entire letter was filled with misspellings – of the word “remember.”

Needless to say, the Bruin’s submission standards have changed over the years. Submissions undergo more thorough edits from the Opinion editor and sometimes even the Bruin’s managing editors, and are run when they present argumentative merit to the paper’s readership.

The student body has still been afforded some feel-good pieces from the community. Be it about student government leaders needing to come together after elections or the annual Valentine’s Day pieces about how love is more than a Disney movie trope, the Bruin has continued to run pieces from the public about coming together – or, at the very least, pieces that give readers a good laugh.

But the paper has been seeing a distinct lack of submissions from the public about dysfunctional keys. Maybe that’s because the age of typewriters is long gone.

Or maybe it’s because students no longer find it funny to act like their “e” key doesn’t work.