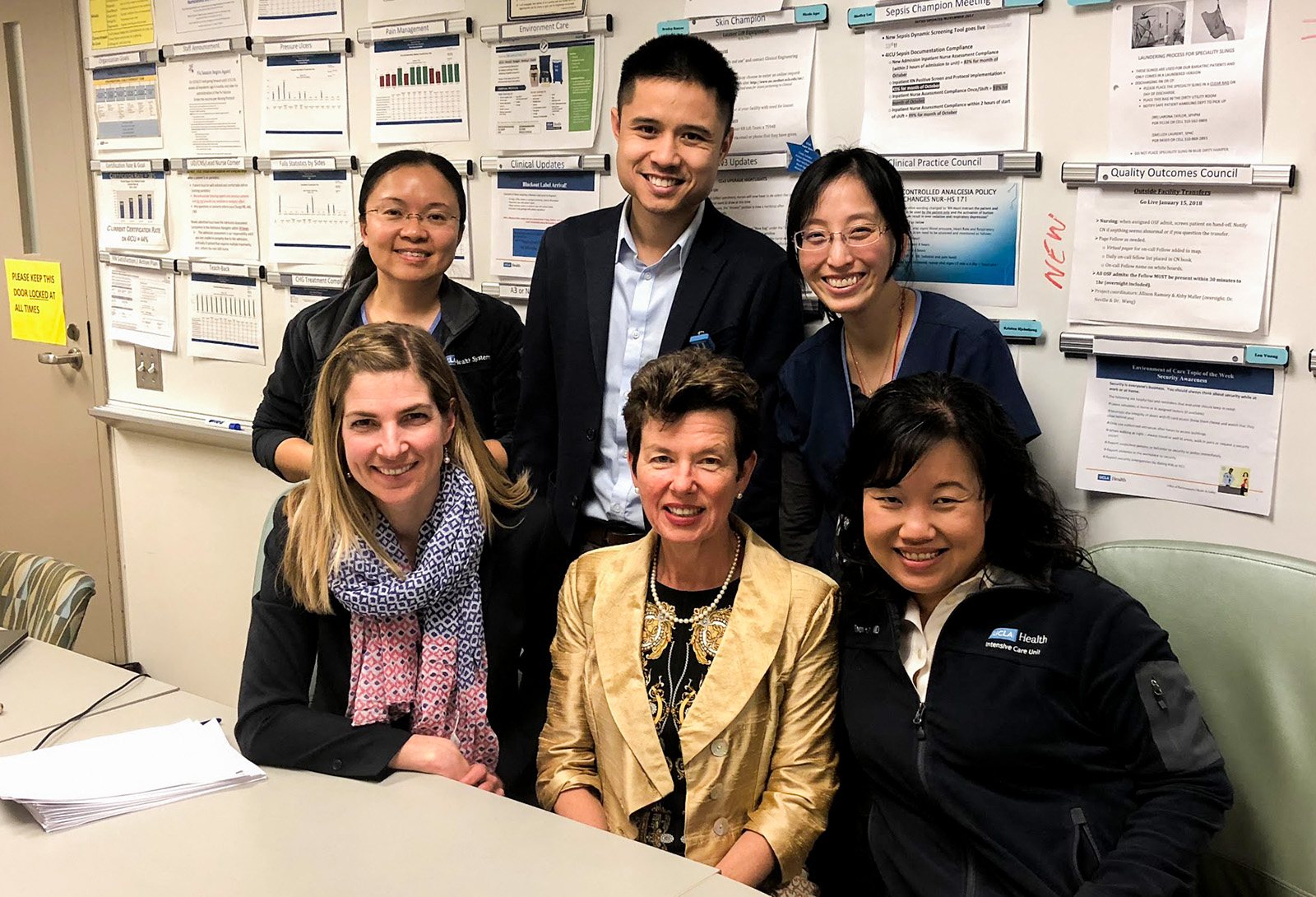 The 3 Wishes Project grants wishes to terminally ill patients in UCLA’s medical ICU as part of a multicenter research trial started in Canada in December 2017. (Courtesy of Thanh Neville)

Correction: The original version of this article misspelled Thanh Neville's name. It also incorrectly stated that the 3 Wishes Project provided financial assistance for Ambre Schaffer's grandmother to return home to Las Vegas. In fact, it helped arrange for her to return.

A patient in the Ronald Reagan UCLA Medical Center’s medical intensive care unit was able to watch the sunset on the hospital’s outdoor patio on his last day alive despite it being against traditional medical practices, thanks to a new medical program.

The 3 Wishes Project grants wishes to terminally ill patients in the hospital’s MICU as part of a multicenter research trial started in Canada in December. To participate in the study, patients must have less than a 5 percent chance of survival in the MICU and be receiving end-of-life treatment. The medical center is currently the only hospital in the United States to offer the 3 Wishes Project to MICU patients.

The program uses grants and donations from families of former patients and people who value the project to fund patients’ last requests, which are free for patients. Examples of wishes have included keychains with the patient’s thumbprint, mariachi music and even harpists coming to the hospital to play live for the patient and their family. Although the program averages three wishes per patient, there is no limit to the number of wishes a patient may receive.

Peter Phung, a palliative care physician at UCLA Health and one of the leaders of the 3 Wishes Program’s UCLA trial, said that granting wishes makes hospital rooms less devastating.

“It transforms the room from thinking about when the patient is going to die to celebrating their life,” he said.

Phung said the medical team at the 3 Wishes Project must learn more about the patient as an individual outside of the hospital in order to tailor the treatment to each patient and family.

“In a typical day, what was part of our initial treatment was to ask what brought them to the hospital and how we could treat the problem or disease,” he said. “With 3 Wishes, we get to ask who they were before they were hospitalized.”

While other programs such as the Make-A-Wish Foundation and the Dream Foundation work externally from hospitals and with patients from all over the country, the 3 Wishes Program is only available for Ronald Reagan UCLA Medical Center’s MICU patients. Many recipients are unconscious by the time they are granted wishes and some are only in the MICU for 24 hours or less before they pass.

Thanh Neville, a doctor of internal medicine at UCLA Health and the other founder of the UCLA Health chapter of the 3 Wishes Project, said she thinks the program uplifts not only the families but the medical teams as well.

“Working in the ICU is hard,” she said. “Patients are dying all of the time.”

Some nurses said granting the wishes was the highlight of their career.

Kristen Hjelmhaug, a nurse in the MICU, said before the 3 Wishes Program was implemented, treating terminally ill patients was a devastating experience because it felt as though nurses could not do anything to help the patient or console the family. Hjelmhaug said that nurses now feel better knowing that the patient’s physical and spiritual needs are fulfilled at the end of their life. One time a family was allowed to bring a patient’s dog into the hospital, she said.

“When the dog came in the room he immediately jumped onto the bed,” Hjelmhaug said. “It was really special.”

Ambre Schaffer, whose grandmother participated in the 3 Wishes Project, said the wishes allowed her to think about what a blessing her grandmother was instead of her loss.

“My grandmother raised me. She was my best friend and I will probably never have a relationship like that again,” Schaffer said. “I don’t think that I would have been able to heal as fast without the 3 Wishes Project because it changed the entire end of her life.”

Anita Amos, the daughter of a 3 Wishes Project recipient, said that she felt the process took care not only of the patient but also the family. Amos added that the medical team embraced her and became an integral part of the family.

“Looking back on my mother’s illness, I was always waiting for her to heal,” Amos said. “It put me in a place where I could surrender.”

Neville said that while the wishes go to the patient and their families, the 3 Wishes Program benefits everyone caring for the patient.

“This process of honoring who the patient is is just really valuable to everyone involved – the patient, the family and the entire medical team,” she said.