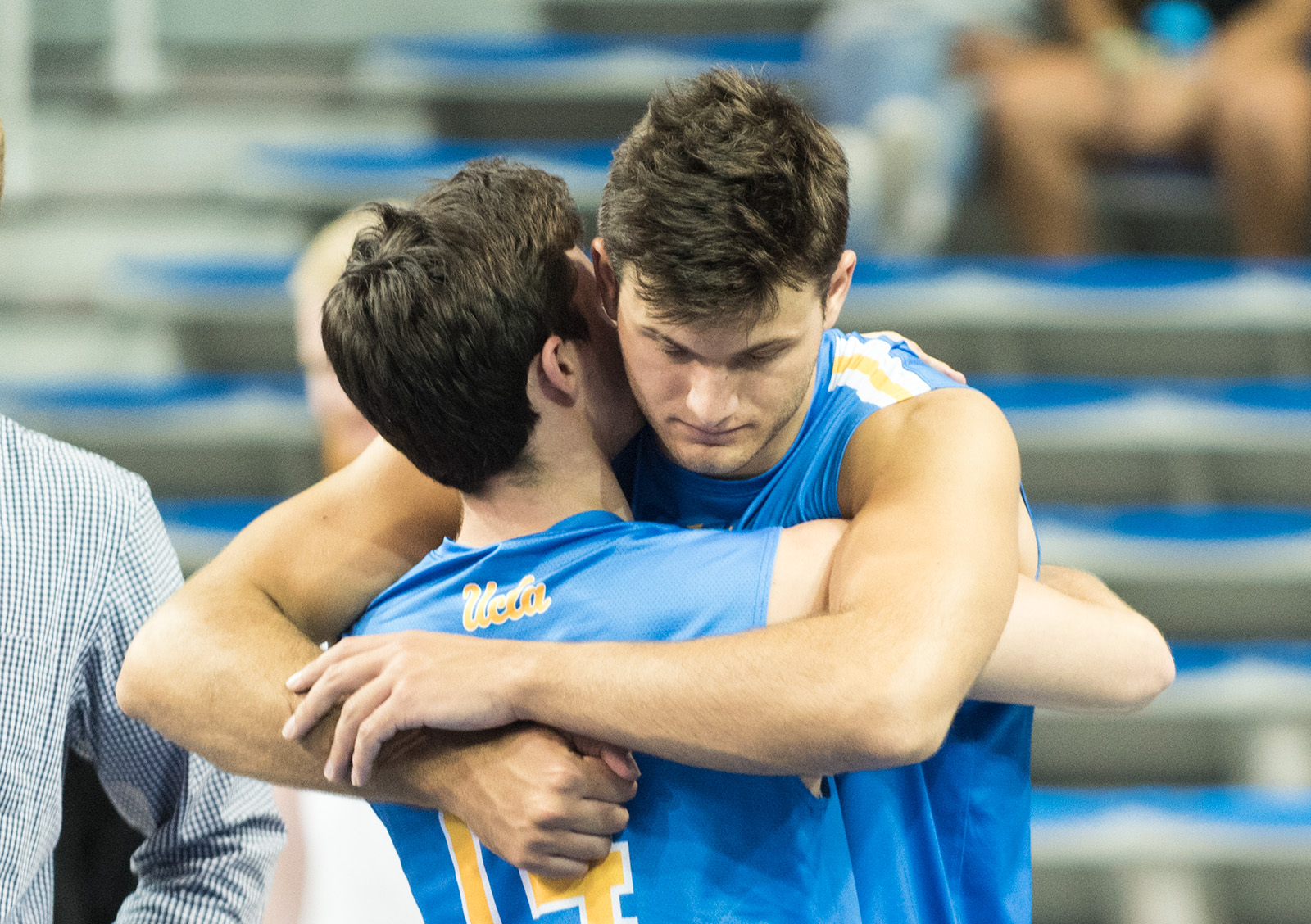 No. 3 seed UCLA men’s volleyball fell in five sets to No. 1 seed Long Beach State in the NCAA championship Saturday. This was the third time this season that the 49ers took down the Bruins. (Isabelle Roy/Daily Bruin senior staff)

UCLA men’s volleyball was 5 points away from its 116th school championship in the fourth set, but then missed four consecutive serves and allowed Long Beach State to force a decisive fifth set.

Coach John Speraw said the team needed the service pressure to have a chance at the victory.

“In the fourth set, I feel like we were doing exactly what we needed to do all the way through there,” Speraw said. “I wanted to go out there and bomb (serves); that was the only way we were going to win. We had a run at the end of that fourth set when we had all of our best servers go back and error, and I think it was a lot about fatigue.”

This was the 49ers’ first time claiming the national title since 1991 and their second title in program history. The championship drought continues for the Bruins, who have not won the title since 2006.

Junior setter Micah Ma’a said his decision to continue setting to Gyimah instead of distributing the ball elsewhere was based on his current run of form.

“It was pretty obvious that everyone in the gym knew where I was going and we’ve been okay with that all year,” Ma’a said. “He’s one of the sole reasons we are even here in the first place. … He went up against double blocks, triple blocks, and I don’t know what he hit on the day, but he still hit at a really high clip.”

49er scoring leaders, outside hitters Ensing and TJ DeFalco, finished the championship match with a combined 38 kills and hitting percentages of .326 and .419, respectively.

With the score tied at 17-17 in the third set, the Bruins scored 5 straight points past the 49ers, their longest scoring run of the match. Junior outside hitter Dylan Missry put two service aces past the Long Beach State back row. Missry would finish the match with a career-best six aces.

UCLA won the third set 25-20, hitting for .208 as a team while holding Long Beach State to .091 attacking. The 49ers’ side-out percentage dropped to 43 percent in the set, as the Bruins had four service aces.

The Bruins had eight blocks to the 49ers’ three through three sets and finished the match with nine. UCLA also out-dug Long Beach State over the course of the match, with 41 digs to 35.

Entering a potentially matchwinning fourth set, UCLA took an 11-9 lead in the first 20 points scored. The 49ers came back to take the fourth set 26-24 after the Bruins failed to stay consistent from the service line.

The 49ers held an 8-7 lead at the halfway point of the deciding fifth set. UCLA missed another four serves and Long Beach State extended their lead to 14-10. 49er middle blocker Nick Amado clinched the title at 15-12 with a kill through the middle of the Bruins’ front three.

Gyimah and junior setter Micah Ma’a were named to the All-Tournament Team. Long Beach setter Josh Tuaniga was named Most Outstanding Player of the NCAA tournament.

UCLA will lose four starters that were graduating seniors this year: opposite Christian Hessenauer, middle blocker Oliver Martin, libero JT Hatch and outside hitter Jake Arnitz. Missry said the Bruins will suffer because of their absence, but will need to get others acclimated to starting.

“I mean, it’s going to be tough losing all the seniors. I think it’s going to take a lot of work in the offseason and being on guys to really try and play as much volleyball as possible because there is a large discrepancy being play in practice and play in the game,” Missry said. “I think we can get some guys on the court, and win some games, and once you make playoffs you really never know what is going to happen, as we proved this year.”

The Bruins are now 11-2 all-time in championship matches played at Pauley Pavilion, and 19-7 overall.