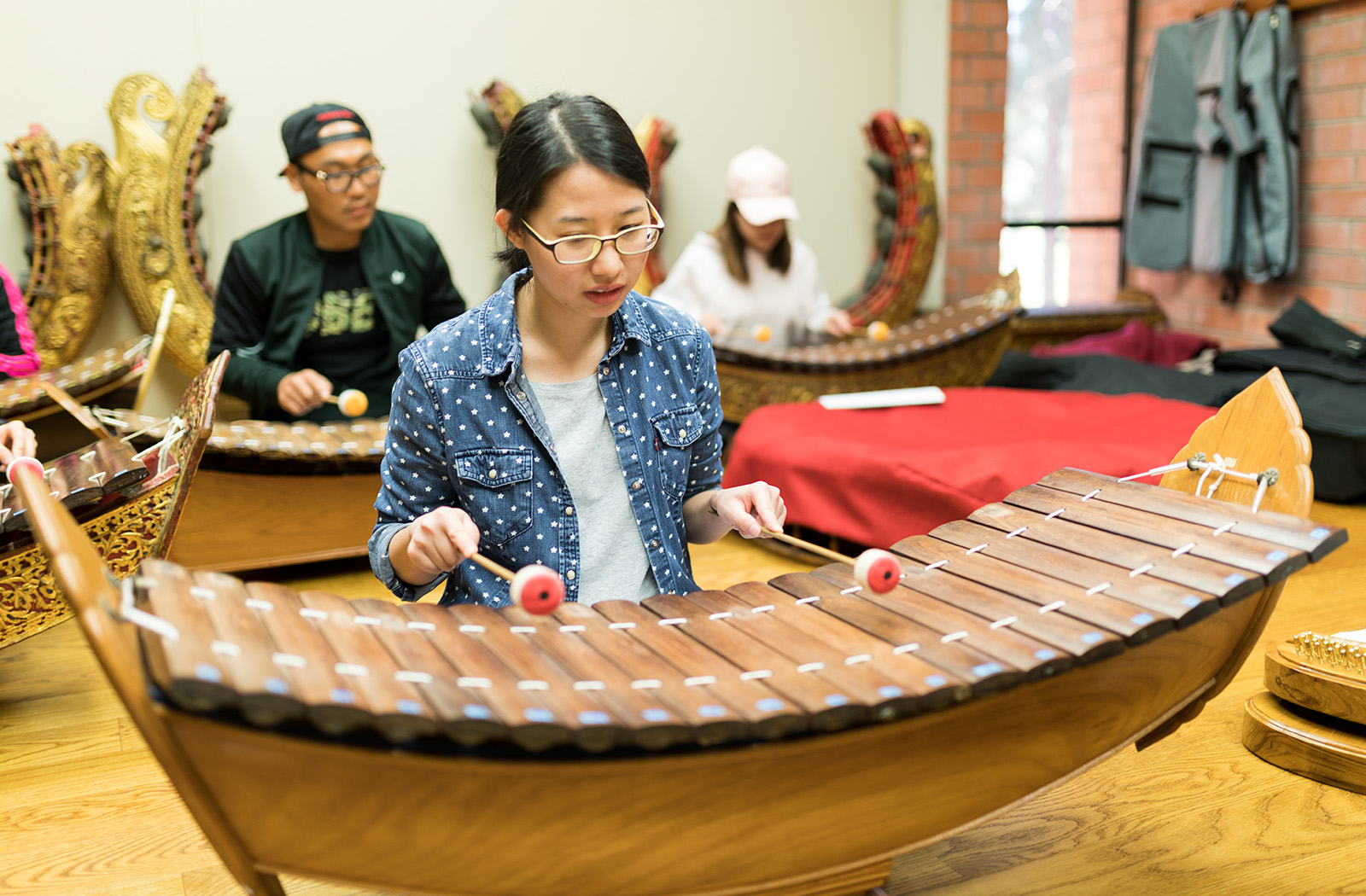 UCLA’s Music of Thailand Ensemble was founded in 1964, but went on hiatus since 1985. The ensemble opened again in 2016, and is open to all students and faculty. (Chengcheng Zhang/Daily Bruin)

David Morton, a former professor at UCLA’s department of music, originally founded the ensemble in 1964 using instruments he personally acquired from Thailand. However, after Morton’s retirement in 1985, the ensemble went on hiatus indefinitely until Adler joined UCLA in 2016 as the ensemble’s director. The ensemble, which is now open to all UCLA students and faculty regardless of music experience, aims to mirror the traditional structure of Thai classical mahori music, Adler said.

“The most important thing for me is to teach (students) Thai music exists not only in this classroom, but (also) right next to us,” Adler said. “We live in California, a state with an abundance of Asian communities, and I try to tell my students that there is a community (that) appreciates what we are doing in the class.”

In 2013, ethnomusicology professor Helen Rees became the faculty director of the world musical instrument collection and appointed Adler to restore the Thai instrument collection that Morton had left at UCLA. Rees sat through much of the process alongside Adler. They tuned and cleaned the instruments together in Schoenberg Hall, and Rees later joined the Music of Thailand Ensemble as a student.

“I got so interested watching her … I joined because I was insatiably curious about what (the instruments) were like to play and what they sounded like,” Rees said.

Despite its recent revival, the ensemble currently has 36 students, and is gradually growing each year, Adler said. The class is also divided into beginner and advanced sections: For beginners, Adler expects her students to learn about eight bars of music per three-hour class.

“I want to dispel the misconception that you have to have a background in music to learn music,” Adler said. “The process of learning should never be too serious.”

The ensemble specifically focuses on mahori, a type of Thai classical music that includes percussion, strings and vocals, Adler said. Classical Thai music derives its lyrics from royal literature, because the music was traditionally performed in royal Thai courts. Other lyrics come from folk stories; Adler said the stories metaphorically refer to love and sadness, while others glorify kings and higher powers.

The music is played in unison, but with a different level of ornamentation on the dominating melody, played by the khong wong yai, a circular frame with small gongs arranged according to pitch, Rees said. The two xylophonelike instruments – the ranat ek and ranat thum – are defined by their respective high and low pitches, Adler said. The other musical instruments, such as the strings, join in as different roles.

Adler sees the different instruments working together as a family.

“If the (khong wong yai) is a parental figure who provides, then you have the ranat ek in the role of eldest son dominating the ensemble,” Adler said. “The string instruments enter as sisters shimmering around the main melody, and the ranat thum plays the role of joker.”

The ensemble has given students the opportunity to explore musical practices outside of American culture, said Xiaorong Yuan, a graduate student in ethnomusicology. As an international student from China, she said people questioned her about why she chose to focus on Thai music, which sparked conversations about the similarities Yuan saw between Thai and Chinese music.

“Before I played in a Thai ensemble, I was unfamiliar with Thai music and was only able to view it as a beginner,” said Yuan. “But I found when you practice long enough, you begin to find fun in the music and are able to cooperate with other instruments like friendships.”

Rees said Thai music has reoriented the way she thinks about rhythm and phrasing, and has greatly enriched her ability to teach others about Thai music in her own classes. The ultimate goal of the ensemble is to bring different types of music from around the world to UCLA, so students can learn about the philosophies that inform the cultural background and the context in which the music is played, Adler said.

“I like to think that … I am nurturing a seed that will eventually sprout into a tree,” Adler said. “For me, the musical ensemble represents that tree, which provides a musical canopy (under which) people come to rest … and simply enjoy being together.”