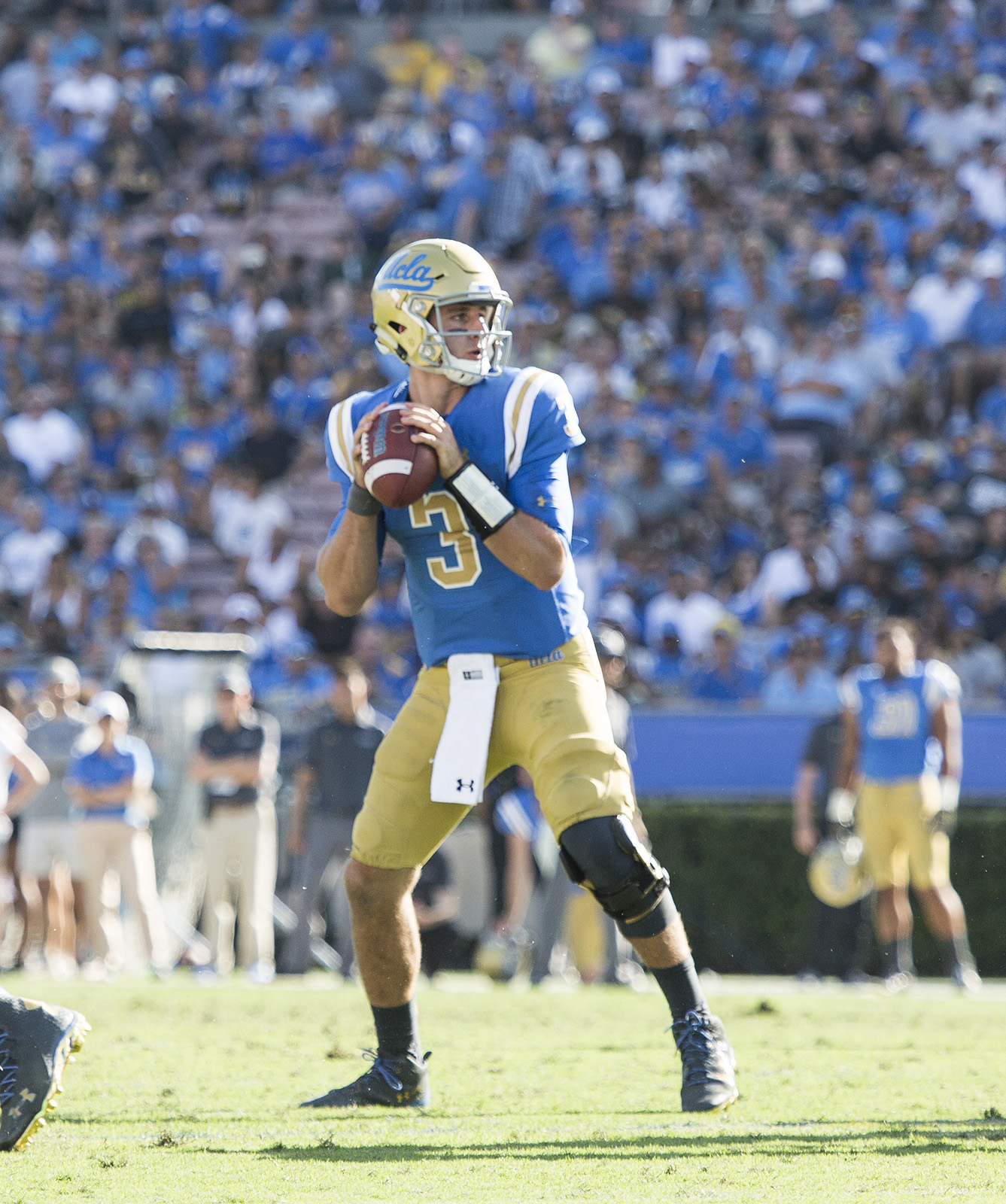 Former UCLA quarterback Josh Rosen is a projected top-10 pick in Thursday’s NFL Draft. Rosen threw for over 9,000 yards and had a QBR of 140.1 in three seasons with the Bruins. (Amy Dixon/Assistant Photo editor)

Analysts are saying Josh Rosen won’t be the first quarterback off the board in the NFL Draft on Thursday night – in fact, he may not even be the second or the third.

However, that’s the teams’ mistake to make.

Rosen is the best quarterback in this year’s draft class and has the track record to prove it. He endured three years of mediocre coaching and personnel, learned a new playbook in each of his three college seasons and still managed to put up numbers comparable to the other top quarterback prospects.

Rosen and USC’s former quarterback Sam Darnold each threw 26 touchdowns in 2017, but the Bruin did so in three fewer games. Rosen’s QBR of 147.0 also came in just behind Darnold’s 148.1.

Oklahoma’s Baker Mayfield won the Heisman Trophy in 2017, but is the least NFL-ready prospect of the four. Despite throwing 43 touchdowns and just six interceptions in the 2017 season, Mayfield is undersized by NFL standards, making him a risky pick for a team searching for a franchise quarterback.

Some teams remain concerned about Rosen’s character and personality, but his outspoken tendencies never had anything to do with the team he was playing for. He never put his teammates, coaches or school on blast – directly or through the media.

He even forgave his former coach, Jim Mora, for going on record in recent weeks and saying Darnold would be a better fit for the Cleveland Browns at No. 1.

So where would Rosen fit?

There are a handful of teams in the top 10 of this year’s draft that are in the market for a quarterback, including the New York Giants and Denver Broncos. Rosen would be better off with one of those two teams if the draft order holds because they already have veteran quarterbacks on their roster for the immediate future.

Rosen could learn the offense for a year or two before being plugged into a starting role, putting him in a better position to succeed right away.

This path has worked wonders in the past for guys such as Aaron Rodgers and Jimmy Garoppolo, who were both selected by teams with aging quarterbacks on the roster.

Rodgers was selected 24th overall by Green Bay in 2005 and sat behind Hall of Famer Brett Favre for multiple seasons before seeing the field. Garoppolo was selected 62nd overall by New England in 2014, and spent more than three years learning the position from Tom Brady before being shipped to San Francisco at the end of last season.

Rosen will be fine no matter where he lands; he just needs time to study the game and get comfortable. However, his leash will be shorter depending on the team that selects him.

The New York Jets own the third pick, and Rosen will more than likely still be on the board when they are on the clock. The Jets don’t have a starting quarterback under contract for more than one year, which indicates they are in the market for a long-term option at the position.

If Rosen is drafted by the Jets, he will be in an immediate quarterback competition and have the chance at starting week one.

However, being thrown into the fire by a team in a large market with high expectations year in and year out could be damaging to Rosen’s development.

Los Angeles Rams quarterback Jared Goff is a good example of a smart, talented player who overcame this type of situation, but he had to endure a disastrous first year to do so.

The Rams went 4-12 in Goff’s rookie season – 0-7 in his starts – and he lost the starting job in preseason camp, but underwent a coaching change after a disappointing inaugural season in Los Angeles. In year two, Goff and the Rams won the NFC West with an 11-5 record.

I think Elway sees a lot of himself in Rosen and would not pass up the opportunity to take him with the fifth pick, should he be available. Elway was outspoken and controversial coming out of Stanford, but had a long Hall of Fame career when it was all said and done.

If the Broncos decide to pass on Rosen, expect teams outside of the top-10 to engage in a bidding war for his services.