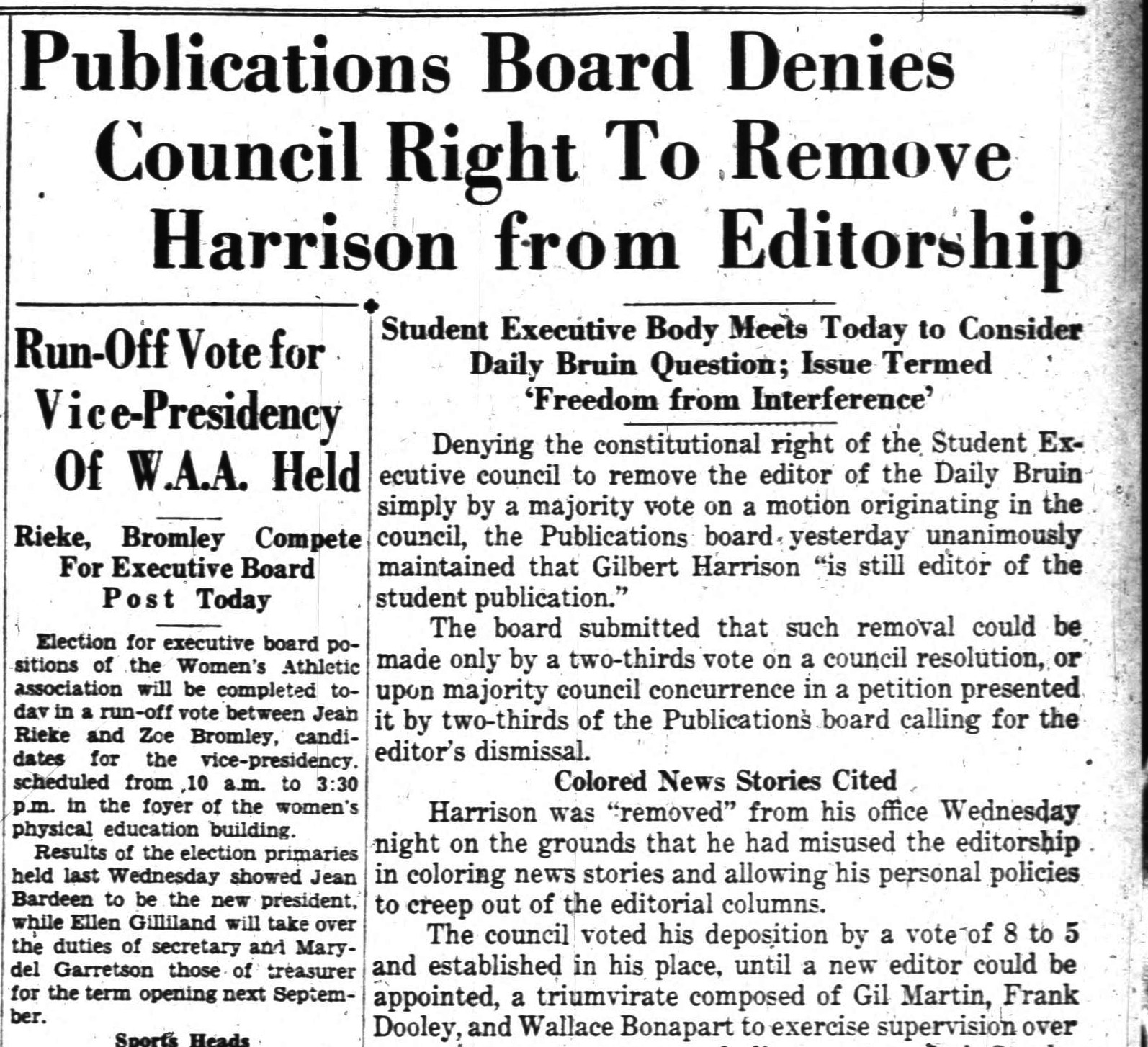 It’s easy to take for granted the Daily Bruin’s independence as a campus news source. But state-run media was partially a reality at UCLA.

More than eight decades ago, student government had significant control over the employment of the Daily Bruin’s editor in chief. In March 1936, during the tenure of Editor-in-Chief Gilbert Harrison, it wielded this power to significant effect.

The editorial called for the end of various student boards and the student government presidency. The purpose?

“It would eventually get rid of students who came to the university only to run for offices, and it might eventually substitute for the concept of shallow political advancement now in vogue, a concept of genuine intellectual achievement,” said the editorial.

When put that way, a modern-day purge of student government seems tantalizing as well.

The Student Executive Council – the 1930s iteration of the Undergraduate Students Association Council – led by then-President Thomas Lambert, wasn’t happy with Harrison’s leadership of the paper. The Bruin reported on March 26, 1936, a Thursday, that the council voted the previous day, via the classic student government tactic of a secret ballot, to remove him as editor in chief. The story was almost invisible on the front page, tucked away into the leftmost column.

Council members spent a majority of the meeting discussing whether The Bruin’s presentation of news was biased. Harrison objected that he had exclusive control over how the Bruin presented it news. The board took a stand that while Harrison could use the editorial space as he wished, the paper had to report the news in an unbiased manner. According to council documents, other objections raised included that he restricted the contents of students’ submissions to the paper and he used the news sections to further his own views.

By a vote of 8-to-5, council members deposed Harrison and set up a temporary committee to fill in his role.

But it was far from smooth sailing there on out. On March 27, 1936, The Bruin reported that the council’s temporary committee had already started making editorial decisions at The Bruin, creating tension in the office. The committee members appeared at the office immediately after the council’s vote on Wednesday to demand an overhaul of the editorial page, in order to print an editorial written by two council members on Harrison’s removal.

From experience, I can tell you that a fair number of Daily Bruin staffers would be unhappy if the Opinion page had to be remade during the night, considering the amount of time it would take to copy edit, fact-check and place a new article in the layout.

Unfortunately for the council’s henchmen, the editorial page had already gone to the printers. They then decided they would instead write their own news story, to go up in the next day’s paper. But Harrison had also written up a piece on his side of the story and wanted it go up without any edits – something the henchmen opposed.

Ultimately, then-Managing Editor Jack Stanley chose to write up The Bruin’s side of the story and print it on the front page.

Early in the morning on Thursday, the day after the council meeting, the Bruin’s staff gathered in the office. Upset staffers considered going on a strike, with their demands that Harrison be reinstated as editor in chief and the student government stop interfering with the paper.

The committee then considered the possibility of publishing the newspaper without any contribution from The Bruin’s staffers. However, it eventually made an agreement with Stanley that he would retain full control of the paper as long as he published both sides of the Harrison controversy.

At 1 p.m. on Thursday, more than 100 Bruin staffers met formally to discuss what had happened. After interviewing a student government member, the staff took two separate votes on whether to walk out, firstly, over its failure to obtain full control of The Bruin, and secondly, to reinstate Harrison. The staff voted in favor of a walkout in both instances.

Later that day, the Publications Board that oversaw the Daily Bruin met and denied the student council the right to remove Harrison. It maintained that Harrison was still editor in chief of The Bruin and that such a removal could only happen following a two-thirds vote by the council. Following this development, the council’s temporary committee members were absent from the office later that night.

The whole incident soon blew over. On Monday, March 30, 1936, The Bruin reported that the council unanimously reversed its decision to oust Harrison. At an executive session on Friday, the men’s athletic board chairman Gil Martin questioned Harrison on journalism ethics and asked him if he would print both sides of the story. Harrison obviously answered in the affirmative.

The council came to a consensus that the editor in chief should run The Bruin as he sees fit and consequently reversed its Wednesday motion. It also disbanded the temporary committee that had attempted to control The Bruin’s articles.

Eighty-two years later, the undergraduate student government no longer controls the hiring and firing of the Daily Bruin editor in chief. Instead, the Communications Board, the modern version of the Publications Board, controls this.

And most importantly, the modern Bruin’s editorials are thankfully less quirky.