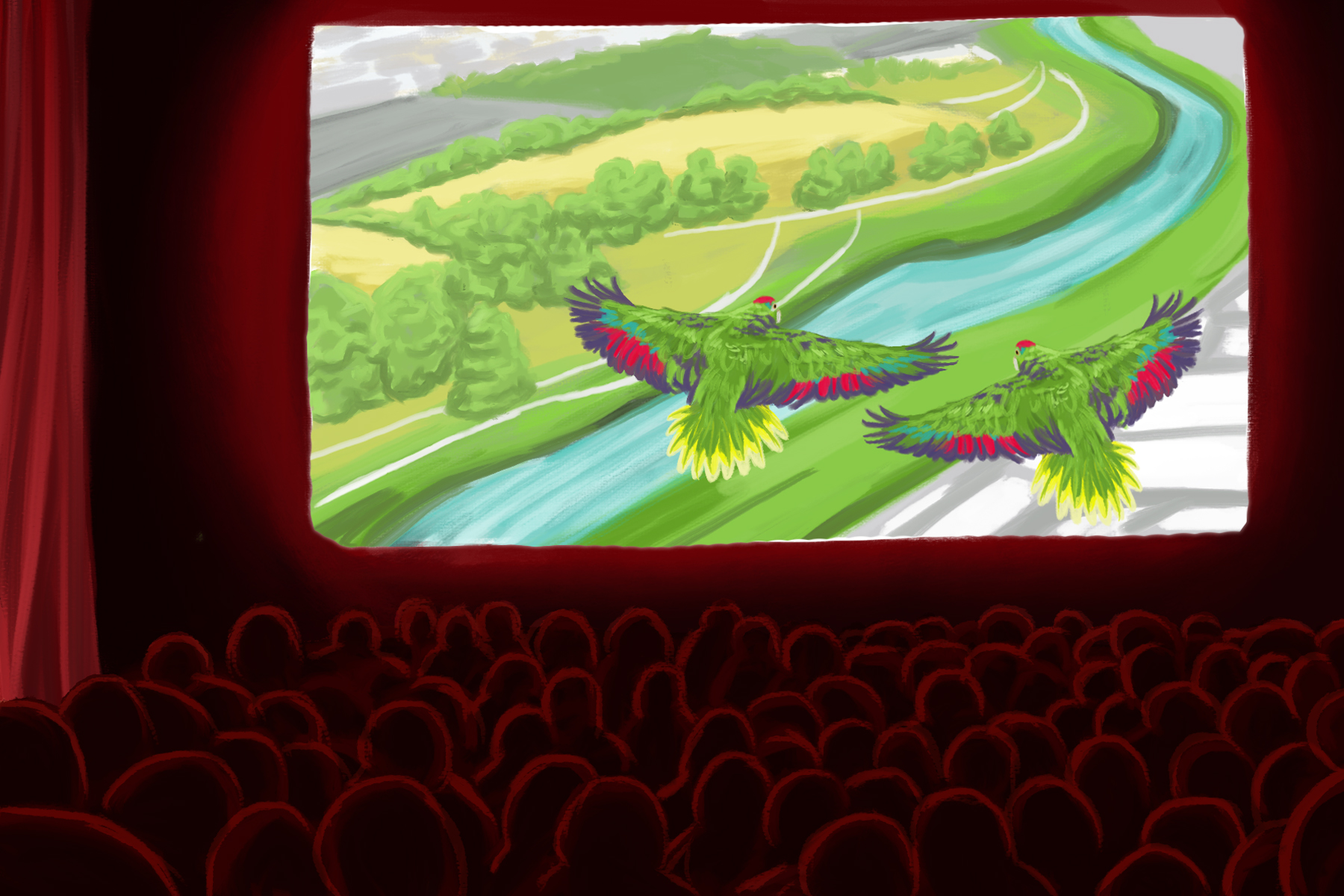 Citizens of Pasadena, California, may be familiar with the parrots constantly squawking in and around the city, but few know about their native Mexican origins.

The red-crowned parrots, first brought to Los Angeles through the exotic pet trade in the 1970s and 1980s, are the primary focus of “Urban Ark Los Angeles,” one of two environmental documentary shorts produced by the Laboratory for Environmental Narrative Strategies at the Institute of the Environment and Sustainability. The shorts, which will be displayed at the 2018 Earth Focus Environmental Film Festival on Saturday at Laemmle’s Monica Film Center in Santa Monica, are the products of a yearlong collaboration with the public television station KCET, which is in Burbank. Both short films focus on local environmental issues and prompt Angelenos to consider how the environment fits into their own understandings of the city, said Jon Christensen, an adjunct assistant professor and co-founder of LENS. The film medium brings a more artistic element to environmental narratives than scholarly articles or essays do, he said.

“If understanding and solving our environmental and sustainability challenges were just a matter of science and engineering, we’d have many of those challenges solved already,” Christensen said. “Stories are so important: They’re how we situate ourselves in the world.”

The festival will also feature “Taylor Yard: A Change of Heart in Los Angeles,” the first film released by KCET and LENS in February, which depicts a contaminated railroad yard on the Los Angeles River that is slated to become a new public park. Since the Taylor Yard story has not yet concluded, Christensen said the documentary examines both the history of the yard’s contamination, as well as how the community can help shape the revitalization of a piece of the Los Angeles River through public involvement.

While “Taylor Yard” stems in part from Christensen’s own research on the relationship between disadvantaged communities in California and access to nature, the concept for “Urban Ark Los Angeles” came from the research of Ursula Heise, a professor of English and co-founder of LENS. “Urban Ark” presents a potentially controversial argument, as it questions whether introducing nonnative endangered species into urban areas could be a method of species conservation, Heise said. The feral red-crowned parrots in Pasadena, which are endangered in their Mexican homeland, present an accidental case of a nonnative species thriving in an urban environment, she said. The example of the parrots could become a model for rethinking urban biodiversity conservation with nonnative species in mind, she said.

“We’re hoping (the film) will generate a lot of conversation about … what wildlife we want and what wildlife can thrive in these urban, human-shaped ecosystems,” Heise said.

Heise said the film format brings her research to a completely different audience than her scholarly articles or essays normally reach. Adding the visual element to the argument allowed LENS to effectively show the sheer number of the parrots in Pasadena, which helps demonstrate the population is big enough to play a role in the overall fate of the species, she said.

“Urban Ark” benefits from the documentary format by incorporating public opinion into the argument to achieve an understanding of how citizens relate to the nature surrounding them, Heise said. One resident commented on camera that she loves the birds because they remind her of growing up on a ranch with parrots around. Another noted that she mostly dislikes the parrots, as they force her to wash her car twice a week. Heise said the compelling personal narratives would not have been highlighted if she had simply written a scholarly article about the parrots.

Stefan Wanigatunga, an MFA student in directing and a filmmaker on both shorts, said the documentaries demonstrate how the natural environment affects local communities – a message that can lead to future public discourse.

The films allow audiences to visually connect with the communities shown, said Kristy Guevara-Flanagan, an assistant professor in the UCLA School of Theater, Film and Television. Guevara-Flanagan is not officially attached to LENS, but partnered with the laboratory to produce the documentary films. She helped translate Christensen’s and Heise’s research into visually moving pieces that audiences can engage with on a personal, human level, she said.

The visual contrast between the barrenness of Taylor Yard and its proximity to the urban environment and the river, for instance, communicates the land’s geography and allows audiences to wrap their head around it, Guevara-Flanagan said. Meanwhile, in “Urban Ark,” shots of the red-crowned parrots atop telephone wires and street signs visually demonstrates how the birds have adapted to urban structures.

“Film brings an immediacy to people in a way that the written word doesn’t, and certainly the way that statistics or facts do not,” Guevara-Flanagan said. “It makes it come alive, it makes it human, it makes it relatable.”