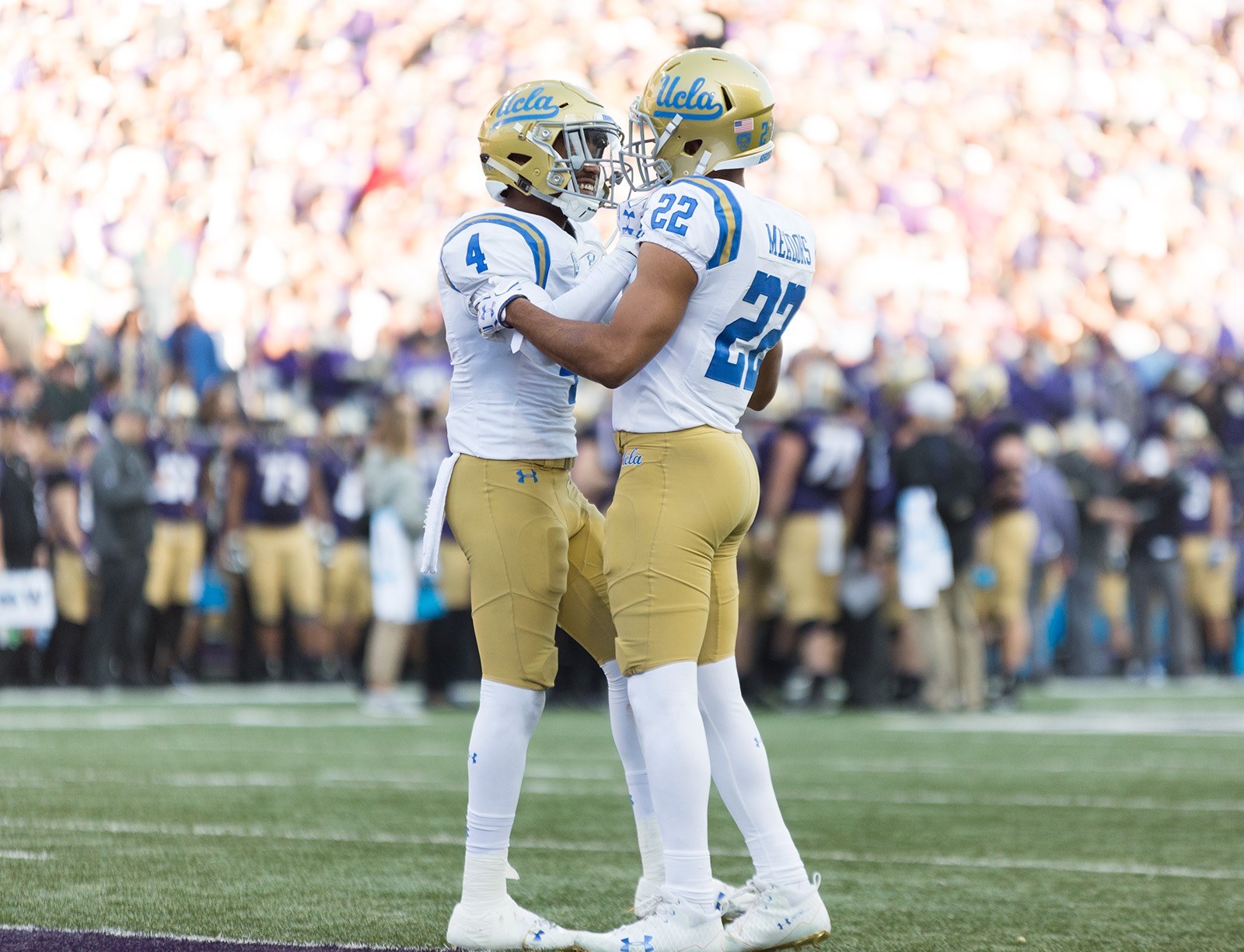 The graduation of former UCLA football cornerback Jaleel Wadood has left a vacant starting job in the secondary. Rising sophomore Quentin Lake, son of former Bruin, Carnell Lake, is one of the early candidates to fill in at the position. (Kristie-Valerie Hoang/Assistant Photo editor)

The safety coined the Bruins’ “Fours Up” slogan, and on game days, he struck a pose or celebrated after each pass he broke up and nearly all of his tackles, regardless of field position or score.

But Wadood exhausted his college eligibility and is now preparing for the NFL Draft. He’s the only starting defensive back from last season who won’t play for coach Chip Kelly in the fall, leaving a position up for grabs.

A little more than two weeks before UCLA’s spring football game, rising sophomore Quentin Lake has begun to emerge as a favorite to succeed Wadood.

“Right now they have me at strong safety, so that’s kind of the main role I’m playing,” Lake said, adding that he’s gotten reps at nickel corner as well. “Being a young guy coming up in that position, you can kind of get nervous, but I felt like I was confident enough from years past and I had the experience.”

Fortunately, Lake has a close role model with the knowledge and experience of someone who’s been in the same shoes. His father, Carnell Lake, was an All-American outside linebacker for the Bruins and was inducted into the UCLA Athletics Hall of Fame in 2000.

The elder Lake’s advice for his son?

“Be the most hard-working, physical player on the field,” Quentin Lake said. “That comes with doing extra stuff outside of practice, before practice, paying attention in the film room.”

That preparation could come in handy as several players compete for playing time in a crowded secondary with three returning starters.

Rising sophomore Mo Osling III is a backup on the depth chart, but is aiming to become a jack-of-all-trades for the defense.

“The coaches just want to see where I’m best at,” Osling said. “I’ve just been learning every position: corner, safety, nickel, … linebacker, in case I need to go anywhere.”

Injuries could also increase the availability of playing time.

Rising redshirt junior defensive back Colin Samuel, who started three games and had four passes defended last season, hasn’t practiced yet this spring. Rising redshirt sophomore defensive back Keyon Riley also donned the yellow practice jersey distributed to injured players, but he has been able to take part in some team drills.

Rising senior Octavius Spencer and rising redshirt junior Will Lockett also returned to the defensive backs after not practicing with the team prior to spring break.