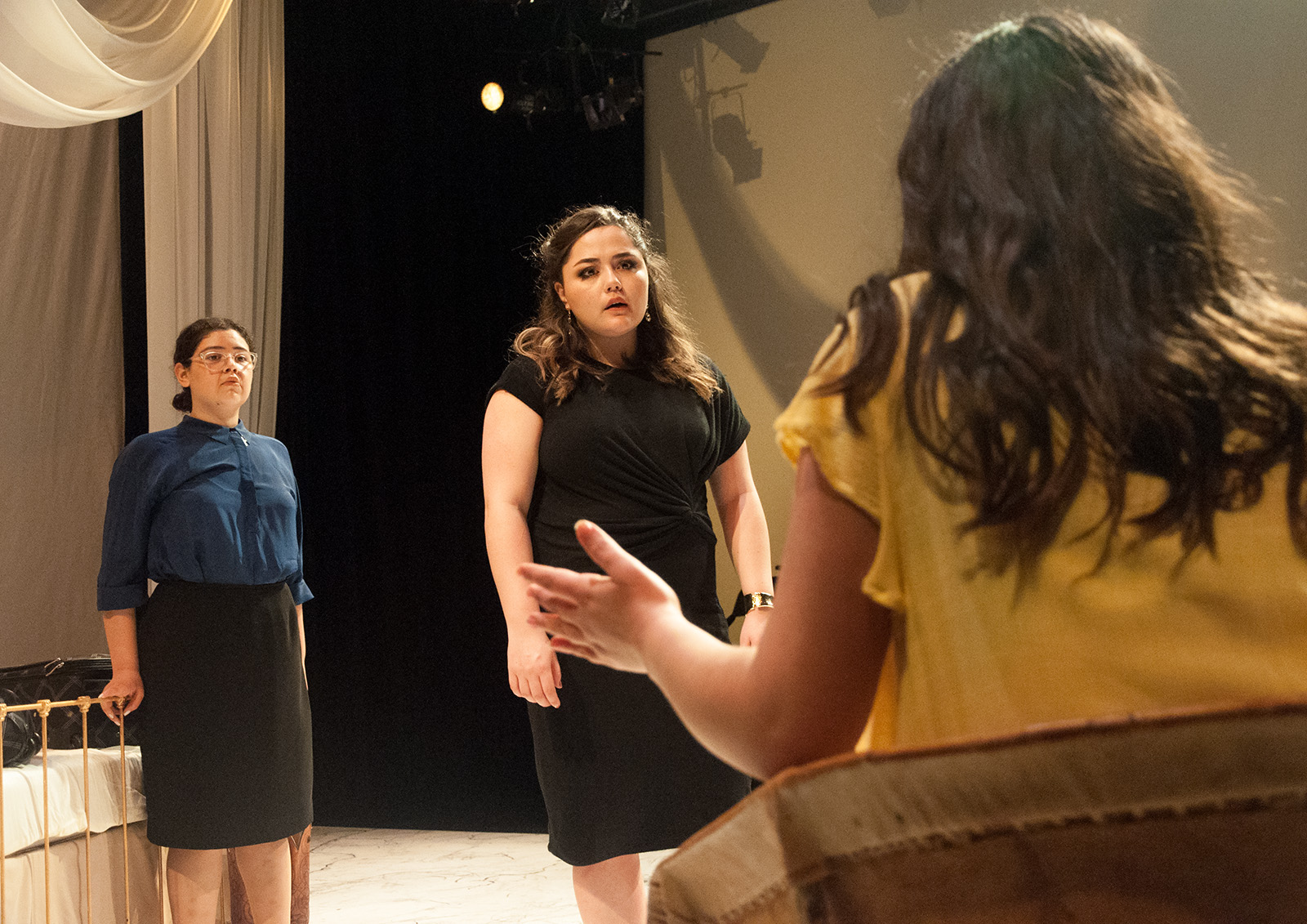 A single onstage bed becomes the center of multiple different settings through the use of lighting effects in UCLA’s rendition of “Mala Hierba.”

The play, which features an all-Latinx cast and focuses on Latin American culture, opens Thursday at Macgowan Hall. It uses visual and auditory design elements, including props and lighting, to further explore the characters and cultural themes of the play, said Sylvia Blush, a graduate student in fine arts and the show’s director. “Mala Hierba,” written by Tanya Saracho in 2014, follows the story of Liliana, a woman married to a magnate who deals drugs on the border of southern Texas and Mexico. Liliana struggles to provide for her family and must decide whether or not to leave her abusive husband for Maritza, the woman she loves.

Despite its complexity, the play uses only one set: the master bedroom of Liliana and her husband Alberto that is transformed through various lighting adjustments. For example, in one scene, the couple’s bedroom turns into a motel room by the manipulation of the lights’ intensities and the addition of saturated colors to make the expensive-looking bedroom appear as a cheap, dimly lit space, said Cynthia Ayala, a fourth-year theater student and the lighting director of the play.

The motel room scene is also essential to the love story between Liliana and Maritza, so she uses a saturated blue and pink to highlight the romance between them, Ayala said. She added she uses the pink to represent love and the blue to create a calming effect. The resulting purple in areas makes the scene more sensual than the brightly lit bedroom scenes.

“You can instantly see a change in tone,” Ayala said. “You can change the audience’s perception of what they’re seeing by the use of color and intensity.”

Sara Silva, a third-year theater student who plays Maritza, said the background of the set helps reflect Liliana’s experiences in her marriage. For the majority of the play, white curtains back the stage to symbolize the harmonious and put-together outward appearance of Liliana and Alberto’s relationship. But eventually, the white curtains fall and are replaced with new background frames, including a wall made of knotted rope. Lights shine on the ropes from behind to cast shadows around the theater and express Liliana’s feelings of being trapped by her marriage, as well as the fact that she is culturally expected to provide for her family, Silva said.

“She wants to follow her dreams and be with the person she loves,” she said. “She’s tied down because of money and her role in society as a woman, which forces her to support her family.”

Props within the single-room set also aid in communicating the play’s themes, Silva said. The room’s bed is the centerpiece of the stage. In between every scene, Yuya, the family servant, enters to make the bed, highlighting stereotyped and overlooked Latinx housemaids. Yuya must come in to tidy up because the bed is constantly unmade by other characters.

Blush said the roles of each character within society are reflected in the costuming as well. She said the use of costumes is most notable in the case of Yuya, who wears the same uniform in each scene even though the play takes place over the period of an entire week. Blush said the costuming choice especially enforces Yuya’s lower-class status when she is seen around more affluent women in the play who wear expensive dresses.

Silva’s character, Maritza, openly identifies as lesbian, and part of her story is also told by her costumes. Silva said Maritza wears a blazer, which represents her confidence in her sexual identity – she wears what she wants instead of what is considered the norm for her gender, such as fancy dresses. Her outfits are a stark contrast to those of Liliana, whose costly dresses reflect her abusive husband’s attempts to display her as his trophy wife, Silva said.

The play further highlights its cultural themes by employing music before and during the show. Because the play takes place near the border between Mexico and Texas, Silva said Tejano music – or Spanish music local to the area – will play when people walk in and take their seats. Even though the music precedes the actual play, it is used to signify the importance of Latin American culture in “Mala Hierba.”

More specifically, Liliana throws a party for Alberto’s birthday before escaping to the bedroom on stage after he insults her. While the party rages downstairs, she deals with the incident of verbal abuse by taking pills alongside music by the Mexican-American band Los Tigres del Norte. The music plays in the background to remind the audience of the party throughout the scene. Blush said the songs are accurate depictions of the music that is popular among the Latin American community in southern Texas.

“(Los Tigres del Norte), in their music, tackle social issues, which is interesting because the music is upbeat and danceable,” she said. “It’s music that I grew up listening to, and (when I spoke to friends from that region, it felt representative of the play.”

Blush said using music with Spanish lyrics also establishes “Mala Hierba” as distinct from other conventional plays. While many of the plays on American stages deal with problems specific to Americans, she said that the play is much more focused on Latinx themes and incorporates the cultures of the areas around southern Texas, including Mexico.

“I think it sets the audience to know that it’s different and isn’t typical American theater,” said Blush. “It has universal themes but we are seeing it through the lens of Latinx women.”