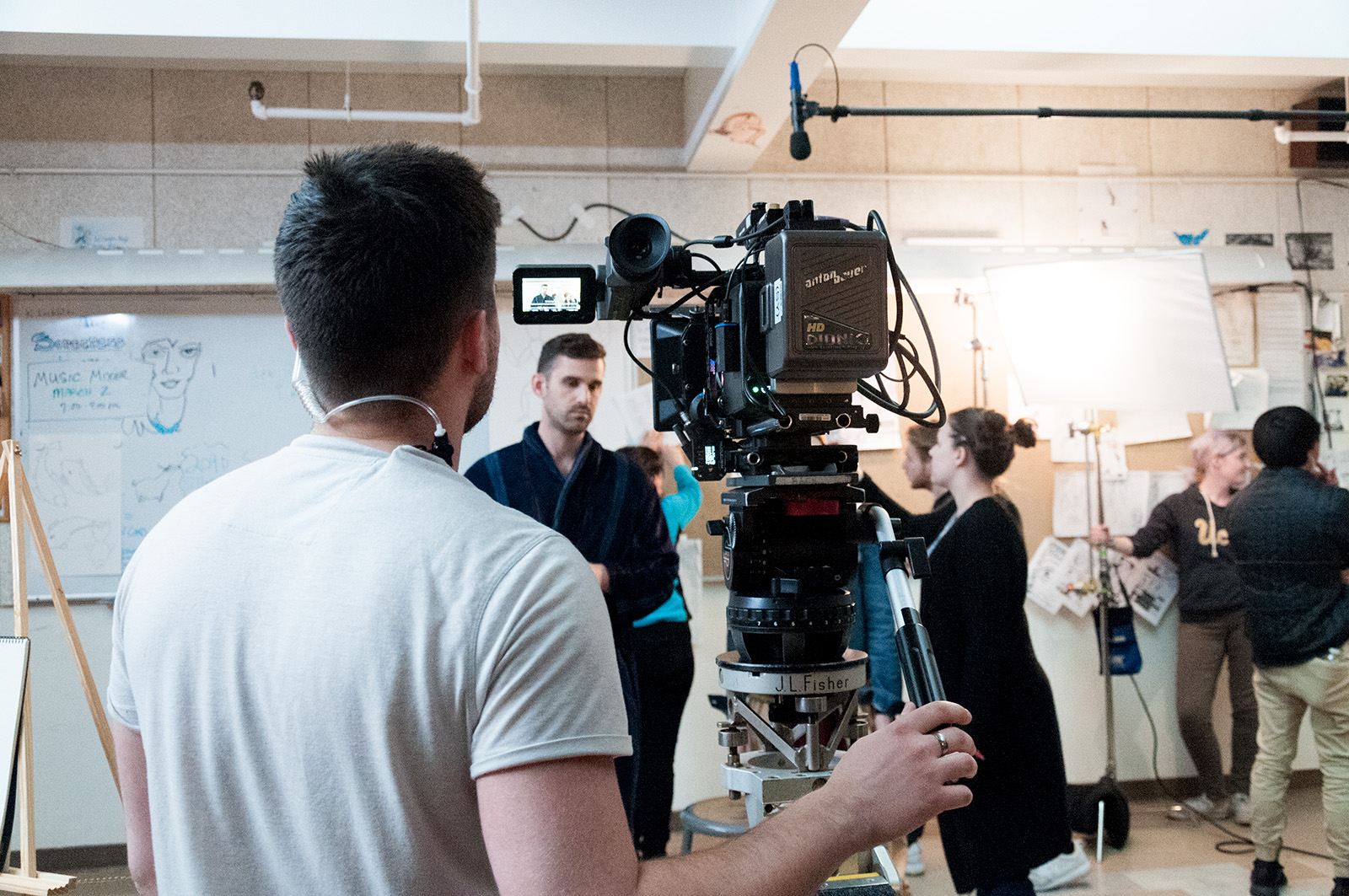 Graduate student Patrick Boyd wrote, directed and acted in the film “You, Me, & Him, & Him, & Him,” which focuses on an open relationship among five gay men living in Los Angeles. Boyd said the film aims to demonstrate the importance of self-acceptance and communication in gay relationships. (Liz Ketcham/Daily Bruin)

Patrick Boyd opens his film with a quote from Aristotle: “Love is composed of a single soul inhabiting two bodies.”

Boyd, a graduate student in directing, explores an open relationship between five gay men in his upcoming film, “You & Me, & Him, & Him, & Him.” He plays Will, who struggles to find his place within the relationship and contemplates whether to stay with the four men he loves or to leave them. Boyd drew on his own experiences navigating the gay community and observations of open relationships to write and direct the film, which he said is meant to demonstrate the importance of self-acceptance and communication in gay relationships, especially open relationships.

“I want it to be like a microcosm of gay life. … That’s also where the open relationship comes in, because I want all types of gay men to be represented in this,” Boyd said. “In the gay community, open relationships seem to be popular, but I’m not sure that many people are super happy in them.”

Boyd said the five partners are tight-knit, but still closed off from one another emotionally. They communicate through playful arguments and humorous banter, but fail to truly listen to one another until the end of the film.

“They start to open up and that is what makes them come alive to each other,” Boyd said. “They are seeing each other for more than just what they appear to be.”

Boyd wrote the film’s roles for actors he knew, letting their actual personalities organically create a dynamic on-screen group, he said. Charles Platt, a fourth-year theater student who plays Peter, one of Will’s four partners, said he appreciated the film’s attempts to subvert media stereotypes of gay men, such as the image of the physically fit gay man. Boyd said he also avoided framing his film in stereotypical LGBTQ contexts, such as the gay club scene of West Hollywood, instead placing the group’s interactions in ordinary settings, such as a Los Angeles diner.

“I think (Boyd) is really looking to bring in diversity into what queer culture is,” Platt said. “The cast is a group of people who have different ethnicities, different bodies that we’re not always used to seeing gay men have.”

Platt also said the film’s costuming reflects the different personalities of the five partners, which helps make each character distinct. For example, Peter’s bright teal rompers influenced Platt’s performance of a young, extroverted character seeking attention from the four other partners through his outspoken mannerisms. As Peter is unable to articulate his need for love, he instead points out his partners’ insecurities and creates tension in the group. His inability to communicate strains the relationship, Platt said.

“I think having the five characters in the relationship makes the flaws of each person overly apparent,” Platt said. “It’s very obvious that the lack of communication is hurting each person in a very specific way.”

Fed up with the group’s miscommunication and feeling alienated, Will pursues an external sexual affair. The group’s jealousy causes a fight to break out among all five partners inside a karaoke bar. Saturated in vivid lighting and trapped within the claustrophobic room, the scene heightens tensions and examines each character’s insecurities, said Derik Iverson, who plays another of the partners, Sammy.

Iverson said each character reflects on his identity in the context of the polyamorous relationship. Sammy’s connections to the other characters and his role in the group forces him to truly confront his discomfort about his own sexuality.

“So often you see other gay stories in the media where it’s just two people that pair up and then … have a wonderful adventure with some hardships along the way,” Iverson said. “It’s really interesting to see that from a group perspective.”

Boyd said though the film explores open relationships in the gay community, it is also intended to illustrate the importance of communication in relationships more generally.

“I think openness is so sexy and being who you are is great,” Boyd said. “There’s not really a message about open relationships, whether they’re good or bad. … I want anyone to watch it and really question how open they are with themselves,” he said.