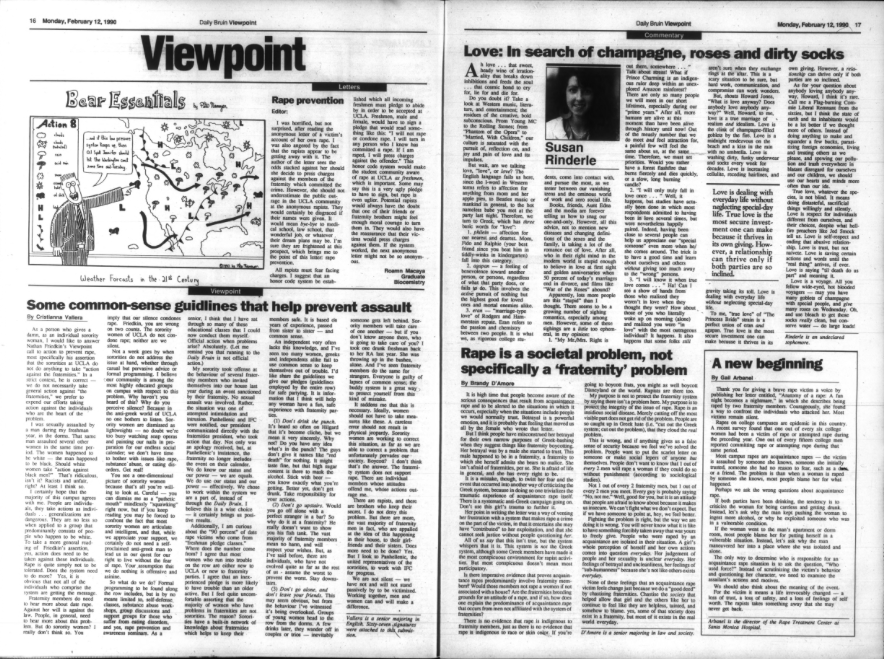 Kevin Dougherty, director of fraternity and sorority life and associate dean of students, said the ban was a step in the right direction and that it would remain until the UCLA Interfraternity Council develops new risk-management bylaws. However, people questioned whether the removal of alcohol on fraternity premises will actually help decrease instances of sexual assault.

Greek life is notorious for its party culture and is tainted with its fair share of sexual assault cases, so the ban comes as no surprise to many. And unfortunately, this is not the first time UCLA has had to endure a fraternity scandal similar to this one.

On Jan. 25, 1990, the Daily Bruin published a letter to the editor from a victim of sexual assault. The anonymous author claimed two fraternity brothers raped her at a house party. She also described how the odds were stacked against her if she decided to press charges against the brothers.

The letter was followed by uproar from multiple campus organizations, with some asking students to boycott fraternities altogether.

Representatives from the Women’s Coalition, Bruin Belles, Asian Pacific Coalition and a group of UCLA Fielding School of Public Health students organized a candlelight vigil on campus in response to the alleged rape. The vigil was created in honor of the victim and focused on safety and sexual harassment.

Numerous submissions from members of the UCLA community were submitted to the Bruin and were published Feb. 12, 1990. The submissions described different ways UCLA and students can address the problem of sexual assault on campus.

Cristianna Vallera, then-sorority member and English student, wrote that she, too, was sexually assaulted by a fraternity brother during her freshman year on the Hill. That same brother allegedly assaulted several other women.

In her piece, Vallera said many people, sorority and non-sorority women alike, “fail to use common sense to keep themselves out of trouble.” She then listed three guidelines given to sorority pledges to follow in order to practice “safe partying” at fraternity events.

Vallera added it saddened her that women have to take measures such as these to protect themselves from danger. However, she also said a boycott against fraternities was not the answer because the fraternity system itself does not support rape – individual members do.

Macaya suggested an honor-code system be established for all incoming pledges in order to be accepted by UCLA. Freshmen, male and female, would have to sign a statement condemning rape or anyone who is a perpetuator of it.

Macaya said this honor-code system would make the student community at UCLA aware of rape and encourage members of Greek life to “feel enough moral courage” to turn in their peers who have committed sexual assault.

On the other hand, Brandy D’Amore, then-law and society student, wrote a submission explaining why sexual assault was a societal problem, not a fraternity one.

“There is no evidence that rape is indigenous to fraternity members,” she said. “If you are going to boycott frats, you might as well boycott Disneyland or the world.”

D’Amore suggested UCLA chastise the society that allows students to be victims of sexual assault because Greek life is only a cloud covering up the real problems in our justice system and institutions.

Fast forward to almost 30 years later, sexual assault is still very prevalent on college campuses. The questions and conversations that took place in 1990 regarding this issue sound almost exactly the same as the ones we hear today.

There is no sign as to when the current alcohol ban will be lifted for fraternities, but students can only wonder what UCLA will do to finally say #TimesUp on sexual assault.