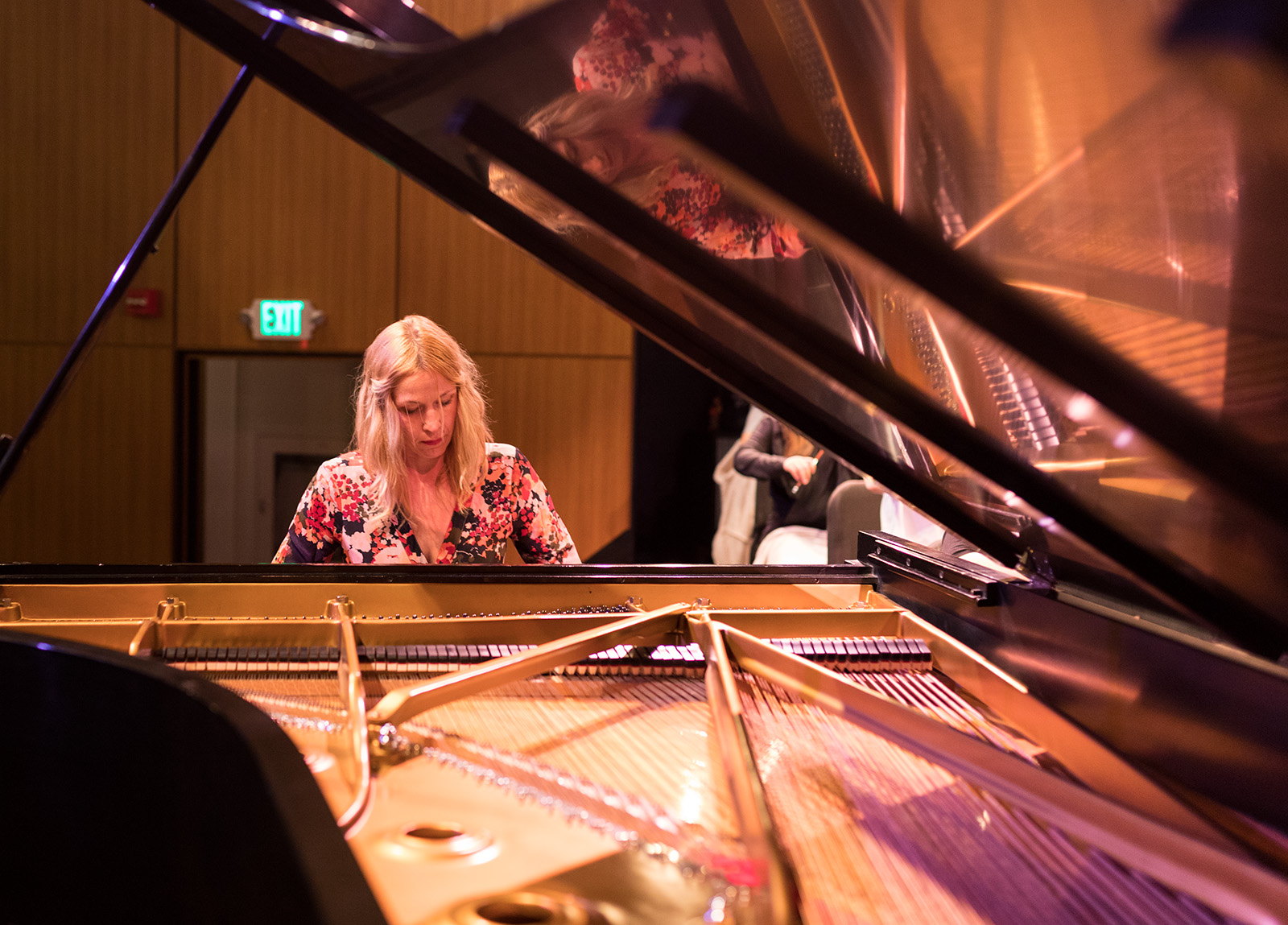 Irina Bazik, a doctoral student in music, will perform Chopin’s Piano Concerto No. 1 in E minor, Op. 11. Bazik said the piece was specifically composed for a piano to play in front of an orchestra. (Chengcheng Zhang/Daily Bruin)

Irina Bazik and Sophia Su both auditioned for the “14th Annual All-Star Concert” on their birthdays.

The next day, they found out they were selected to perform pieces in front of the UCLA Philharmonia.

Hosted by the UCLA Herb Alpert School of Music and the UCLA Philharmonia, the all-star concert will showcase eight solo piano, violin, flute, cello and baritone performers, who will play alongside the Philharmonia on Thursday night in Royce Hall. Neal Stulberg, the department chair for the UCLA Herb Alpert School of Music, said he created the concert to give students the uncommon opportunity to perform in front of a symphony orchestra.

“Standing in front of a symphony orchestra and performing as a soloist is a peak experience for any musician,” Stulberg said. “For a single musician to step into the spotlight in front of 70 or 80 musicians and play this leading role is a very special privilege and an exhilarating experience.”

All of the performers will perform individual pieces backed by the UCLA Philharmonia. Su, a first-year music student and a pianist, will perform Mendelssohn’s Piano Concerto No 1. in G minor, Op. 25. She said she finds the fast-paced tune particularly fun because she feels a cathartic release as her fingers exuberantly dash from key to key.

“You kind of just lose yourself in the music. With some pieces, you’re kind of overthinking what to do, but with this piece you let yourself go, and the music guides you,” Su said. “You don’t have to force anything out.”

Euan Shields, a first-year music student, will perform Schumann’s Piano Concerto in A minor, Op. 54 on the cello. Schumann wrote the piece in the later part of his life before he ended up in an asylum. Musicians often associate the piece with Schumann’s hardships later in life. However, Shields said he chose to perform the piece because he finds it both intelligent and emotionally sensitive. The moods of the piece change frequently, yet seamlessly, he added.

“It’s so close to the human voice, and the piece goes from … rumbling low notes … all the way to like a soprano belting in an opera,” Shields said. “It kind of imposes the entire human vocal range as well as the emotional range.”

Shields said performing with a symphony orchestra will be an enchanting experience because the orchestra further dramatizes the emotion of the song. He said playing a concerto is more complex than just playing alongside other musicians and it feels like a dialogue between him and the orchestra.

“At one moment I’m playing a duet with a single flutist – in a split second I’m soaring above the entire string section – the whole band roars in triumph – and suddenly I find myself uttering a soliloquy, the whole orchestra merely listening,” Shields said.

Irina Bazik, a doctoral student in music performance, will play Chopin’s Piano Concerto No. 1 in E minor, Op. 11. Bazik said the piece she is playing is specifically composed for piano and orchestra, which work together to produce a conversational tone.

As the concert approaches, Su said she hopes her performance at Royce Hall can help her to feel more confident in her own skin when she is performing. She said the all-star concert stands out from other competitions and concerts she’s been in because it showcases such a wide range of instruments and will give her a chance to hear her peers perform.

“I just want to be able to enjoy myself and not be so nervous,” she said. “It’s a chance for me to connect with the audience in a way that we don’t usually get to. … I hope my music speaks to everyone.