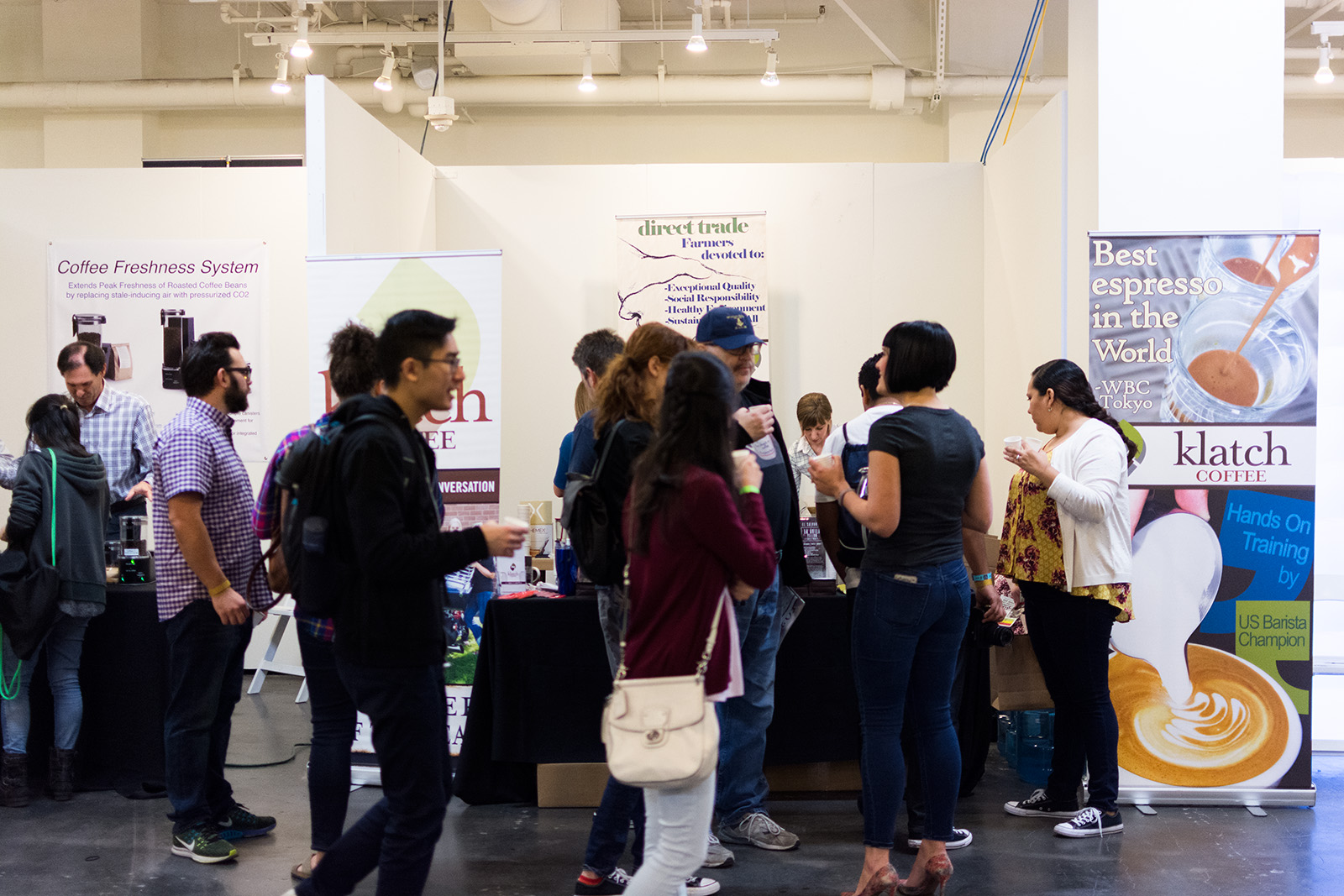 Excitement brewed for javaphiles this weekend.

Caffeine lovers came together Saturday and Sunday for CoffeeCon LA 2018 at The Reef in Downtown Los Angeles. Curated for coffee connoisseurs and recent enthusiasts alike, the event hosted approximately 50 vendors of coffee and coffee-related products, as well as special presentations and master classes on topics such as latte art.

The distinct, earthy aroma of freshly brewed coffee took over The Reef conference center, where the exhibition’s set-up included four or five rows of stalls, each resembling a miniature street lined with vendors on both sides. While Californian companies with locally sourced coffee dominated the scene, a variety of importers and international suppliers also set up shop.

“A Cup of Puerto Rico,” an LA-based online store, sold its specialty coffee, which it imports from a select few haciendas, or family-owned estates on the island. Company representatives at the stall said Puerto Rican coffee is generally more sweet and smooth, and thus doesn’t usually need any additions.

Other vendors worked in different areas of coffee culture, such as brewing equipment, coffee-based cosmetics and dessert accompaniments. The Los Angeles Coffee Club, for instance, acts as a subscription-based supplier of coffee beans, where subscribers sign up to receive a new blend each week from one of Los Angeles’ 60-odd roasters. The club’s sister company Binx Coffee follows a similar business model tailored to offices, with clients like YouTube and the Hollywood Bowl.

In addition to hosting local coffee businesses, CoffeeConLA had five large rooms – including the lecture classroom and the espresso classroom – where various tastings, seminars and master classes took place.

The special events kicked off with a 10-minute presentation on how to host a cupping party – a gathering in which people come together to taste and appreciate coffee, much like others do with wine. Presenter Patricia Sinnott, a CoffeeCon co-creator, began by explaining to the audience the Specialty Coffee Association of America’s flavor wheel – a comprehensive, circular chart that helps viewers better analyze the flavors of various coffees. The innermost circle of the wheel breaks coffee into nine broad categories including “fruity,” “floral” and “nutty,” and the next circle breaks one of the nine categories into subcategories. For example, “fruity” is split up into “berry” and “citrus fruit,” which are then further divided into the names of specific fruits.

A later event, led by Heather Perry of Klatch Coffee, taught expo-goers latte art. Perry began her seminar by breaking down the process into steps, which included the steaming, grooming and pouring of the milk. She said the consistency of the milk is integral to the art and encouraged audience members to participate, getting them to chant out certain parts of the process.

“You are the boss of your milk,” Perry said. “Don’t let your milk punk you.”

Perry went on to demonstrate three different designs in which one could pour their milk — the monkshead, the heart and the rosetta. While the event could have been more interactive than slides on a screen, Perry’s heartening knowledge of the subject and attention to detail made the show engaging.

In between events, patrons meandered between rows of vendors, tasting their brews and collecting freebies. While the majority of the stalls were reserved for California-based for-profit coffee sellers, philanthropic organizations had their booths scattered throughout.

Restoration Roasters, a nonprofit coffee shop based in Corona, California, served up a medium roast cold brew cut to retain the coffee’s flavor without burning it off. The chilled cup provided an exceptionally smooth texture with hints of sourness, but with no bitter aftertaste. All of the organization’s proceeds go to the Corona Norco Rescue Mission, a transitional program for people who were formerly homeless. Restoration Roasters also allows its beneficiaries to volunteer as workers from their coffee shop to facilitate their integration into society, said Sofi Tongson of Restoration Roasters.

Another welfare-based vendor, Muddy Paw Coffee, names its coffee blends after dogs and its teas after cats. The founders of Muddy Paw have been coffee roasters for 25 years, but started their charitable initiative after Hurricane Katrina, when they realized numerous animal shelters and organizations were left in need of support. Now Muddy Paw has a brick-and-mortar store in Silver Lake and supports a new California-based animal shelter every two months or so before moving to the next one.

Muddy Paw sampled a strong, dark blend with a lingering earthiness, but other stalls offered different flavors such as a cherry-based dark blend at the Specialty Coffee Association of America stall, and the Culver City-based Bar Nine’s textured Lycello – a Gesha brew with hints of lychee and lemon.

Between lightly-roasted floral infusions to toastier flavors with even textures, CoffeeCon LA 2018 offered a brew for everyone.