The Quad: More than our hair 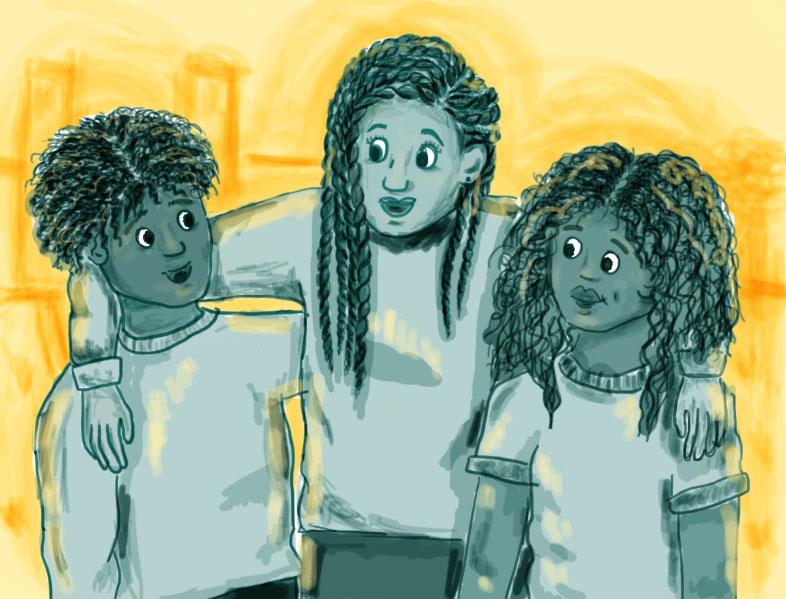 I am a black girl who loves her giant box braids. Recently, I was invited to a conference for one of the largest accounting firms in the world. When I told my mom with all the excitement a second-year college student can have, the first thing she told me was “Make sure you take out your braids and straighten your hair.”

The average person of African descent has kinky, curly hair. This texture is nearly the antithesis of white beauty standards that black Americans and people of African descent, namely women, have been subject to dating back to slavery in America.

Ultimately, it was society’s backward, racial bias that birthed many of the styles black women wore and continue to wear today and opened a $500 billion dollar market of chemicals, heat and synthetic hair that are used to give the appearance of straight hair. From the hot comb to relaxers, straight hair was and is continuously marketed to black women as beautiful. This bias doesn’t just translate to beauty endeavors, but also professional ones.

Since the resurgence of the natural hair movement in the 2000s in which black people and people of African descent began to cultivate acceptance and normalization of their hair textures, the United States has seen multiple cases of hair discrimination in the workplace. These cases have often involved employer’s enforcing dress and conduct policies that ban traditional black hairstyles, or requiring people of African descent to change their hair in order to gain employment. These “changes” typically require straightening one’s hair or, if the person has dreads, cutting all the hair off.

The truth of the matter is hair discrimination isn’t about the hair at all. It is the conclusions that are drawn based on the hair.

A 2016 study called “Good Hair,” published by researchers at Perception Institute, is quite disturbing because it emphasizes an even larger societal issue. The reason black hair is seen as unattractive, unprofessional and unkempt is that the person on which the hair is on is seen as inferior. The reason is racism.

This particular brand of racism does not exist in a vacuum. It has influenced how black people, mainly black women, feel about and take care of their hair. Many women feel extra anxiety about their hair and even go as far as using damaging chemicals and heat to straighten their hair.

It is very easy to feel isolated from the effects of racism at our liberal, open-minded school, but hair discrimination is present on campus – particularly at job fairs.

During fall quarter, I attended a hiring event at UCLA. While I was nervous about meeting new people that could open many doors for me, most of my anxiety stemmed from my appearance. My hair, despite being pulled back, was in braids. Recruiters often looked at my hair before they looked or even spoke to me.

Dominique Troupe, a third-year sociology student and Black Bruin, echoed this sentiment when she spoke about how her mother and aunts often straightened their hair to get jobs.

There is often pressure to change one’s identity in professional settings. This pressure comes from the perpetual narrative that white people are the status quo and anything that is different must not only adhere, but go beyond the standard put forth and upheld by white people. In my opinion, if you lack the physical traits of a white person, you must be exceptional in skills, personality and education.

“In order to get a job here in America, you need to be as close to white as you can be,” Troupe said. “My hair is red and curly, so … going to an interview I know I have to bring extra (personality, knowledge and qualifications).”

Most non-black people are unaware of this pressure to conform to Eurocentric beauty standards and how racism and discrimination influence perceptions of black hair. Black hair has been so repressed in culture that it is often subject to numerous questions. Olamide Olowe, a fourth-year political science student, explained how she feels about black hair being questioned.

“It’s not my job (to explain my hair to other people),” Olowe said. “(They don’t know) what we do – we’re so magical (in the) things that we do and the way we make ends meet, especially when it comes to our hair. When we create, they don’t understand.”

The wonder is understandable, but sometimes lines are crossed as black hair becomes more of a spectacle than a feature on someone’s body. Olowe explained that non-black persons of color are fascinated by her hair and she is quite open to questions about it.

“Albeit, don’t be putting your fingers in my scalp,” she said.

From my research and conversations with Black Bruins, I found black hair is still stigmatized, and people do make assumptions about who someone is based on their hair.

These assumptions are a form of racism, yet non-black people are fascinated by black hair and even appropriate it (cough, cough Kardashians). Black hair is both valued and not, but black people are doing an amazing job of accepting themselves despite whatever anyone else thinks.

For Oyinda Akinnusi, a second-year neuroscience student, that journey of self acceptance was not always easy. She went natural two years ago.

“I cried about (my hair),” Akinnusi said. “Now I accept my hair for what it is. I can’t really have any other type of hair.”

The journey of self acceptance is an arduous one, but more black women are taking the necessary steps to not only accept their hair type, but themselves. This does not mean that if black people wear their hair straight, chemically process their hair, or wear wigs and other synthetic hair products they do not accept themselves. It simply means that black hair is more than just hair – it is history, oppression, triumph and self-love.

To my Black Bruins, your hair is heritage. Wear your crown.