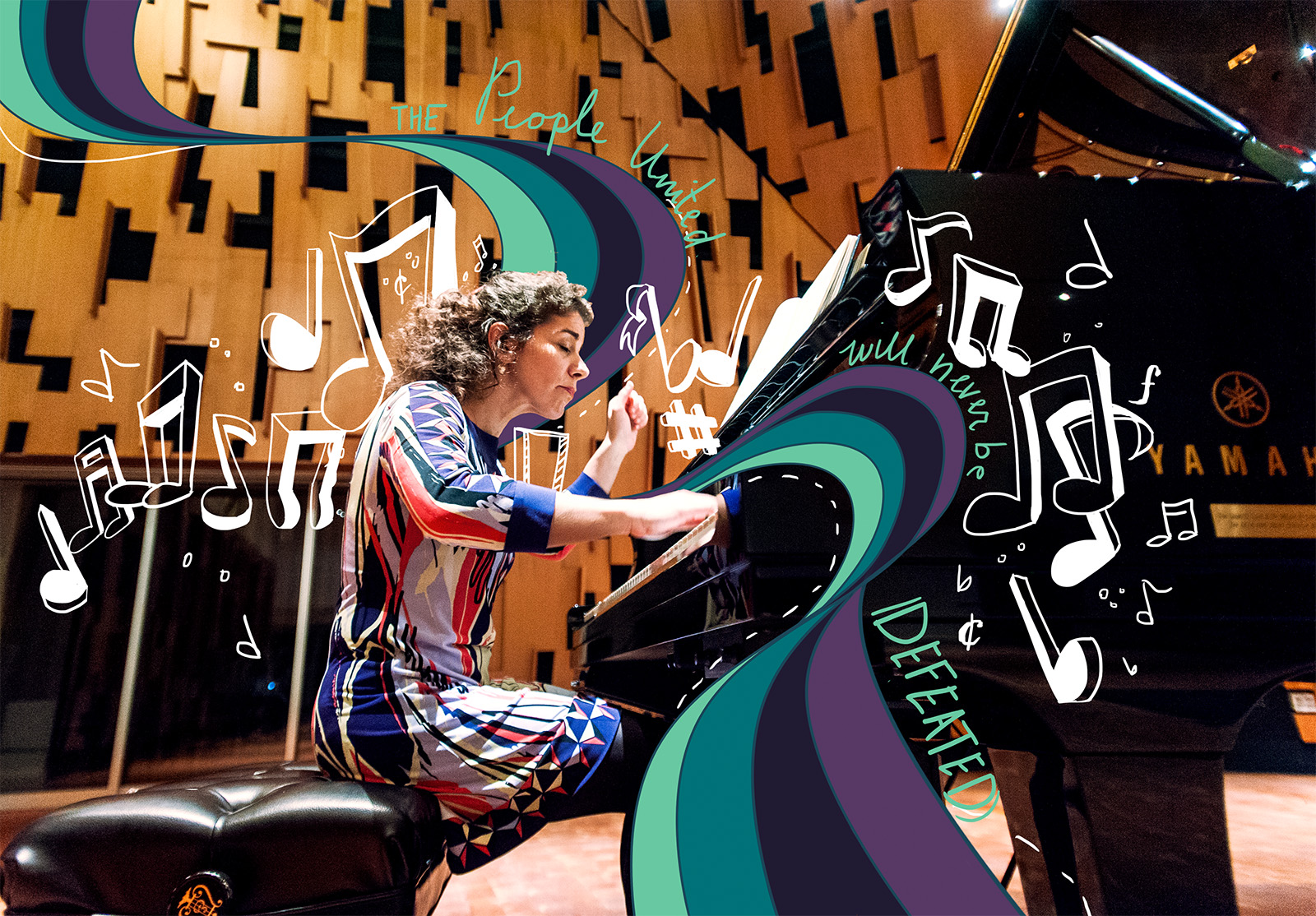 Inna Faliks, a concert pianist and UCLA professor of piano, will perform the protest composition “The People United Will Never Be Defeated!” at the Jacaranda Concert Series on Saturday. Frederic Rzewski composed the piece in the 1970s during the dictatorship of Augusto Pinochet in Chile. (Photo by Mackenzie Coffman/Daily Bruin, Photo Illustration by Ludi Zhu)

Inna Faliks’ Soviet Union household only had three rooms for seven people and no telephone – but it did have music.

Growing up, Faliks’ parents encouraged a creative childhood that included reading books and cultivating interest in music. Now a concert pianist and UCLA professor of piano, Faliks will perform the protest composition “The People United Will Never Be Defeated!” at the Jacaranda Concert Series on Saturday. Written by piano composer Frederic Rzewski, “The People United Will Never Be Defeated!” was composed in the 1970s during the dictatorship of Augusto Pinochet in Chile.

The Daily Bruin’s Susana Alcantar spoke with Faliks about the upcoming performance, how growing up in the Soviet Union influences the way she performs and her take on how protest music can influence society.

DB: Could you explain the context of “The People United Will Never Be Defeated!”

IF: As all great pieces of music, “The People United Will Never Be Defeated!” is a lifetime kind of piece, a work that stays and evolves with an artist for many, many years. I find it to be a piece that is at once incredibly, mathematically and masterfully structured, and improvisatory in scope, expression and flair. To me, it is deeply coloristic, very personal and, I have to say, very tragic. Each variation has its own very distinct character. … In the end, it’s all about the drama of it, the character, the passion of this incredible protest that resounded around the world when the Ortega song first appeared.

At the moment, I think that despite the exclamation point in the title, the piece is profoundly tragic and very much a question. Can the people united ever be defeated? We don’t know. We just have to keep trying. There are so many ways to try – hence the many variations. Do they work, these ways? They haven’t yet. But maybe they will. Despite tragedy, there is some hope.

DB: You mentioned that “The People United Will Never Be Defeated!” is tragic, could you explain why?

IF: I think the piece is tragic but not the song so much. The song is a call for togetherness. It’s a call of unity. The Sergio Ortega song was written in the ’70s and then the song became a symbol during the regime of Pinochet when he was a dictator. The song was a freedom song for the people suffering from him. The piece of course has its elements of humor, it has so much passion, so much color and so much freedom for the pianist, but yes I think it’s tragic.

I think it’s tragic today because we are not in a good place. I think we are in an ugly place so I can’t look at this piece at the moment as anything but tragic because despite the title which has an exclamation … I think the piece was tragic when (Rzewski) wrote it. I think it specifically rings true now. It offers a lot of hope which is why it fits this program so beautifully.

DB: Do you have an interest in protest music?

IF: Not in particular. I love great music that has substance. I have an interest in pairing music with poetry and other art forms in various ways of combining them. If that happens to be protest music then good, but I wouldn’t say I specifically have an interest in protest music. I mean now I do because I am playing this amazing work, but I wouldn’t limit myself to saying that that’s a specific direction.

DB: Do you believe any of your personal experiences growing up in the Soviet Union influence the way you perform?

IF: I just recorded a CD that’s called “Polonaise-fantasie: The Story of a Pianist” which is a monologue and a recital in one. … In that CD I chronicle my upbringing in the former Soviet Union and how that influenced my playing. It’s basically the story of how I became a musician. … It was the Soviet Regime – I didn’t grow up with the same privileges as someone who grew up in this country but I had music and an immensely creative childhood. So none of these things that I realize now are abnormal and missing, none of them felt like anything important because you focus on other things and I think that’s key. So, in a way, the fact that I had a very creative and imaginative upbringing, thanks to my parents, thanks to the books that I read and the fact that my various interests were encouraged, I think that really made me who I am as an artist today. I think that planted all the seeds during the childhood.

DB: What role do you believe music can play in a protest context?

IF: As I mentioned earlier, I think once you speak a word it’s out there. You can’t take it back, and not everyone is a politician, not everyone knows how to speak well, what to say always, but music comes from the heart, a very immediate place. Performing music I think says things that words cannot carry across. I think music is more immediate and in a way it’s much more subtle.