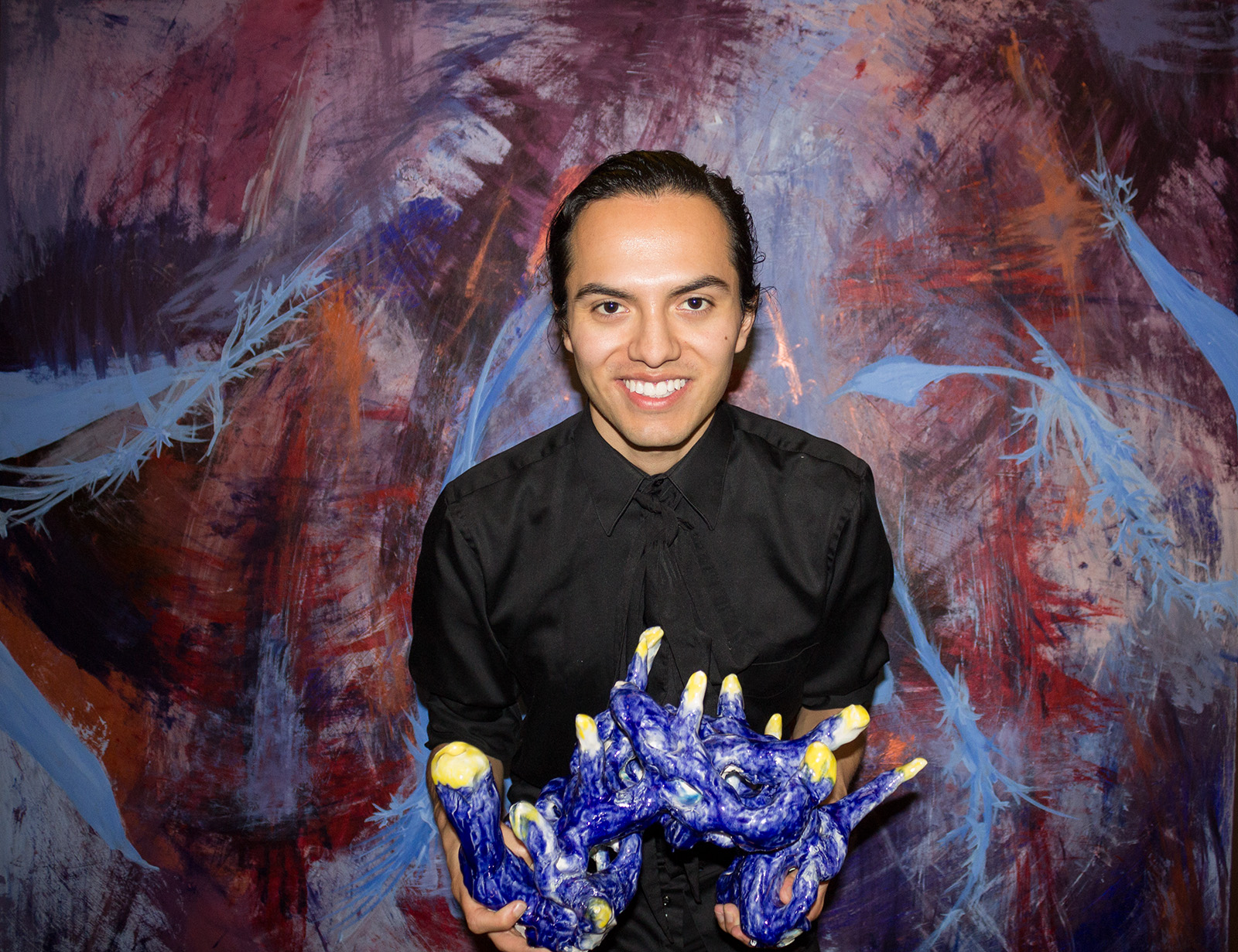 Fourth-year art and art history student Ricky Amadour created an abstract acrylic painting entitled “Poolboy,” which features broad strokes of purple paint in an effort to evoke a feeling of springtime without explicitly depicting any images associated with the season. (Manpreet Grewal/Daily Bruin)

Students in search of some sunlit studying need not look any further than the campus library’s rotunda.

The Art History Undergraduate Student Association created an art exhibition in Powell Library focusing on different incarnations of the four seasons, revealing each artists’ personal relation to seasonal change. The exhibition opened Thursday and will run until Feb. 1 in the rotunda of Powell Library.

“At its core, the exhibition is about seasons and change struggling in a city that is eternally the same,” said Ricky Amadour, a fourth-year art and art history student.

The idea for the AHUSA exhibition’s theme sprang from a joke about the irony of seasonal change within Los Angeles, a city famous for its year-round summer. Madeline Duncan, the co-president of AHUSA, said the members of the association then came together to form an art exhibit around the theme of seasons.

“From the joke, (Amadour) created a great curatorial statement that looked at temporal aspects and what it means to change in a space that doesn’t always change around you,” said Duncan. “I think a lot of our pieces embody that.”

Members of AHUSA have been working to put together the exhibition since the beginning of fall quarter. The current exhibition is the organization’s first in the new school year, following an exhibition during summer 2016.

The organization divided the exhibition so that each season inhabits its own corner of the Powell rotunda. Amadour largely curated the event and has several paintings featured in the exhibition’s spring corner. One acrylic piece, titled “Poolboy,” depicts spring through abstract terms. The painting features broad strokes of purple, which dominate the canvas in an effort to evoke a feeling of spring without explicitly depicting any elements associated with the season.

“I was thinking about just relative life and how the seasons affect us, especially with the recent fire and its impact on UCLA,” said Amadour. “But also how we enjoy the seasons.”

The rotunda’s immediate left corner hosts a large oil-painted canvas depicting six rhombus-studded cows grazing closely together in a pasture, one with its hoof on a rotund wheel of cheese, and two cats in the forefront. Richard Nam, a third-year art student, painted the piece and worked to put a number of symbolic meanings into the painting, using different forms of cheese to portray concepts such as memory and change. Nam said his art style is reflective of nature, which to him is abstract and filled with patterns.

“I interpret the milk as memory because, like our memory, it ages through time,” he said. “When someone looks back on their memories, they should smile and say cheese.”

The exhibition not only features paintings but videography work as well. Alaina Dexter, a first-year art student, contributed a piece featuring a series of one- to 1 1/2-second clips taken every day for the past year. The piece follows Dexter throughout her last year of high school in North Carolina and her fall quarter at UCLA.

“I think about root feelings and figure out how to represent that in art,” she said. “It can communicate to people in totally different ways than I can with my words.”

In the opposite corner of the rotunda, third-year art student Ago Visconti placed a small flower on her painting to sign her artwork, capturing the presence of the seasons in her personal aesthetic. Through artistic choices like Visconti’s, the AHUSA exhibition reconciles the concept of seasonal change with what is traditionally thought of as an environment, showcasing the troublesome aspects of change alongside its beauty, Amadour said.

“When we put the exhibit together, we thought about seasonal change and all the questions it inspires,” Amadour said. “What about climate change? What about just life in general and how the seasons affect it? These are the questions our art deals with.”