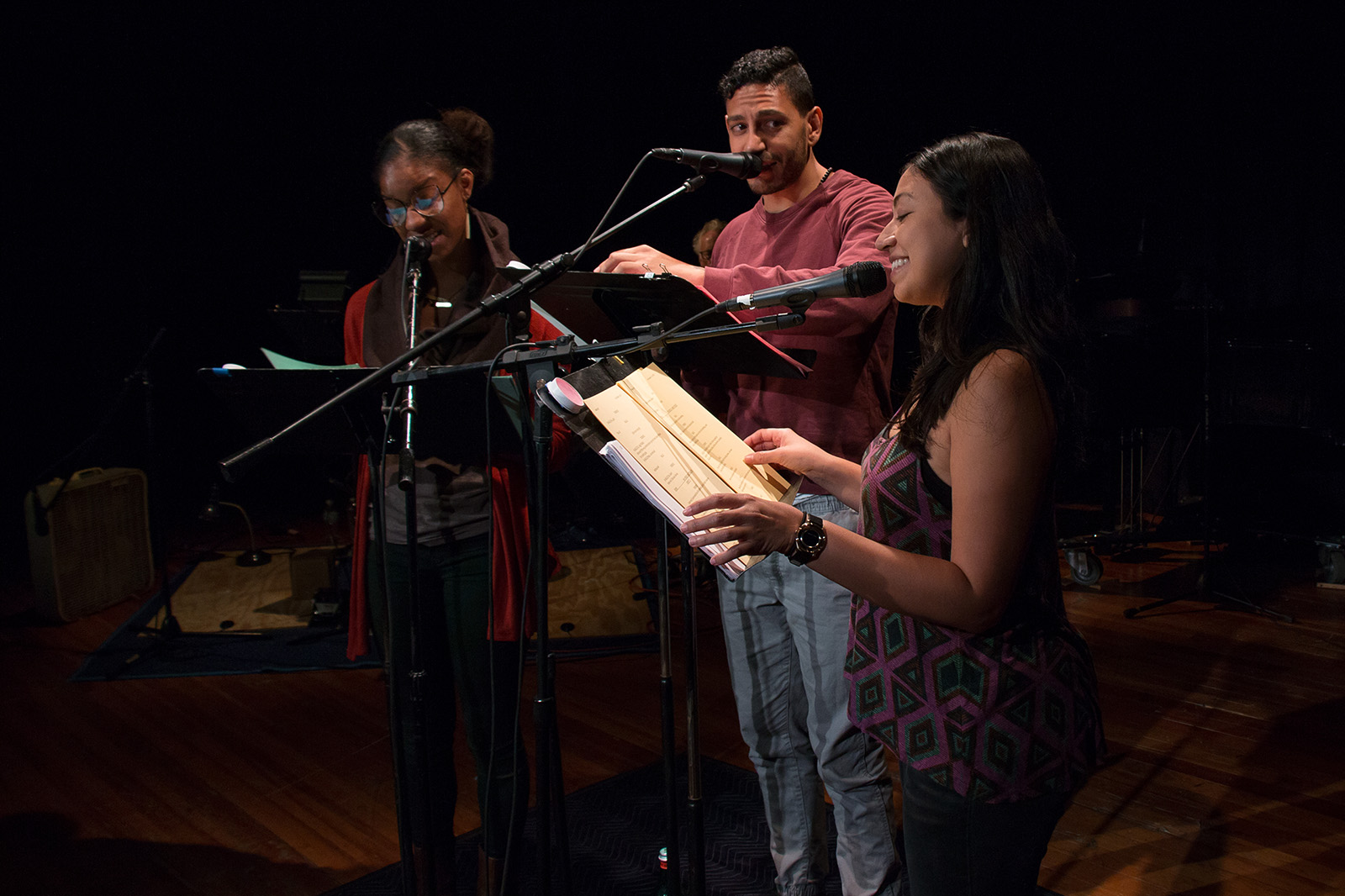 Actors Donna Simone Johnson, Christopher Rivas and Natalie Camunas play all of the parts in “Pang!”, a series of live radio plays directed by UCLA professor Dan Froot. The show is based on the real experiences of three families across the United States who have dealt with food insecurity, discrimination toward immigrants, the foreclosure crisis and gun violence. (Courtesy of Dan Froot)

Several audience members at “Pang!,” a series of three live radio plays, sit around a kitchen table onstage instead of in their seats.

Before, during and after the show, the play’s director sits down at the table and encourages the audience members to discuss food insecurity, housing issues and other core themes of the play. Sometimes, a member of one of the three families whose stories inspired the play joins them.

”Pang!”, which will run Saturday and Sunday at the 24th STreet Theatre, originally aimed to tell the stories of real families across the United States experiencing food insecurity. However, as the production team learned more about the families’ lives over several years of interviews, the script expanded to include other issues they dealt with, including discrimination toward immigrants, the foreclosure crisis and gun violence. “Pang!” debuted in Cedar Rapids, Iowa, and will travel to Miami in January.

Dan Froot, the play’s director, lead writer and a world arts and cultures professor, consulted with three families from Los Angeles, Miami and Cedar Rapids. He and the show’s production team solicited input from the families as the script developed to help decide how to dramatize or modify their stories for the stage.

“The extensive nature of the research that we’ve done … has drawn us into close, trusting relationships with the families … and the surrounding communities,” Froot said. “Those relationships are the foundation of the plays themselves.”

The team read scripts about once a month to the families so they could give feedback on how they told their stories. Froot said the father of the Cedar Rapids-based family was particularly vocal about wanting the production to focus on his life in America rather than his background as a refugee from Burundi. He also helped make the play more accurate by emphasizing that actors speaking in his native language, Kirundi, should not gesture much with their hands because it would be inauthentic to his culture.

However, Froot said the production team sometimes changed details or timelines in the families’ stories to create stronger dramatic impact. In one case, a family said the way he modified an event for the script told their story better than the original version.

The family in Miami told him about a car that crashed into a playground near their house that their children had been playing in less than a minute earlier. Car crashes were frequent at that intersection they said, but the city hadn’t listened to the family’s repeated requests to build a four-way stop there.

In the play, the car crash happens while the children are playing in the playground to emphasize the city’s indifference to the needs of a poor community. Froot said the story also needed an event that emphasized how the young boy in the family became more aware of the threats of the world around him and lost some of his innocence.

“The family felt that this change tells the story of their situation better than the strict facts,” Froot said.

Events that happened to the families during the interview process often served as inspiration for the plays, Froot said. The production team had worked with the Los Angeles-based family for about eight months when the bank foreclosed on their home, which the family had owned since 1950. The family’s mother, uncle and 10 children moved to a two-bedroom house two hours away in Hemet, California, where Froot met with them every other week to conduct interviews, as well as cook, clean and help with childcare.

The play based on the family’s story centered on the foreclosure, Froot said. Actor Christopher Rivas was tasked with playing both a predatory mortgage adjuster and the uncle struggling to get the family’s house back. He originally played the mortgage adjuster as a purely villainous character, but realized he had to soften the role to make it more believable that the uncle would have trusted him enough for him to con the family out of their house.

Rivas said he did not try to mimic or impersonate the individuals he was portraying and instead focused on creating a play that was honest to their stories.

“(Froot) wants to honor a story and get it right,” he said. “So many times, we could’ve cut corners for entertainment purposes, but now we have something both entertaining and honest.”

Conching Matthews, the mother of the Los Angeles-based family, said she hopes the show will help audience members understand how home foreclosures can affect people of color and low-income communities.

“When you think about your story, you don’t often think of it reaching people,” she said. “It’s very touching what (Froot) has done for the three families, and I’m hoping it reaches enough people so that we can take charge of what’s going on around us.”

Froot said he hopes the show will help people who qualify for social services, like food stamps, feel less stigmatized and challenge stereotypes more affluent audience members might have about low-income individuals and families, such as that they don’t want to work. The production team hopes to eventually release the show as a podcast, he added.

“If we can experience some of the human dimensions of what it feels like … to be in those circumstances, we can be moved to volunteer, contribute or treat people differently,” Froot said.