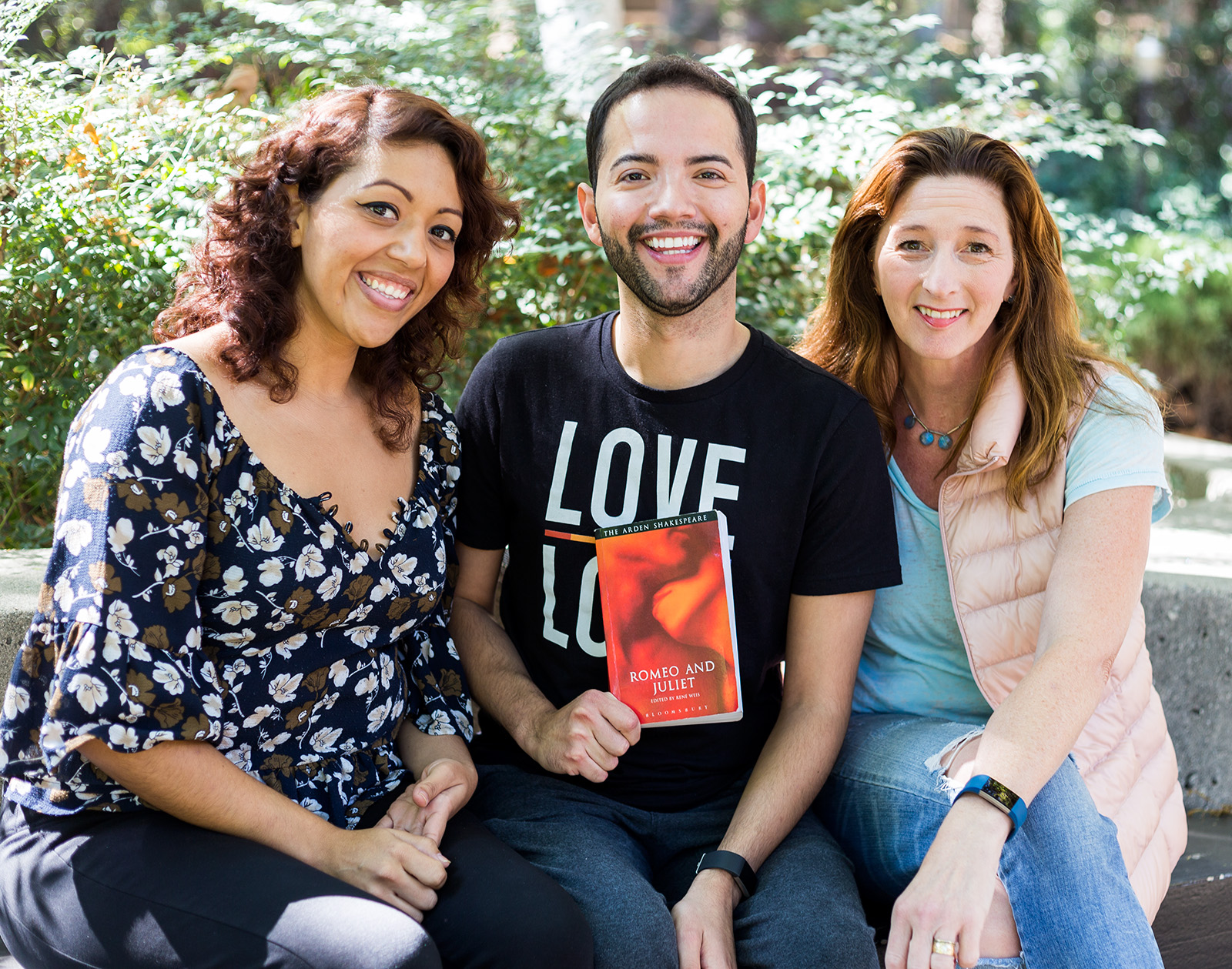 Lesley Elizondo, Oscar Emmanuel Fabela and Beth Lane created the short film “Romeo and Julio,” an adaptation of Shakespeare’s play “Romeo and Juliet” that features a romance between two gay males. The film works to incorporate the experiences of immigrants and members of the LGBTQ community into its plot line. (Alyssa Dorn/Daily Bruin senior staff)

Romeo leaped over a fence and climbed onto a balcony to reunite with his Julio in a new short film adaptation of the classic play.

In “Romeo and Julio,” Oscar Emmanuel Fabela and two fellow graduate students directed and filmed adaptations of several scenes from Shakespeare’s original play “Romeo and Juliet” to tell an inclusive story featuring the love between a white man, Romeo, and a Latino man, Julio. The short will screen at a yet-to-be-announced date this quarter.

Fabela, a graduate acting student, said he felt pigeonholed as a gay artist of color after he was only called in for roles as gangsters or thugs. Inspired by the success of “Hamilton: An American Musical,” Fabela decided to create his own project, “Romeo and Julio,” with co-producers Lesley Elizondo and Beth Lane.

For example, in a line from the original play the nurse playfully reprimands Juliet by calling her a wench. Fabela changed wench to wasp after researching what Shakespeare might have used as a loving insult for a man. Fabela said that the original story is flexible enough to be adapted with minor changes to show contemporary issues using a male lead of color.

“This story, being put through an immigrant, gay lens, still works,” he said. “We can use this over 400-year-old text and change nothing but the pronouns and it’s still relevant.”

Apart from featuring a reimagined Juliet, “Romeo and Julio” is set in a traditional-modern hybrid universe where people wear jeans and speak “Shakespearean” English at the same time. Lane, a graduate acting student who plays the nurse in the film, said the emotions felt by the characters are not bound by gender or era.

The timelessness of the text gives the play enough flexibility to be adapted for LGBTQ and Latino communities, Fabela said. The original play features a scene in which Romeo must flee the country after killing a man. In the students’ version, graduate student and cinematographer Elizondo directed Fabela not to let go of his on-screen lover Romeo, who must leave Verona, Italy, forever after being banished for his crime.

As a Mexican immigrant, Fabela said he used his own fears of loved ones being banished from the country to inform his emotional choices while acting. He thought of them as he performed his scenes, and the tears he shed in the film were genuine.

“I lost it, because I know what it’s like to have that fear that one day your family will be just gone,” he said.

Fabela said he has friends who are immigrants and who are in same-sex marriages. The film’s use of a gay, male, Latino Juliet puts a new spin on the classic and raises the question of whether the men can’t be together due to their race or gender, Fabela said.

“That’s the question of the film: Why are they not allowed to be together? That’s what I want people to walk away with,” he said. “It’s pointless hate and marginalization that’s keeping their love apart, but they’re willing to fight through anything to be together.”

Elizondo said the production team aimed to provide a voice to both the LGBTQ community and the Latino community. The fact that Juliet became a Latino rather than a white male creates an intersection of communities, she said.

While working on the set, Elizondo donated set pieces she had brought back with her from Mexico to decorate Julio’s room, hinting at his connection to Mexico. The producers chose not to use an accent for Julio to avoid stereotyping the Latino community, Elizondo said.

“We don’t need to spoon-feed people what community the character is from,” she said. “We wanted to get away from ‘oh, yeah they’re ethnic because they speak (weirdly).'”

Lane said the team is now working to get funding to turn all of the original play’s scenes into a web series. Fabela said the project is important because growing up he never saw films in which his communities were represented – he hopes that “Romeo and Julio” might be that film for someone else.