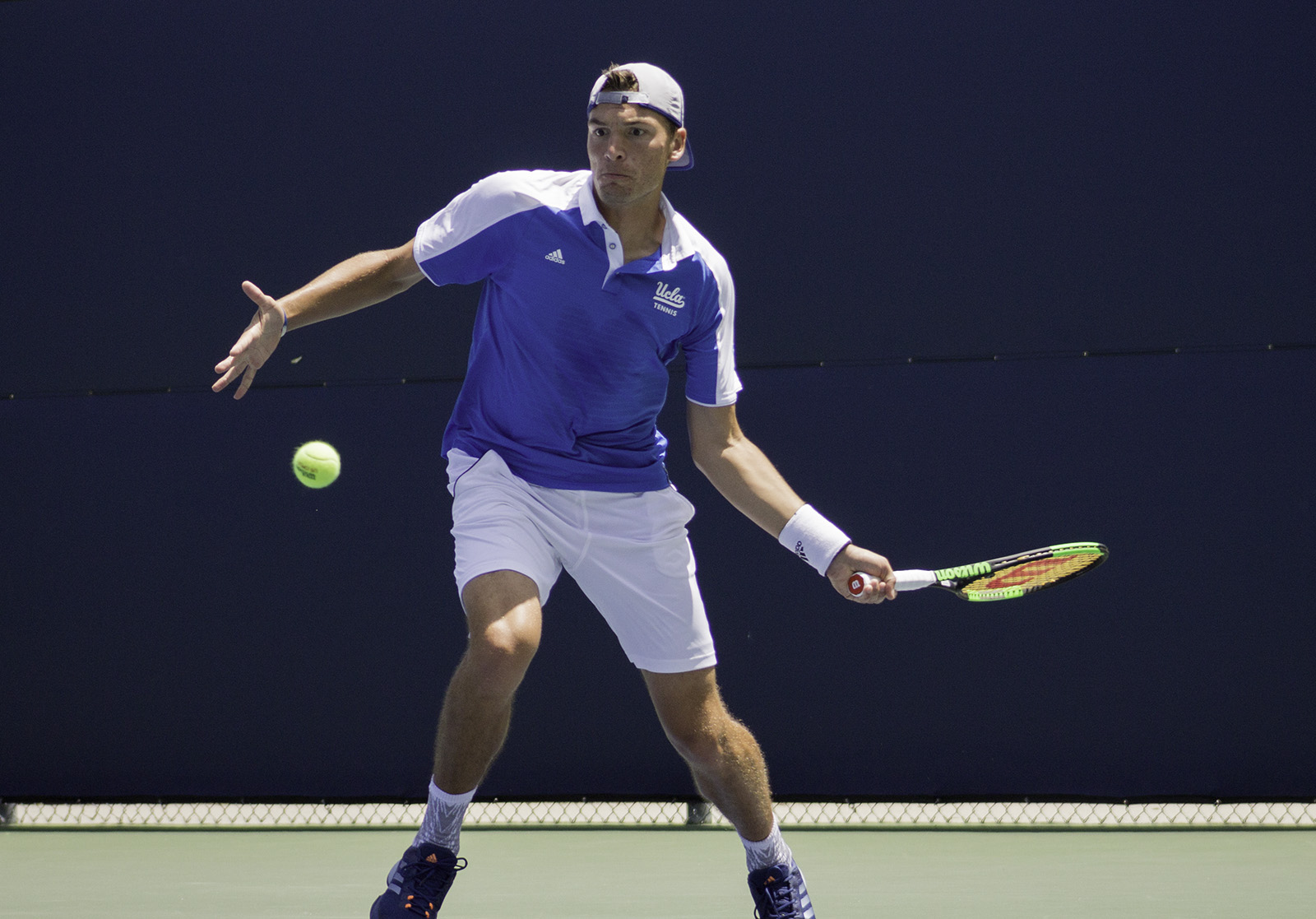 Senior Martin Redlicki fought to the final round of the ITA Men’s All-American Championships, eventually falling to Will Blumberg from the University of North Carolina. (Emma Skinner/Daily Bruin)

Three brand new Bruins were able to get their first collegiate match out of the way this weekend.

Three Bruins also made their collegiate debuts at the UC Santa Barbara Classic as redshirt freshman Connor Rapp and true freshmen Keegan Smith and Bryce Pereira played both singles and doubles in the tournament.

Redlicki, as the 9-16 seed, upset Florida’s Alfredo Perez, Wake Forest’s Petros Chrysochos and Oregon’s Thomas Laurent without dropping a single set the entire tournament, cementing himself a spot in the finals. Ultimately he lost 6-4, 6-4 against North Carolina’s Will Blumberg in the finals of the ITA Men’s All-American Championships.

“I came in with an open mind that I had the ability to do well,” Redlicki said. “I was trying to utilize a big first serve and big forehand. I stayed really aggressive and put pressure on my opponent every game.”

Coach Billy Martin said he thought that Redlicki proved himself as a top player in the nation after this tournament.

“I think it’s obvious that his preseason ranking at 24 is certainly valid,” Martin said. “He has shown and proven after this tournament that he is one of the top collegiate players in the nation.”

UCLA featured three freshman debuts who offered mixed results at Santa Barbara. Pereira lost 6-3, 6-2 in the first round against Fresno State’s Cem Erturk, but he cruised to the doubles semifinals with fellow rookie Smith in the tournament.

Connor Rapp and Smith also had successful debuts at the singles tournament, with Rapp beating his first-round opponent Karl Enander 6-2,6-1 and Smith making his way into the quarterfinals. Rapp felt that his serve had a big effect on his success in the tournament.

“I think I served really well,” Rapp said. “I don’t think I got broken once.”

Smith said this tournament is a place to improve come regular season in terms of conditioning and experience.

“I was a little nervous before my first match but after winning, I felt better,” Smith said. “It was definitely physically demanding and I’m hoping to work and get physically stronger and quicker on the court.”

Martin saw many positives in the freshman debuts and was particularly impressed by their doubles performances.

“I always anticipated they would be a little bit nervous,” said Martin. “It offered good things to think about before the regular season starts in a few months.”

In the SDSU tournament, Goldberg and Austin Rapp took part in a pair of victories. Rapp was crowned the champion, beating USD’s August Holmgren 7-6, 4-6, 6-2 in the finals, and the duo won the doubles championships as well, beating SDSU’s Sander Gjoels-Andersen and Nicholas Mitchell 7-5. Staggs, who participated with Redlicki in the ITA Championships, was knocked out in the first round 6-4, 6-4.

“I felt they all did a good job and did well. It offered good things to think about before the regular season starts in a few months,” Martin said.