Exploring other routes may benefit pre-meds unsure about medical school 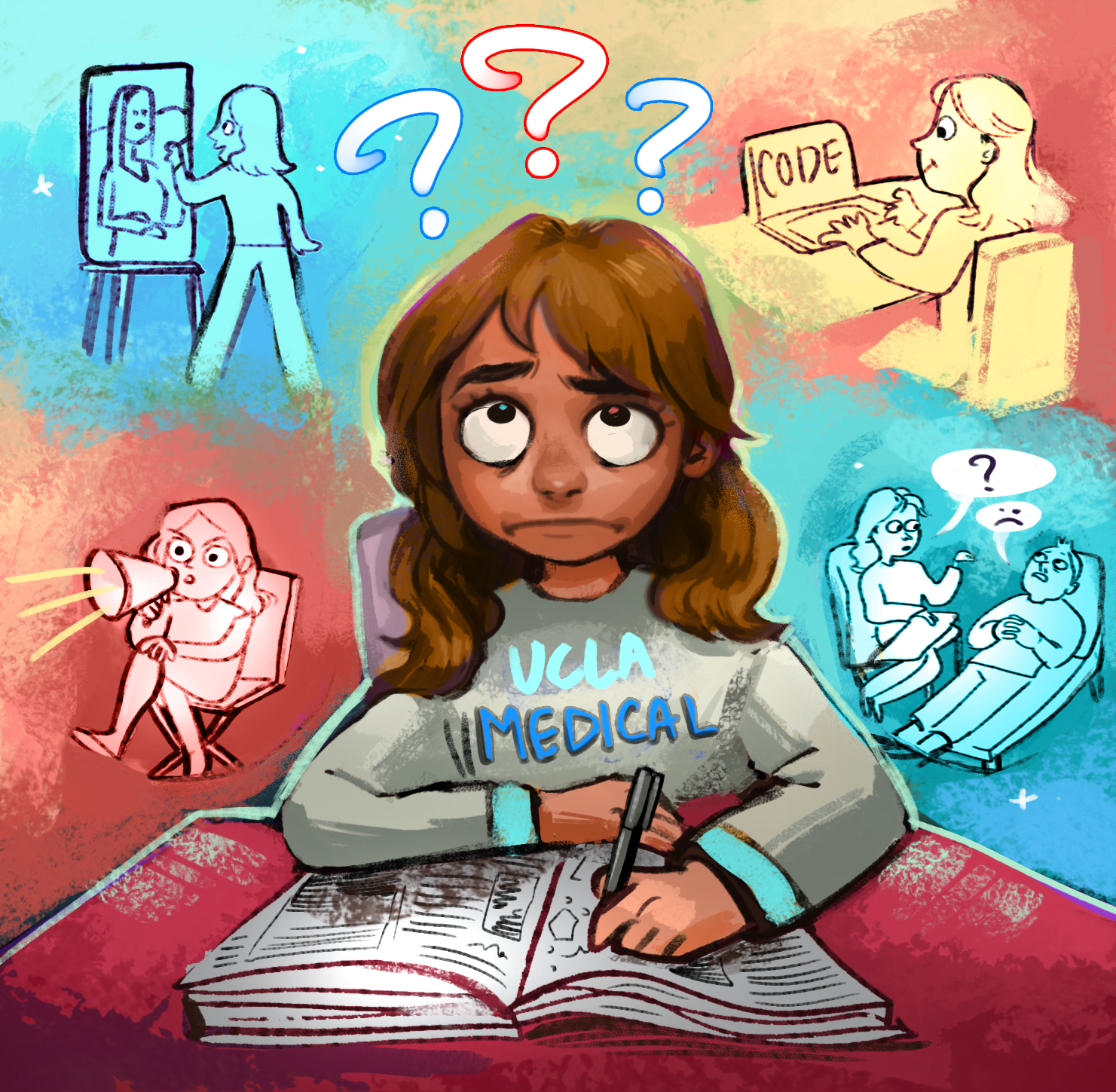 As fall rolls in each year, many premedical students and alumni must quickly learn to balance both their academic and nonacademic commitments with medical school applications.

While some pre-med students never waver in their decision to pursue medicine, others lose interest before ever applying to medical school because of the stress, lifestyle and time commitment required for a medical career, and instead explore options in other careers and fields.

Students interested in becoming physicians must complete many steps before applying to medical school, including taking prerequisite science and humanities courses. To be competitive, most need to maintain a high GPA and score well on the Medical College Admission Test, a 7.5-hour standardized multiple-choice exam that tests applicants’ reasoning skills and mastery of scientific concepts.

In part to alleviate some of the stress pre-med students face, UCLA has recently restructured the curriculum in some life sciences and physics classes.

Debra Pires, an academic administrator who has taught both the old and new Life Sciences Core Curriculum, said new LS courses no longer grade on a curve and now emphasize logical problem-solving.

“We are trying to help students recognize their own potential and to be self-competitive,” she said.

Pires added there is no formula students must follow in order to get into medical school, since every applicant’s experience is different.

“It really is about being the best that you can possibly be and making sure that the decision you are making is really well-informed,” she said. “We have lots of resources at UCLA for students to be able to do that.”

In addition to performing well academically, many pre-med students and applicants conduct research, volunteer and participate in various organizations. Because of the time commitments these extracurriculars require, students often take gap years after completing their undergraduate degrees to accrue experience and strengthen their resumes before applying.

For Tra-Mi Bao, a third-year human biology and society student, shadowing doctors and volunteering in various health care-related organizations, such as Vietnamese Community Health at UCLA and OPICA Adult Day Care Services, have strengthened her desire to become a doctor. She plans to take a gap year to do research, enroll in a postbaccalaureate program or study abroad before applying to medical school.

“Being a premedical and also a medical student, resident and fellow takes a lot of years out of your life,” Bao said. “If students can make that part of their life without hindering their life, then (pursuing medicine) is worth it.”

[Related: Caring for the Caregivers]

However, some students who entered UCLA aspiring to go to medical school ultimately decide to change career paths after realizing they have other interests or want to live a different lifestyle.

For example, Hazel Clorina, a fourth-year English student, realized in her first year studying physiological science that she was only pursuing medicine because of pressure from her family.

“I wanted to be happy while I was in school, not just stressed and miserable,” she said. “I would rather be stressed doing something I loved or something I was passionate about.”

Now an aspiring screenwriter, Clorina said she thinks exploring other options in school helped her to switch out of the pre-med track in her second year. She realized she loved writing, and taking film classes later on at UCLA inspired her to pick up a film minor and pursue work in the film industry.

“If you already know from the start that being (pre-med) is something you want to do in the future, you should definitely go for it,” she said. “But if you are doing it for family expectations and things like that, then it really does help to explore other classes to find what you are passionate about.”

Nick Shea, a spring 2017 graduate, took longer to switch out of the pre-med track. As a student studying psychobiology, Shea said he joined hospital volunteering groups throughout his time in college, but he also explored business opportunities in the health sector.

“In my freshman year, I ended up joining a couple of business groups,” he said. “That was the point where I veered off the traditional premedical track.”

He said he ultimately decided to stop pursuing medicine because he was more of a quantitative problem solver and could not see himself spending the entirety of his 20s in school. Additionally, he had other healthcare-related interests, specifically in pharmaceutical consulting.

“Being a physician is very gratifying and you can connect with patients firsthand,” Shea said. “(However,) I can still make a different kind of impact.”

Shea added his psychobiology background has helped him as an associate at a consulting firm that works in the life sciences.

Although he was originally set on going to medical school, Shea said he realized there are many different options to pursue in life.

“It is okay to be in the sciences and realize later on that you do not want to be pre-med,” he said. “A lot of companies and industries in general are just looking for smart people – my path is more common than people think.”