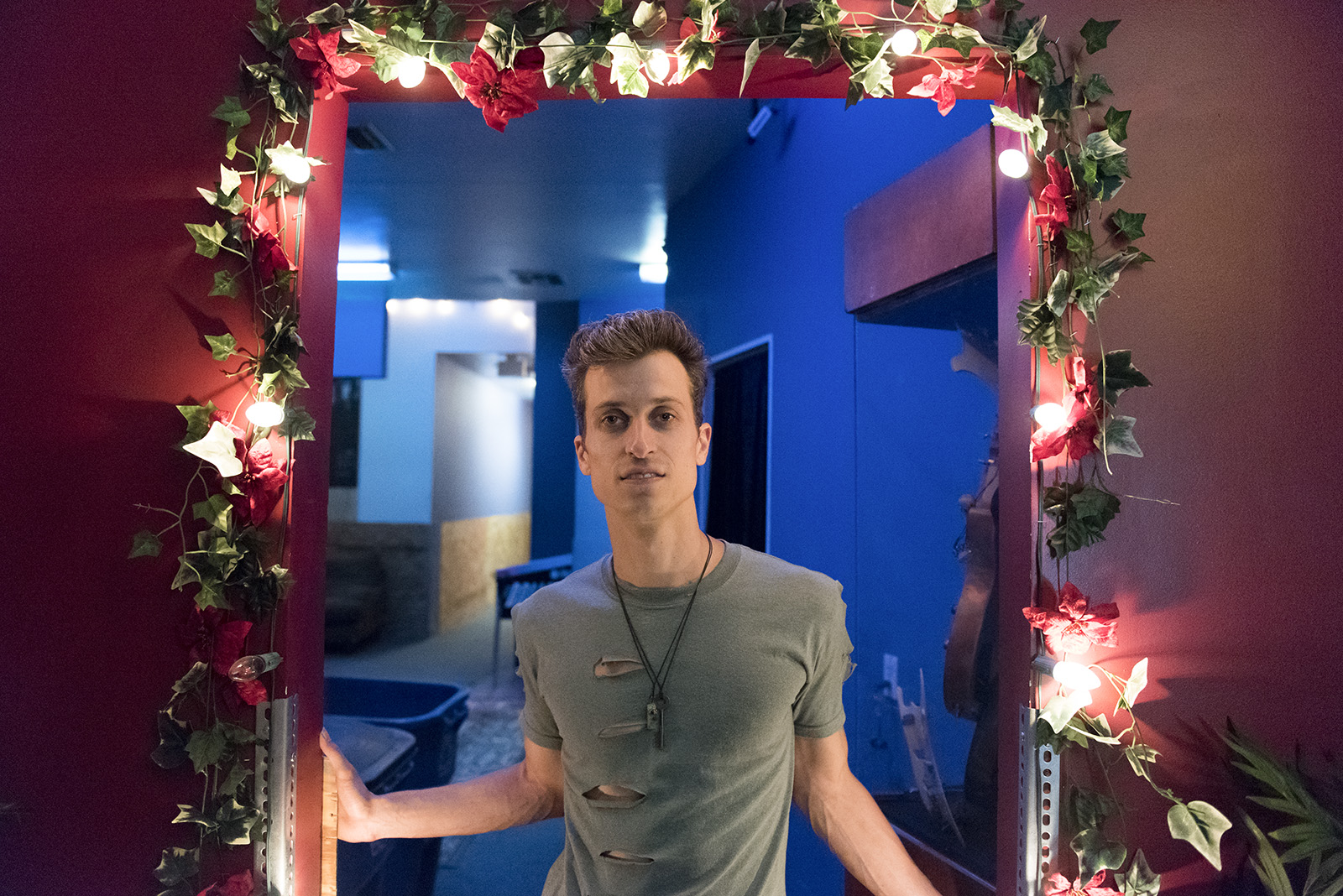 Bryce Lamar has adopted a more free-flowing approach to his creative process, recently taking up painting as a way to reflect the emotions in his music. (Axel Lopez/Daily Bruin)

Bryce Lamar painted strokes of blue and grey onto a sheet of poster board, smearing the paint around with different brushes to create various textures on the artwork.

The UCLA Herb Alpert School of Music alumnus said he felt the free-flowing, water-like textures and colors of the final product fit with the musical aesthetic of his newly released single, “For Real.”

“It wasn’t deliberate,” Lamar said. “It kind of just felt right. When I look at it, it just kind of reflects the song somehow.”

Lamar’s single, “For Real,” was released Friday with his own dark blue artwork accompanying the single as its album art. Although an experienced musician, Lamar said he has only recently begun painting and is producing a series of singles with original visual art to accompany each one.

While attending the Burning Man festival last year, Lamar met Mercan Dede, a Montreal-based visual and musical artist, who encouraged Lamar to work on his visual artistry, despite Lamar’s lack of experience in painting.

“We connected in sort of a strange way,” Lamar said. “Something he helped me realize was that I can create from a whole different place of consciousness and that when I do that, it allows the piece of art or music … to come out more freely.”

For example, Lamar said he tries to let the paint guide his mind while working on a new piece and to not judge his own creation in the process of creating it. In an earlier single, “Perfect,” Lamar created a bright red paint splotch across a white background to accompany the song.

Lamar said he took a very formulaic approach to creating his music at the start of his career, focusing on making perfect, carefully organized songs. But on “For Real” and the music and art he plans on releasing after it, he said he took a more free-flowing and nonjudgmental approach to making the music.

“Rather than deciding first, ‘I like this color and then I’m going to do this little border and I’m going to plan out this,’ I just take my mind out of thinking and just experience the moment,” Lamar said.

Dede said that Lamar’s music and visual art reflect Lamar’s experience in each piece – because Lamar has a strong background in creating music, it has a complex and multidimensional quality. On the other hand, Lamar is still in the beginning stages of producing visual art, lending it a simpler, more abstract quality, Dede said.

“For me, when I look at those visuals, they make me focus on the music,” Dede said. “They’re more abstract (in) form … so when you look at that, what happens is you don’t pay that much attention to the visuals but you start to understand his art by the voice and sounds he created.”

Lamar said he practices meditation and Buddhist chanting to tap into the level of consciousness needed to produce his art. He met music producer Rik Dobson at a Buddhist chanting meeting, and Dobson said the pair became friends after sharing their music with each other. The two now share a recording studio in Echo Park and run a record label called Namkyo together.

“The music we make is really just a reflection of where we are inside and where we are in our own lives,” Dobson said. “Seeing the person that Bryce has become and the positive changes he’s made, I see that more and more reflected in his music.”

As someone who likes to connect visuals to the musical experience, Dobson said he appreciates Lamar’s efforts to accompany his music with original paintings because it adds an extra dimension of emotion to the music.

Lamar said both the art and the music of his current series showcase a new quality to his music – a more electronic sound resulting from his recent attraction to mixing music and focusing more on the production value.

“(‘For Real’) in particular is really a reflection of the change that I’m sort of undergoing in terms of my creative process and just who I am as a person,” Lamar said. “It’s basically turning a whole new page.”