Battle of the Editors: UCLA’s most valuable coaches 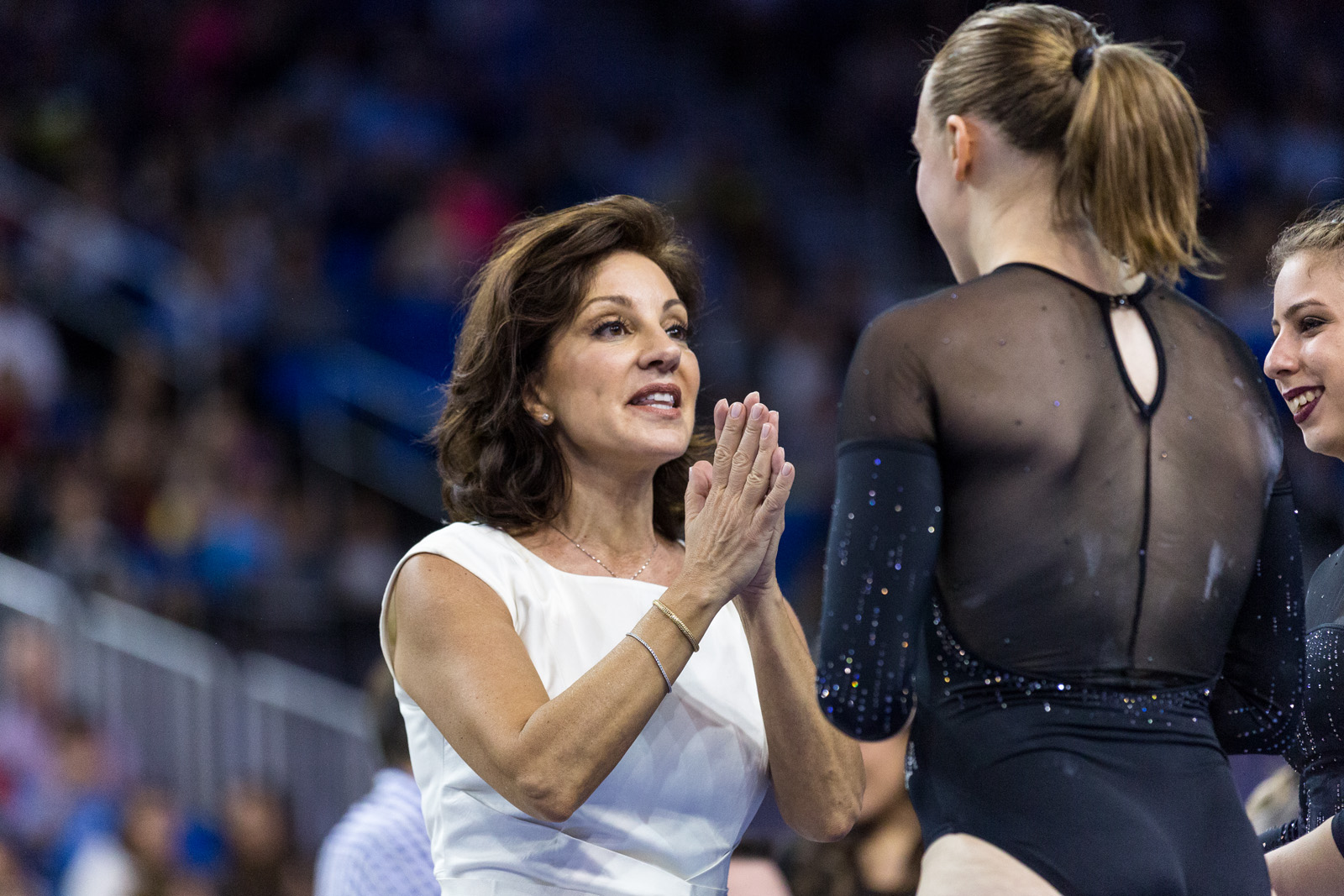 Coach Valorie Kondos Field is one of the most accomplished coaches at UCLA with six NCAA titles on her resume. (Angie Wang/Daily Bruin senior staff)

By TuAnh Dam and Michael Hull

The numbers are crunched and the awards are listed, but now it’s time to see who the Daily Bruin Sports editors think are UCLA’s most valuable coaches. From gymnastics to men’s tennis, these are the best of the best coaches in Westwood.

I’m hanging up my editor hat for this “best coaches” piece as I write about two of the best coaches I’ve worked with at UCLA: Valorie Kondos Field and Adam Wright.

Olympians, national championships and accolades aside, Kondos Field is one of the best because of what she does for the people around her, including me.

It was the little nods of encouragement she gave as I bumbled my way through my first gymnastics stories, the patience she had as I tried to think of questions and the subtle wink during nationals as I mustered up the courage to talk in front of other reporters.

Those little gestures meant a lot and helped me build confidence in not only my writing but also myself.

Wright did the same – he gave me a chance to work with his team and staff even though I had zero water polo knowledge.

Nothing means more to a unsure and confused college student than someone believing in them and what they can bring to the team – and both Kondos Field and Wright did that for me.

Coaches take chances on the athletes they bring to campus, but they also take the time to building and fostering relationships with us – nothing’s more valuable than that.

And eight national championships between the two of them doesn’t hurt either.

I’ve been writing about the head coaches at UCLA all week, so I’ll turn a gaze towards the assistant coaching scene at UCLA.

Frazier’s technically a head coach – he’s the men’s coach for track and field – but he does more on the day-to-day with the throwing team. As a throws coach, he has produced 43 all-Americans over the course of his coaching career, according to UCLA Athletics – one more than Valorie Kondos Field’s UCLA total.

Last year, his entire men’s throws team, led by Olympian Nicholas Scarvelis, qualified in the shot put for NCAA Indoor Championship, and this year redshirt sophomore thrower Dotun Ogundeji has the fifth-farthest mark in the nation. All three of his women’s shot putters made the NCAA West Regional, and both on his current roster are back this year.

And when it comes to recruiting, Frazier gets some of the best throwers in the country to come add to UCLA’s already stellar throwing legacy.

Freshman Nate Esparza finished in the top five at the California Interscholastic Federation Championships in both shot put and discus, and is currently in the top 25 in the nation in the shot put as a first-year. Next year, the top women’s throws recruit and national record-holder Alyssa Wilson is headed to Westwood.

There could be a catch with this non-head coach qualification though – with director Mike Maynard stepping down after 2017, Frazier might not be just the men’s coach for much longer.