Tanner’s Take: Maybe champions are really made in Palo Alto 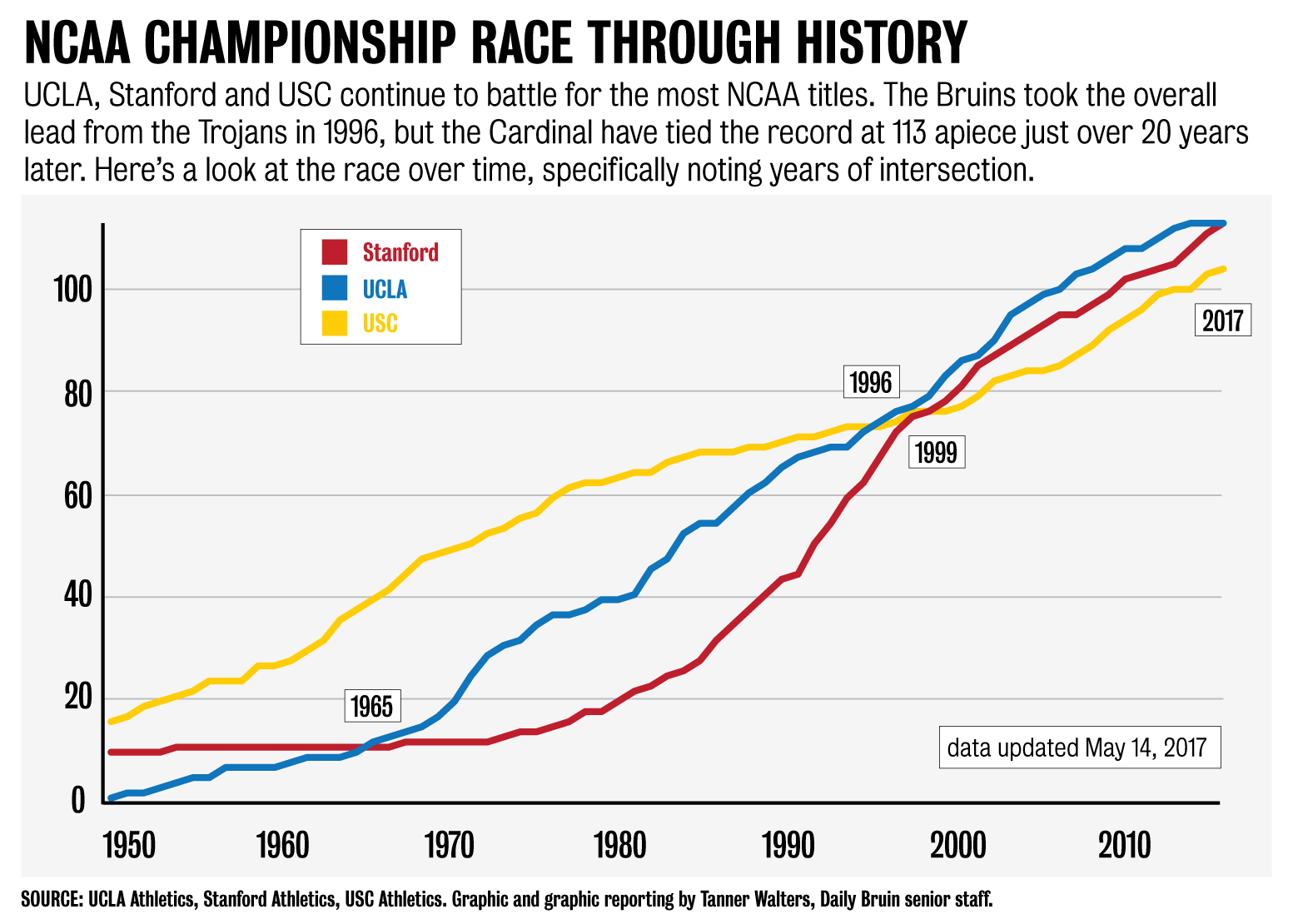 The UCLA Athletics marketing department has a challenge ahead.

For 21 years, every piece of promotional material – even the athletics home page until Monday – proudly touted the Bruins’ place atop the collegiate world with the most NCAA championships in history.

Those days are very nearly over.

A recent dry spell of only five national championships over as many years left the doors open for Stanford to come in and snag partial ownership of that coveted title. While the Cardinal conquest isn’t complete – the Pac-12 schools are now locked at 113 championships – the momentum is certainly not in Westwood.

The Bruins have held the distinction of ultimate NCAA champion since 1996, when they overtook the USC Trojans for the first time in the rival programs’ histories.

The power appears to be shifting again, and UCLA fans should be asking themselves a key question: Are champions really made here?

Let’s start with some perspective: 113 national championships is an incredible historical feat. Five titles since 2012 is also nothing to frown at, but when Stanford tallied 11 in that same span – all in sports UCLA also competes in – it might be time for a bit of an evaluation.

For far too long, any criticism after an all-too-common UCLA letdown could be shut down by a quick response that, hey, at least the Bruins had the most national championships. It was the ultimate fallback.

But the women’s water polo team’s loss to Stanford over the weekend continued a trend of recent disappointments that put UCLA in this position.

Coach Brandon Brooks’ program alone has fallen to the Cardinal in each of its past three trips to the championship match.

If Brooks’ squad had won two of those three, the national championship race would stand at a comfortable 115-111 margin and this column likely wouldn’t be written until 2020. But here we are. And it’s time for UCLA Athletics to take a serious look internally to figure out what needs to change going forward.

Pointing to cases of trophies from decades past is simply an attempt to distract fans with shiny objects. It’s a feel-good tactic that masks the mediocrity of an athletic department that hasn’t figured out how to win recently.

Winning isn’t everything. I get that. But most Bruin coaches have higher salaries than my professors. Donors are pouring millions of dollars into new buildings and fancy amenities for a tiny subset of the student body. Many students themselves are paying hundreds of dollars to support the high-profile teams.

It’s frustrating not to get a return on that investment, especially when the university and the athletic department collectively lack a sense of urgency. There’s more competition in college athletics these days, so nobody should expect programs to win at the pace they did in the last century. But Stanford has clearly adjusted and adapted.

How about a renewed commitment to turning failing programs around? Or should we continue to pretend UCLA track and field wasn’t a perennial powerhouse back in the day?

The past five years, specifically, have seen programs like men’s soccer bring in a revolving door of stellar recruiting classes, only to deliver disappointingly mediocre finishes time and time again. History is a selling point for recruits – and ticket-paying fans – until it isn’t.

The criticism doesn’t fall on one person, or program, alone. There’s probably a good case to make that Athletic Director Dan Guerrero is the problem. There’s just as good of an argument that, above all, this goes back to the players and coaches themselves.

Ultimately, it’s an issue the department must address across the board, whether that means taking a hard look at who is coaching UCLA’s teams or at the administrators that are making the decisions.

The marketing department doesn’t have much of a choice but to adapt. I can promise that “No. 2 in national championships” won’t have the same ring. But in the end the real challenge isn’t going to be for marketing directors working on branding campaigns in the J.D. Morgan Center.

The wake-up call will be for coaches, players and administrators who must collectively take the blame for a fall from power – a reality check that no Bruin fan really wanted.

Click here to view a high quality version of the graphic with this story.