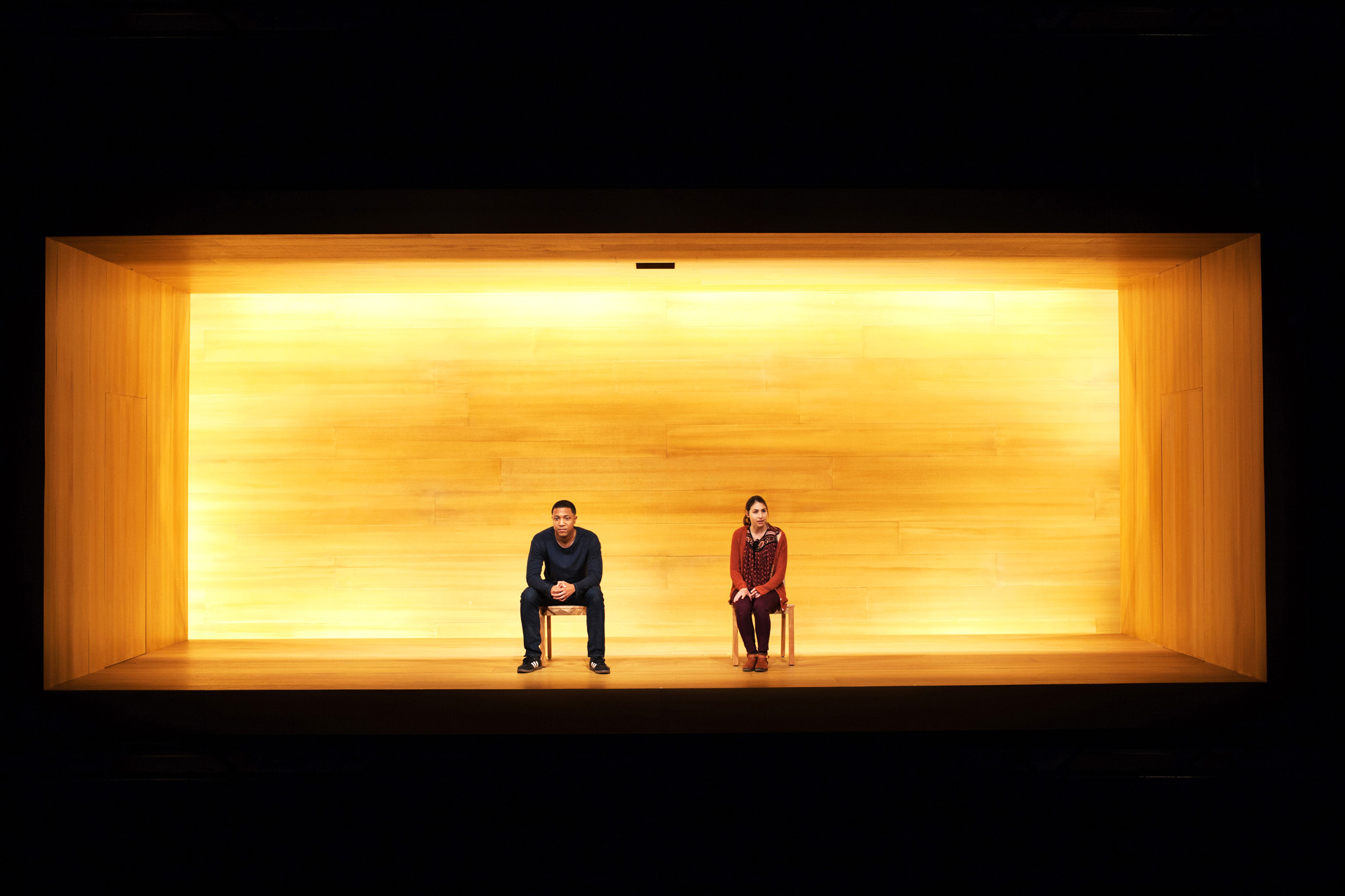 Consent or rape: A play in Westwood implies it isn’t so black and white.

“Actually,” a two-person play at the Geffen Playhouse, realistically depicts modern hookup culture and the difficulties of defining consent; it shows two sides of an often ambiguous situation.

The play compels active thought and emotional engagement with the story of two Princeton University freshmen and their experiences after having sex while drunk.

The play blends humor with the serious subject matter, providing a fresh take on the complexities of consent. It innovatively involves the audience by switching between a more traditional scene-based narrative with dialogue and direct addresses to the audience. The characters tell their stories and the events framing the more traditionally styled scenes.

The play opens with Amber (Samantha Ressler) and Tom (Jerry MacKinnon) sitting on wooden chairs in a wood-paneled room. The show has no other set pieces to give context. Only a muted pounding of house music in the background hints that they are at a party.

Dialogue between the two characters quickly includes the audience – the scene shifts, indicated by the lights changing from blue to orange. An abrupt quietness accompanies the characters’ synchronized turn toward the audience. Tom and Amber directly tell the audience what happened after the party – a rape allegation as seen from two sides.

The transitions between the party and the present-day retelling of its effects happen every few scenes, but the play does not depict much of the party. Rather, most of the play consists of Amber or Tom describing the night, their lives, their relationship and the Title IX hearing.

The masterful scene-switching style prohibits mindless absorption and instead incites opinions about the characters and their possible guilt, which writer Anna Ziegler makes more difficult by humanizing both characters.

Ziegler’s writing style skillfully excludes the audience from the scene of the alleged crime, but allows the characters to make direct appeals to the crowd, compelling audience members to engage with the subjective story and make inferences. The ambiguity of the scenes also creates doubts about the characters’ trustworthiness and what actually happened that night.

Even when actively rejecting the notion that women falsely accuse men of rape, viewers can find it difficult to believe Amber. The chatty character speaks in a tone of voice that does not outwardly seem to recognize the seriousness of the accusation.

She talks about telling a friend that Tom “practically raped her” because he was rough during sex. Her friend calls their resident assistant, and it seems as if Amber was peer pressured into formalizing the accusation of rape.

As the play progresses into the Title IX hearing, viewers become more sympathetic of Amber.

Beliefs about Tom undergo the process in reverse – surprisingly eliciting sympathy at first. The script’s complexity is the source of the show’s resonance with viewers.

Tom speaks about his love and respect for his mother, who raised him alone and helped him get into college by supporting him. Tom’s tearful performance coupled with Amber’s portrayed untrustworthiness initially seems to establish Tom’s innocence.

Refreshingly, the narrative doesn’t automatically paint Tom, a black man, as guilty. But that would mean that Amber is to blame for falsely accusing Tom, which at first seems to perpetuate the notion that women falsely accuse men of rape.

The play also portrays the intersectionality of race and gender during humorous moments in the show. At the start, Amber and Tom talk about getting into Princeton University, and she mentions he only had to compete among the pool of black applicants. He responds that her words aren’t a microaggression because they’re a macroaggression.

The characters’ overt recognition of each other’s culturally ingrained racism and sexism adds another layer to the play. The audience questions their own preconceived notions about stereotypes or if there is even one objective truth about what constitutes consent.

As Tom and Amber make eye contact with viewers and tell their stories, the audience becomes not only Amber and Tom’s confidantes but also a metaphorical jury.

The play seems to ask for a declaration of who is at fault while raising questions of whether a black man can get a fair trial and whether the audience can trust the characters’ words.

The actors’ believable performances question whether viewers’ opinions about the characters are truly objective or if those opinions come from culturally ingrained prejudices. The play thus shows the relativity of believed truth.