On the Rise: Grey 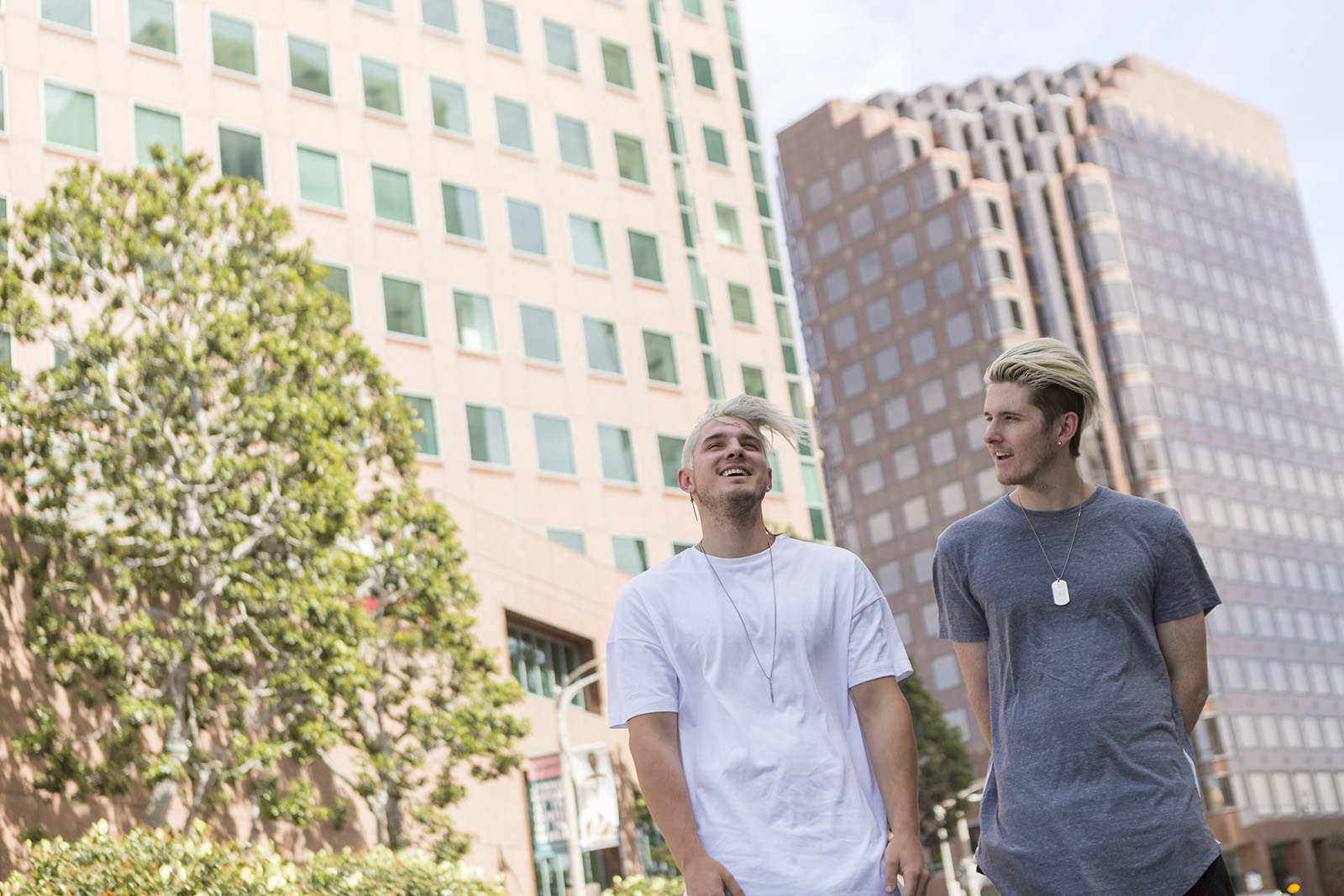 Brothers Michael and Kyle Trewartha produce music together under the name “Grey.” They created the single “Starving” with Hailee Steinfeld and Zedd last year and will be performing at the Avalon in Hollywood on Friday. (Anisha Joshi/Daily Bruin)

Michael Trewartha worked a day job at an Olive Garden in Laguna Hills, California, when a friend casually gave his brother and him an email address that supposedly belonged to music producer Skrillex.

Both Michael and his older brother, Kyle Trewartha, had just begun making music together under the project name “Grey,” and their friend suggested they submit a song if they ever had something solid to share.

“We were like, (there’s) no way this is Skrillex’s email,” Michael said.

Skepticism aside, Kyle, 25, sent a remix of Jack Ü and Justin Bieber’s “Where Are Ü Now,” but he wrote in the email that it was just his brother’s song.

“I lied when I sent it because I didn’t want to self-promote,” Kyle said.

In the time it took Michael, 22, to drive from Santa Monica to Laguna Hills for his shift at Olive Garden, they received a reply.

“I went on my lunch break and (Kyle) called and said, ‘Dude, you can’t tell anyone about this right now, but Skrillex replied,'” Michael said. “‘This is real, quit your job.'”

Impressed with their work, Skrillex connected the brothers with Zedd, who later collaborated with them to produce the single-turned-platinum-hit “Starving” with Hailee Steinfeld in 2016.

Since then, the brothers released the single “I Miss You” featuring girl group Bahari, and began playing live this year – they’ll perform at an electronic dance music show at the Avalon in Hollywood on Friday.

“Starving” peaked at No. 12 on Billboard’s The Hot 100 chart and garnered Grey a global audience, but Kyle and Michael Trewartha had begun their ventures into music years before producing the single.

Both Trewarthas performed in drum line and in amateur bands while attending Fountain Valley High School in their hometown of Huntington Beach, California. Their early influences were rockers like Radiohead and Dream Theater, but after they started attending festivals like Hard Summer Music Festival and Electric Daisy Carnival, they shifted focus toward electronic dance music, Kyle said.

After attending San Francisco State University for about two years, Kyle launched a solo stint as Singularity, which he took to EDC first in 2012 as part of Insomniac’s Discovery Project for rising producers.

Meanwhile, Michael sold hats, beanies and sweaters with a clothing brand he launched called Avisé – a French word for “aware.”

The melodic dubstep Kyle was creating as Singularity started to feel stale, so he created another solo project called “Kyle Tree,” but it never fully got off the ground, he said.

“I realized that I had kind of plateaued,” Kyle said.

Grey was then born out of hair dye and a couple collaborative remixes.

The moniker emerged when Kyle colored his hair to match his brother’s silvery shade, and the two began remixing out of their home studio in Santa Monica.

Skrillex had asked for more music from the brothers when he replied to their email in 2015, so they sent their remix of Zedd’s “Beautiful Now” – one of the only other remixes they had at that point, Kyle said. Skrillex forwarded the remix to Zedd’s manager, who invited Kyle to meet at Interscope Records’ office in Santa Monica the next day.

“That was on a Saturday, so no one was there – he opened the building just for me,” Kyle said.

After a meeting with managers and FaceTiming with Zedd, the brothers were commissioned to remix a few more of the Russian-born DJ’s songs. Then they tackled their own singles, including “Starving,” after their newfound industry contacts helped bring Steinfeld into the mix.

“Everything’s a lot more legitimized now,” Michael said. “It feels a lot more like a business and less like just a for-fun type thing.”

In March, Grey opened for Zedd on South Padre Island in Texas for the Ultimate Music Experience 2017. The show – the duo’s first live performance as Grey – sidetracked when Kyle accidentally tuned his guitar down an octave, which turned the string into a flimsy noodle, he said. He left the stage to fix the problem – leaving his brother alone in front of the crowd of thousands for the second song.

“I’d never played a show in my life before that,” Michael said.

But what hasn’t changed is their sibling dynamic – the two currently live in a house together in Hollywood Hills, sharing their home with two other music producers.

“It’s really easy to work,” Michael said. “I walk two steps and then we’re in the studio.”

Tom Norris, Grey’s mastering engineer and roommate, said he met Kyle after the brother sent him a message on Reddit complimenting some of his tracks.

Norris said he began working with the Trewarthas just as they were starting Grey. He and the Trewarthas do most of their producing from home – which has worked out just fine for all of them.

“I’ve always been used to having a bed in my studio, and when I go to a pro recording studio I feel like I’m going to the doctor’s office or something,” Norris said.

Norris, who has also worked with musicians Ansel Elgort and Liam Payne, said the Trewarthas’ music stands out to him for its conscientious composition and creative chord progressions.

“I don’t have to go across the whole production and put Band-Aids on everything,” Norris said.

When the brothers were first starting out, they felt they were walking on eggshells trying to prove themselves to producers and labels. Now that Grey is planning to release a five-song EP in about a month, Kyle said the project has secured enough of a following to stick around even if not every song is perfect.

“The thing we just haphazardly threw together worked out,” Kyle said.