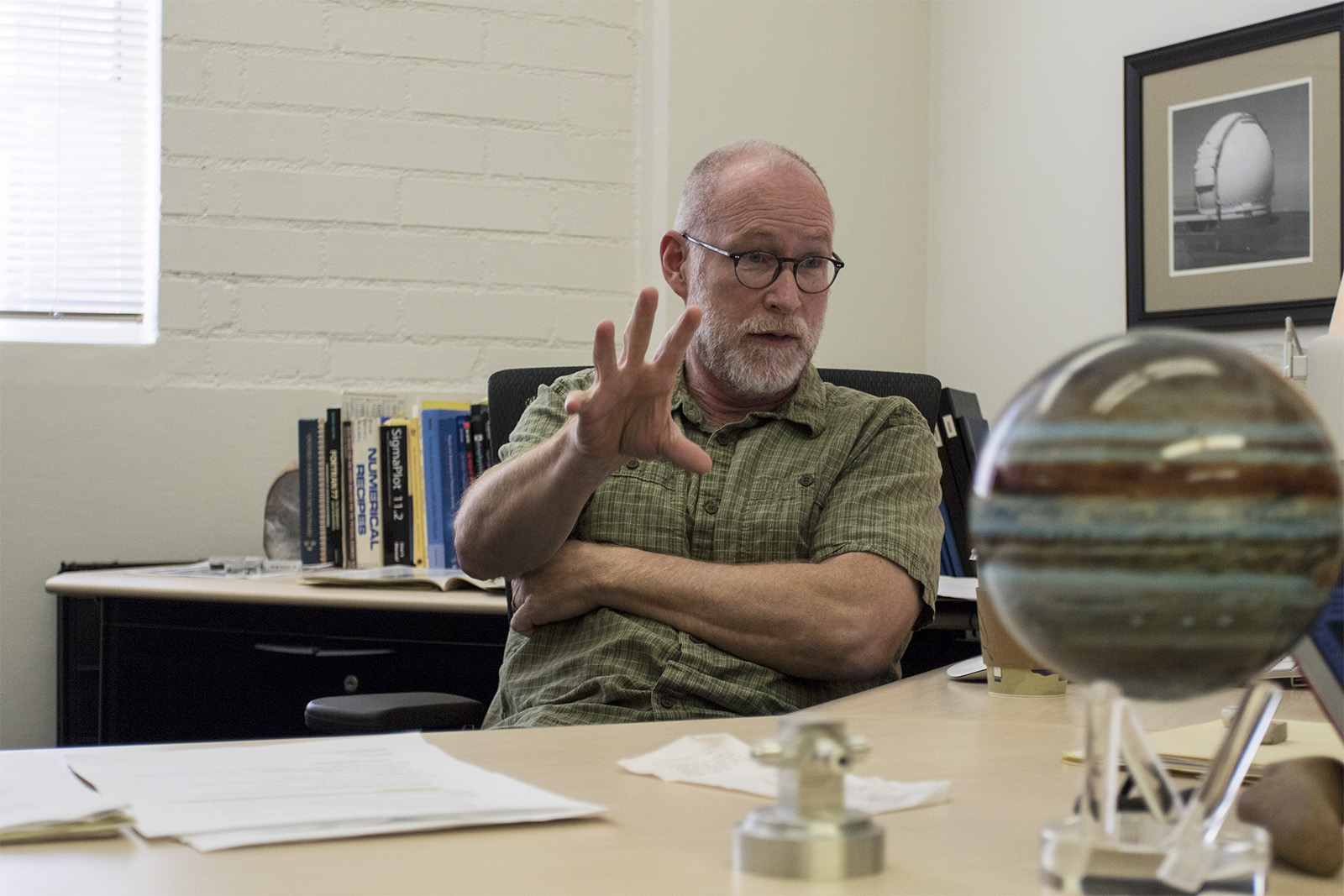 Edward Young, a professor of earth, planetary and space sciences, was principal investigator of an interdisciplinary research team that found that the ratio of heavy and light silicon isotopes in space does not align with existing theories of the early universe. (Wesley Hardin/Daily Bruin)

UCLA researchers discovered that heavy elements do not necessarily concentrate where the universe ages the most, contrary to a long-held scientific theory.

An interdisciplinary research team at UCLA found that the ratios between heavier and lighter silicon isotopes are almost constant at different locations in the Milky Way, in contrast to established theories which state that heavier isotopes are more abundant at the galactic center. The team published an article about their findings on April 24 in The Astrophysical Journal.

According to the Big Bang theory, elements with low mass, such as hydrogen and helium, were the first elements in the universe, and heavier elements are formed later through nuclear fusion in stars, said Edward Young, the principal investigator and an earth, planetary and space sciences professor.

“Therefore, there should be heavier elements where more nuclear fusion has occurred, namely the center of a galaxy, where more stars are born and die,” said Nathaniel Monson, a graduate student researcher in the earth, planetary, and space sciences department.

Previous research also found that heavier isotopes of elements such as oxygen and carbon are more abundant in the galactic center, Young said.

Researchers tested this theory by examining the distribution of different isotopes of an element across the galaxy, Young said. Isotopes are atoms of a chemical element which differ in weight because they have a different number of neutrons.

For the study, researchers investigated the distribution of three stable silicon isotopes: Si-28, the most common isotope, and Si-29 and Si-30, which are relatively rare, Monson said.

Researchers captured the radio signals emitted by silicon monoxide molecules at different locations in the Milky Way with a telescope, Monson said. They then identified which silicon isotopes the molecules contain by studying the shape of the radio waves.

Monson said they wanted to examine if the ratio between heavier and lighter isotopes is higher when they are closer to the galactic center, as is in the case of oxygen and carbon.

Their results show that the ratios between Si-29, Si-28 and Si-30 are relatively constant throughout the Milky Way, which is contrary to researchers’ expectations, he added.

Young said this discovery implies that previous studies of oxygen and carbon isotopes are biased, or silicon isotopes develop in a unique way.

A special type of supernova that transforms heavier silicon isotopes into lighter ones could explain this unique silicon distribution, said Mark Morris, one of the researchers of the study and an astronomy and physics and professor. This type of supernova activity will counteract nuclear fusion in stars, which generates heavier elements over time.

Isotope distribution observation can also be biased because of inaccurate analysis of the radio waves that molecules emit in space, Monson said.

Monson said he used the Green Bank Telescope in West Virginia, the largest fully steerable radio telescope in the world, to collect data for the project.

A telescope with a dish in the shape of a parabola provides the most accurate observation, Monson said.

“The (Green Bank Telescope) is designed in a way that even when it tilts and turns, (the shape) merely changes shape from one parabola to another,” Monson said. “But other telescopes will deviate much further.”

When a molecule emits a photon through space, other molecules absorb the photon and re-emit it, Monson said. This process will distort the shape of the radio waves observers receive.

Researchers who studied oxygen and carbon may have generated inaccurate analysis of isotope distributions because of the distorted radio waves, Monson said. However, he designed a computer model to correct the distortion, making the project’s analysis more reliable.

Monson added this research is more credible because of having studied silicon instead of other elements.

“We chose silicon because we want to use an element that is rare enough so that (the distortion in the radio signal) is manageable but also one that is common enough so that we could find it,” Monson said.

Researchers also chose silicon because it is one of the major components of rocks on Earth, Young said. They wanted to compare the distribution of silicon isotopes in the Milky Way with that of planets in the solar system.

“It is possible that our solar system formed under special circumstances,” Morris said. “But nobody has really characterized how the rest of the galaxy is different.”

Morris said their research showed the solar system has many similarities with other star systems in the Milky Way. But this discovery is merely the first step toward a more profound understanding of the composition of the entire galaxy, he added.

Monson said the next step of the project is applying improved analytical methods to oxygen and carbon isotope distributions to review previous results.

“The lack of gradient of silicon isotopes (across the Milky Way) means something is missing,” Monson said. “But we don’t know what it is yet.”