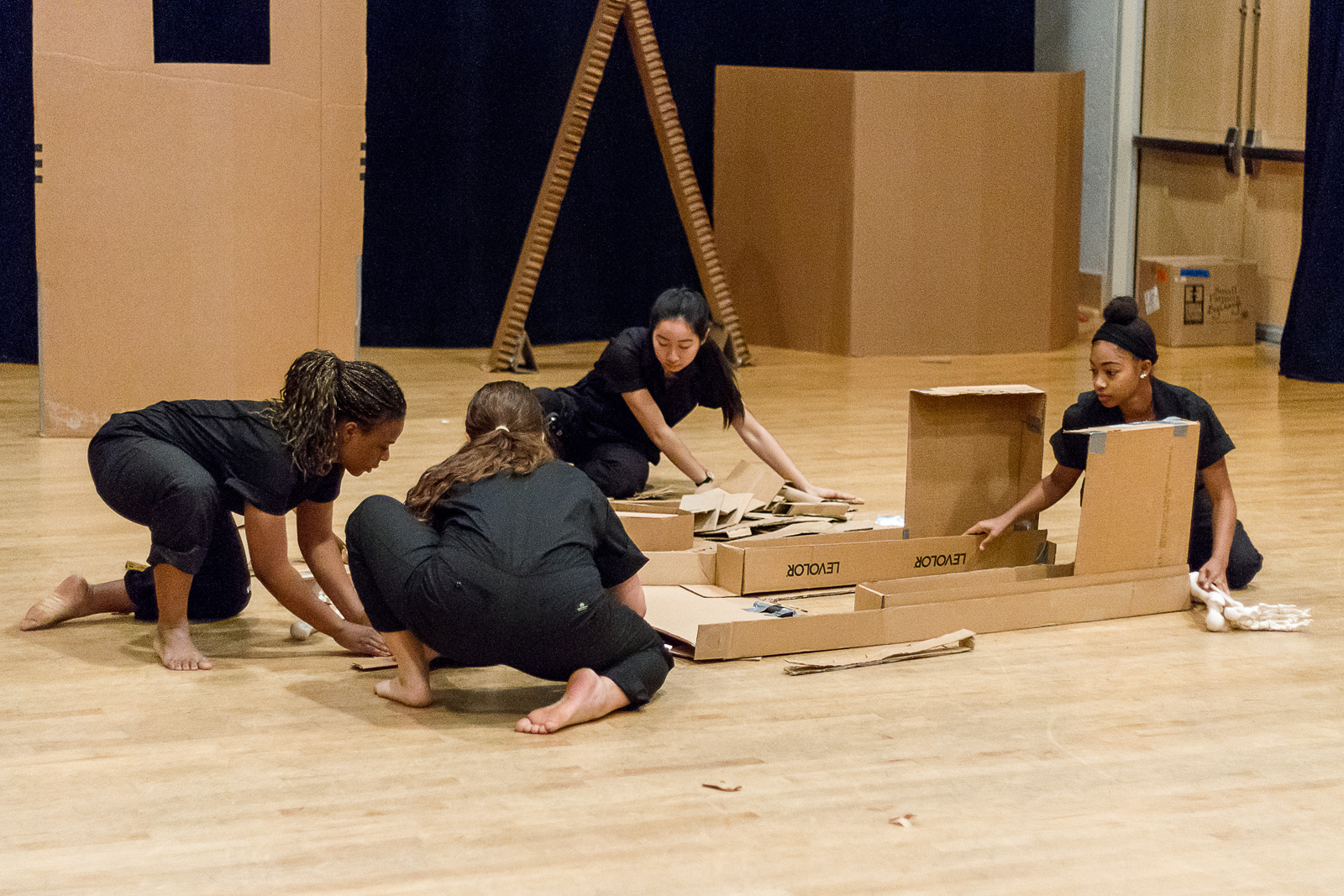 Graduate student Sarah Jacobs will present “Fugit Tempus,” a movement piece as part of the world arts and cultures/dance department’s Upstart Series, at Kaufman Hall on Friday and Saturday. The performance involves themes of construction and features a cardboard set and skeleton model. (Habeba Mostafa/Daily Bruin)

Jacobs’ movement-based performance “Fugit Tempus” is part of the world arts and cultures/dance department’s Upstarts Series. The piece, whose name was inspired by the Latin phrase tempus fugit meaning “time flies,” will be shown Friday and Saturday night in Kaufman Hall. “Fugit Tempus” centers around six dancers and Skelly moving and interacting within an entirely cardboard world.

For Jacobs, a dance graduate student and choreographer, the use of nontraditional objects in “Fugit Tempus” such as cardboard and the skeleton model helps convey themes of construction, deconstruction, anatomy and framing to the viewer. The setup is intended to create an imagistic realm that stretches time and allows the viewers to enter the world of the dancers, she said.

One of the inspirations for Jacobs’ movement piece comes from her past interactions with the theme of tight spaces. Her past compositions for class projects involved dances in closets and boxes. Jacobs noticed that she has been drawn towards working with the room and with objects as much as with – if not more so than – the body.

As for Skelly, another inspiration for “Fugit Tempus” comes from anatomy, something Jacobs has been passionate about for years. She is certified in a somatics practice called body/mind centering, which focuses on learning how to initiate movement from different systems of the body.

Jacobs said she feels especially connected to the skeletal system and wanted to utilize a skeleton in the performance from the beginning. Skelly adds a sort of humor to the performance and plays a role in the tone of “Fugit Tempus,” Jacobs said.

Myia Hubbard, a graduate dance student who is performing in “Fugit Tempus,” was interested in the experimental aspects of the dance piece and its abstract nature. She appreciated the opportunity to be part of a project that encourages creativity.

“I like how you can take a theme … and play with how you can involve other props and ideas,” Hubbard said.

Part of the performance will be created in real time. During the performance, a visual artist onstage will create 80 small drawings on pieces of cardboard, which audience members will get to take home. The aspect adds onto the idea of a two-dimensional image preservation of a three-dimensional moment, Jacobs said.

The constant constructing and deconstructing of the dance piece is captivating, said Courtney Goffney, a second-year world arts and cultures/dance student performing in “Fugit Tempus.”

She said the dancers’ constant moving and interaction with the cardboard will captivate the audience when they watch the dance piece and allow them to enter the world of the dancers. Both Goffney and Jacobs said the dancers exhausted multiple pieces of cardboard throughout the rehearsal process.

Sara Simon, an architecture alumna, met Jacobs when she was a teaching assistant for a class Simon was in and was reconnected with Jacobs when she reached out to Simon to help with constructing the cardboard pieces for the dance piece.

Simon said the challenge in using cardboard was ensuring that the pieces did not fall and cause harm to the dancers. The cardboard, which acts like a cityscape and creates spaces for the dancers to inhabit at times, adds a theme of impermanence to “Fugit Tempus,” she said.

“To me, the set isn’t supposed to be permanent, it’s supposed to have this kind of precariousness to it that it could crumble and fall any second,” Simon said.

For Jacobs, the presence of the cardboard expands on the idea of architecture externally and how it relates to our internal architecture. The different uses of cardboard throughout the dance piece emphasize how construction occurs in different forms, as well as how the dancers’ forms change in relation to the cardboard.