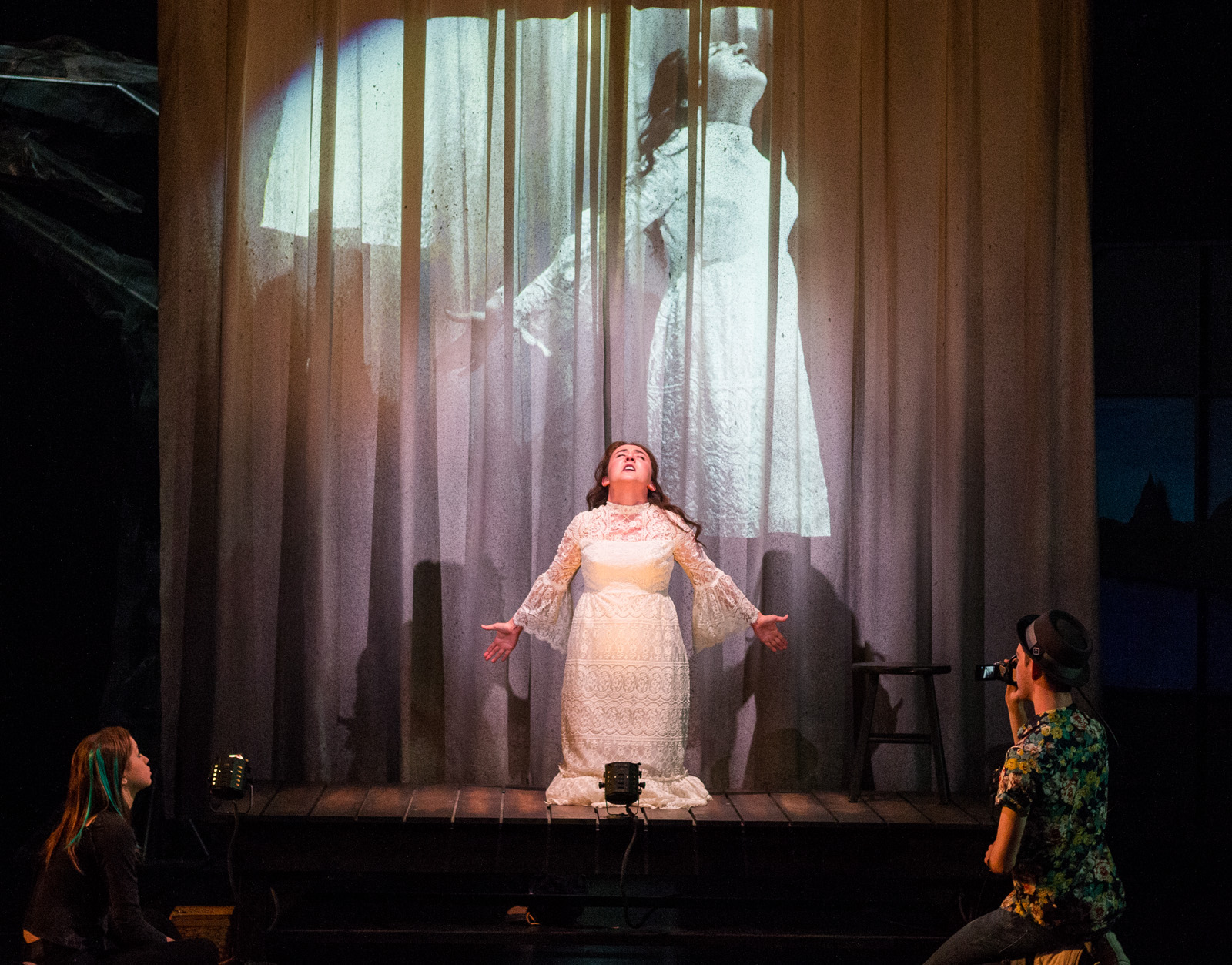 The UCLA School of Theater, Film and Television will perform Aaron Posner’s “Stupid F#@king Bird,” a play about young artists struggling against an older generation of performers on Friday.
The show will feature seven of the original play’s 14 characters. (Stella Huang/Daily Bruin)

Presented by the School of Theater, Film and Television

Actress Jamie Hughes called upon a recent clash with her mother to inform her latest stage role. The altercation laid the foundation for her character’s tense relationship with her son.

On Friday, she and a group of students from UCLA’s School of Theater, Film and Television will open the play “Stupid F#@king Bird,” an adaptation of the classic Russian play “The Seagull” by Anton Chekhov. The two-hour show highlights the artistic differences between an older, more conservative generation and a younger, more open-minded one.

“It’s very funny and real and (has) a lot of layers commenting on the contemporary view about theater, about relationships, about love,” said Michelle Yujiao Gong, the director of the show.

The show features an ensemble of seven characters – cut down from Chekhov’s original 14 – and follows the ensuing conflict between young playwright Con, played by first-year theater student Cooper Reynolds, and his mother Emma, played by Hughes. Emma is an esteemed yet worn-out actress and expresses her disdain for Con’s work.

Gong, a graduate student in directing, said she first read the play in a playwriting class. As a fan of Chekhov’s original work, she was surprised how accurately Aaron Posner, the playwright of “Stupid F#@king Bird,” converted the story of “The Seagull” to a more modern setting.

“Chekhov is subtle; everything is slow and you feel a little bit sleepy,” she said. “But this one is quick.”

Gong said the young characters in the play struggle with the older generation’s strict idea of what art is. The four younger characters are experimental and want to challenge traditional artistic notions by venturing away from concepts like well-defined plotlines and climaxes. They find that the older generation’s ideals, rooted in a tradition of old-fashioned Hollywood movies, restrict them.

As young artists, many of the students involved with the production of the show said they felt a similar frustration to Con and the rest of the younger characters in feeling rejected by an older generation of artists.

Reynolds related to Con’s frustrations with occasionally feeling inadequate about his work. Because of the strong similarities between his and Con’s impulsive and passionate personalities, he said it was difficult to draw boundaries between himself and his character, occasionally slipping out of character at times when he was feeling tired or lazy.

However, Chanèle Casaubon, a graduate student in theater design and the show’s costume designer, related in some ways to both the bright-eyed younger characters in the show and the more grounded older characters.

“I’m in this weird limbo where I’m still a student, but I’m also 27 years old and doing my master’s,” Casaubon said. “So I feel sometimes entitled … to tell people who are first-year undergrads, ‘Let me explain to you why what you’re choosing right now is not the right choice,’ but at the same time, I have so much to learn in my career.”

Casaubon could especially relate to the hopeful young actress character, Nina. When she first visited UCLA after getting accepted into the graduate program three years ago, she said she was – and still is – excited for her career and to start working with big industry names.

As she has progressed in her master’s program, she has, like the older Emma, occasionally felt worn down by some of the more menial tasks of her job, such as cleaning up dirty costumes.

However, Casaubon tries to keep Nina’s eager attitude because she said it is necessary to thrive in the entertainment industry.

Gong hopes the audience of “Stupid F#@king Bird” can learn to look at theater and the arts in a new, more thought-provoking way.

“I hope they can understand theater is not an entertainment place, or not only a place that you feel comfortable to rest,” Gong said. “It’s actually a place for you to think, for you to talk, for you to communicate.”