HOOLIGAN production ‘Footloose’ kicks off with a medley of dance styles 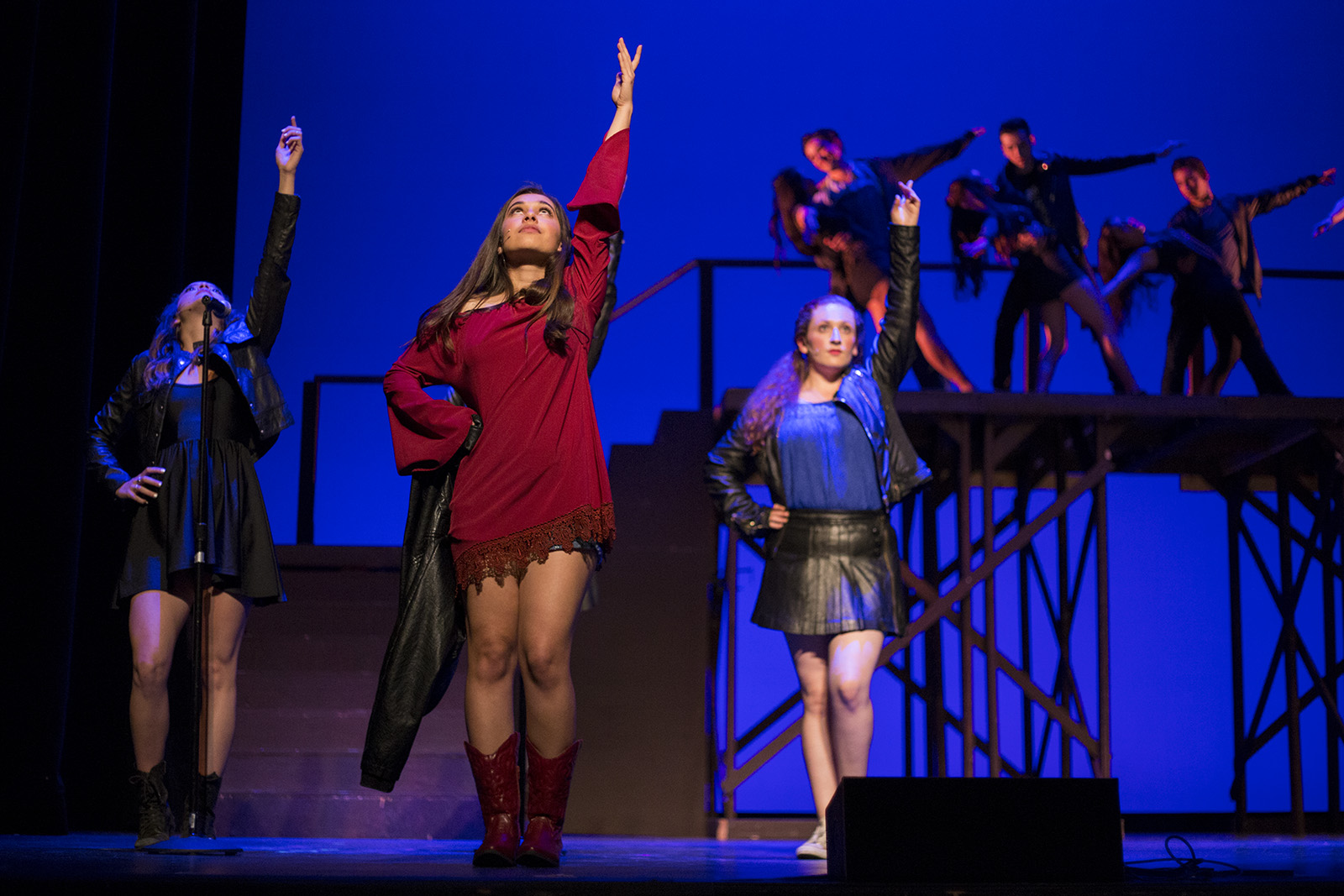 Sam Brogadir took the stage as Ren McCormack in the hip-hop styled opening number of “Footloose.” He switched to smooth and groovy jazz in “I Can’t Stand Still,” line dancing in “Still Rockin’,” and a medley of each dance form in the finale.

HOOLIGAN Theatre Company’s production of “Footloose” will open Friday at 8 p.m. at the Freud Playhouse. The company’s no-cut audition policy allowed dancers of all skill levels to participate, challenging choreographer Ellen Durnal to work with the cast members of varying dancing abilities.

The third-year theater student used detailed choreography and a slow-paced teaching style with less experienced cast members to bring the dance-centered story to the stage, she said.

The plot of the 1984 film follows the character Ren McCormack, who moves to a small Midwestern town where dancing is outlawed. McCormack, along with the local reverend’s daughter Ariel and their friends Rusty and Willard, protest the law by experimenting with all forms of movement, ranging from line dancing to hip-hop.

Durnal held a dance audition at the beginning of winter quarter to aid her in deciding which cast members would be placed in each song. To determine where an actor was placed on stage and the difficulty of their dance moves, Durnal said she looked at their energy level while dancing.

An enthusiastic dancer was more likely to be placed toward the front of the ensemble or given tricky movements such as partnering.

“If one number has sort of a more bouncy-excited style, I’ll put the dancers who naturally dance like that in that specific number,” Durnal said.

When Durnal asked dancers to straighten their arms perpendicular to their body, energetic, experienced dancers responded by performing the task from their shoulders all the way to their fingertips with a broad smile, while those with less dance experience responded with loose fingers.

She had actors kick their legs up, and experienced dancers kicked behind their ear as far as they could. Someone who loves to dance will always choose the harder version of the movement because they want to expel that energy, she said.

The complexity of some of the dance numbers such as “Let’s Hear It for the Boy”or “Holding Out for a Hero,” which include high kicks, leaps and partnering, require the more energetic dancers who enjoy being twirled and dipped, she said.

“It’s just depending on the sort of style that they have or the way that they enjoy dancing,” Durnal said.

The dynamic dance moves featured in the performance, ranging from line dancing to square dancing, proved to be a challenge for even the most skilled cast members.

Fourth-year gender studies student Tala Moussouras is participating in a HOOLIGAN musical for the seventh time. She started in ballet when she was two years old and later went on to add Irish dancing to her repertoire.

But the choreography for “Still Rockin’” was particularly difficult for Moussouras because of the fast-paced line dancing sequences. The repetitive stomp-toe-heel movements were a style of dance unlike the continuous, graceful positions performed in ballet, she said.

The cast rehearsed the sequences five seconds at a time to memorize the order of the movements, Moussouras said.

“Since these shows are no cut, anyone and everyone can be in them so there’s a lot of variety in how well we learn and what we actually know,” Moussouras said.

Even an experienced dancer can have difficulty remembering a sequence of varying actions, Durnal said. As part of the choreography process, Durnal created a detailed chart for the cast. The two columns – one for the lyrics and one for the corresponding movement – mapped out the location of each dancer as well as their respective dance moves in a short paragraph, she said.

Durnal later explained the choreography in rehearsal, detailing each step for newer dancers. Instead of instructing the cast to grapevine across the stage, she defined the terminology involved – step with your right foot, step behind, step and then touch. The process slowed down the choreography to allow performers stronger in acting or singing to learn the steps, she said.

Jayne Skinner feels more confident in the area of singing. The fourth-year psychobiology student has been singing since the fifth grade, but “Footloose” forced her to attempt more intricate dance moves, such as partner line dancing, she said.

Skinner, who plays Rusty, will show off her vocals in her solo number “Let’s Hear It for the Boy.” While the majority of her movements in the song are simple, such as walking across the stage, Skinner wanted to add a more complicated move during the dance break – a cartwheel into the splits.

Skinner already knew how to do the splits and a cartwheel, but combining the two movements into one fluid motion was difficult because of foot placement and balance.

After watching videos of drag queens cartwheeling into the splits, Skinner ran across the floor at John Wooden Center during rehearsal and leapt into the dance move.

“The challenges are what make it fun,” Moussouras said. “If it was super simple and she was just trying to give us something easy so we could all do it, then it wouldn’t look as cool, and then we wouldn’t learn anything.”