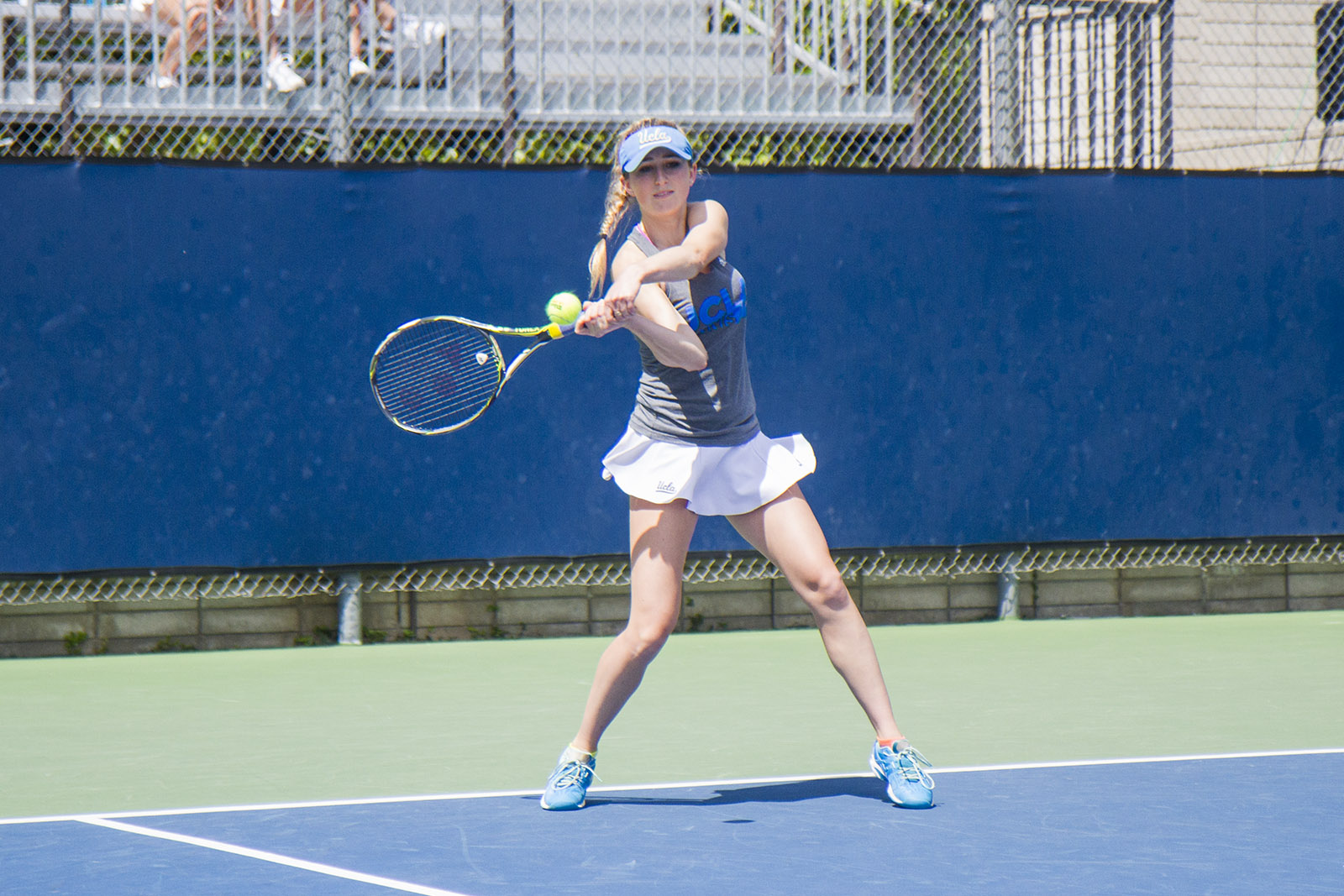 Sophomore Alaina Miller won both of her matches this weekend in straight sets, losing only seven combined games as No. 20 UCLA women’s tennis ran its winning streak to six matches. (Erin Rice/Daily Bruin)

“Especially at home, we want to set the tone early on,” said coach Stella Sampras Webster. “I think the girls have been doing a good job of coming out strong. Our players were really prepared to play and they took care of business. It’s good to see them play like that and not let their games come down to maybe their opponents’ level.”

The 23rd-ranked team of junior Terri Fleming and redshirt freshman Jada Hart clinched both points this weekend by winning its sets 6-3, improving its record to 7-0 in dual match play. Sophomores Gabby Andrews and Alaina Miller won 6-2 versus Colorado on court two, while junior Kristin Wiley and freshman Ena Shibahara added a 6-1 victory against Utah. The three teams have a combined record of 16-0, while all other pairings this season collectively have gone 14-7.

“The lineup has really helped – in doubles, I think we finally got it figured out and we all know our job,” Miller said. “I think that’s been the biggest key for us to having the success we’ve had. We all are very comfortable with each other.”

Neither the Buffaloes nor the Utes entered with a ranked singles player – Shibahara and Hart are second and 114th, respectively. Shibahara dropped only six games in her two straight-set victories, and Hart clinched UCLA’s fourth point Friday with a 6-2, 6-1 win at court three against Colorado’s Annabelle Andrinopoulos.

Miller was the only other Bruin, along with Shibahara, to win both her singles matches this weekend. She beat Colorado’s Kyra Wojcik 6-1, 6-2 and Utah’s Jena Cheng 6-2, 6-2. Fleming almost accomplished the same feat, but she was one game away from a straight-sets victory against Colorado’s Louise Ronaldson before sweeping Utah’s Brianna Turley 6-1, 6-2.

Hart and Miller’s play continues a trend this season for the Bruins, who are only 7-6 at court two and 5-9 at court three compared to 12-4 at court four in singles. Before this weekend, Hart was 1-3 in her past four matches at No. 3 singles, although she faced ranked opponents – two of whom were ranked in the top 20 – in all four.

UCLA is currently tied for second in the Pac-12, trailing only Stanford, which defeated the Bruins 4-3 in both teams’ conference opener. The Bruins will go on the road to take on the Arizona schools over the weekend.

“Matches like (this weekend’s) lets us work on the stuff that we’ve been working on in practice,” Shibahara said. “We are able to have more match experience and I think our matches against Arizona and Arizona State will be some good challenges for us.”