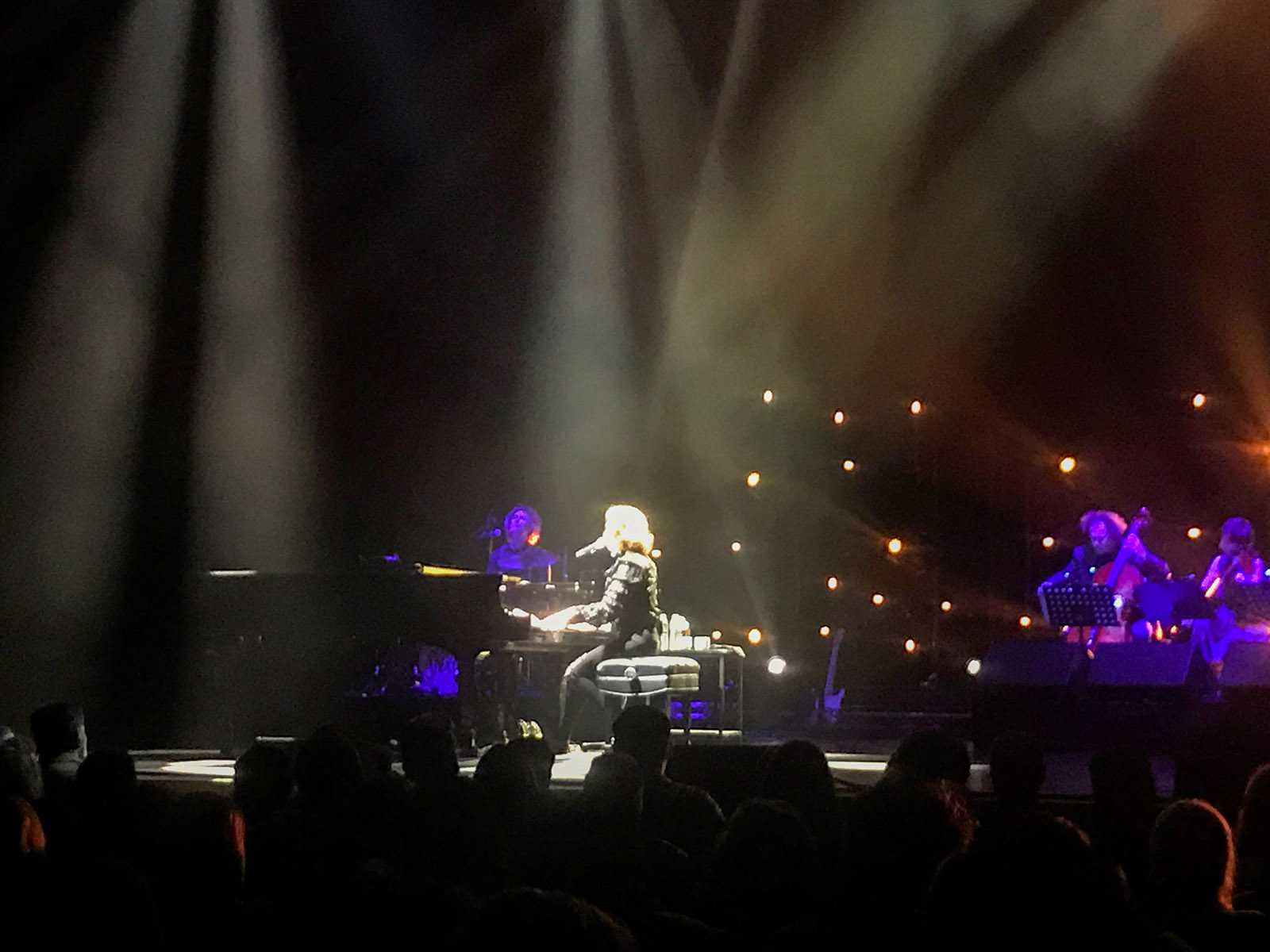 Singer Regina Spektor revamped old songs while performing at the Dolby Theatre on Saturday. She sang both old and new songs, including “Fidelity” from “Begin to Hope” and “Silly Eye-Color Generalizations” from “Live in London.” (Andrew Warner/Daily Bruin contributor)

Regina Spektor brought all her wonderful eccentricities and musical mastery to the Dolby Theatre stage Saturday, dazzling hundreds of her own spectators.

Saturday night’s show marked the final performance of Spektor’s spring 2017 tour, which she began March 5. Spektor and her band performed well-known songs like “Fidelity” from 2006’s “Begin to Hope,” along with lesser-known gems including “Silly Eye-Color Generalizations” from the album “Live in London.”

Spektor, clad in all-black clothing, came onstage and kicked the night off with an old fan favorite – “On the Radio.” The theater immediately burst into uproarious cheers as she banged out the first few notes of the song on her piano. And rightfully so, as Spektor seemed on her game Saturday night – she and her band melded together to create whimsical and exciting tunes.

But Spektor was quick to deviate from her standard repertoire.

Spektor and her band revamped many of her older songs to make them more stylistically similar to songs on her most recent and musically more full-bodied album, 2016’s “Remember Us to Life.”

While her older songs often showcase more raw emotional depth, newer ones, with their more orthodox production, capture the same emotions in a more compact fashion.

While adding to some of the songs could have been perceived as jarring to some, it ultimately enhanced the concert-going experience. The updates allowed older and more knowledgable fans to listen to some of their favorite songs, while also exposing newer fans to her lesser known work.

The latter is particularly important as much of Spektor’s earlier music can be a bit of an acquired taste due to the less fleshed-out production of songs like “Us” and bizarre lyrical content on “Hotel Song.”

On the original recording of “Sailor Song,” Spektor primarily used piano and percussion instruments to accompany her cheery vocals. But at the concert, Spektor and her band added in strings to lend a fuller and more sophisticated quality to the song.

Spektor’s quirky stage presence matched her eccentric persona. She spent most of the time sitting at the piano, even noting that she preferred to hide behind it. Her few moments away from the piano mostly consisted of awkward – albeit charming – dancing in which she toyed around with the microphone cord and swayed around with fluid motions, waltzing back and forth across the right half of the stage.

Despite the lack of variation in staging, the songstress was by no means boring. In fact, Spektor has a mesmerizing and seemingly effortless way of controlling the stage even with limited mobility. Her piano-playing fingers were entrancing and her voice was booming – Spektor’s musical prowess was more than enough for her to take command.

She pounded masterfully on the keys of the piano and her smooth voice thundered throughout the entire theater, particularly on “The Trapper and the Furrier” and “Après Moi,” both of which require emotional depth because of their darker subject matter.

Highlights of the night included when Spektor brought out her husband, Jack Dishel, to play guitar with her on “You’ve Got Time,” and when Spektor performed “Obsolete” off her latest album.

“You’ve Got Time,” was, without a doubt, the most energetic song of the night thanks to the vigorous strumming of the guitar and insurgent lyrics. Dishel’s guitar accompaniment was appreciated for its added variety to other songs’ orchestral feel.

While “Obsolete” has a slower pace, it was Spektor’s strongest vocal performance of the night. She quickly and smoothly transitioned from her breathier, almost mousey, upper register to her rich and robust lower register.

Spektor’s live vocals were just as crisp and clear as on her albums. Higher notes were noticeably breathier and quieter in person, but they still felt effortless. On songs like “The Trapper and the Furrier,” Spektor’s lower notes had a rich and dark depth to them that resonated throughout the theater like a thick layer of fog – cold and dense, yet refreshing.

When Spektor left the stage after singing the final song of her encore – “Samson,” another old favorite – the house felt electrified. While “Samson” is not the most vocally impressive song in Spektor’s catalog, it was a memorable end with its bittersweet lyrics about a lost lover.

Spektor’s more mature musical style was a magnificent fit for the luxurious and elegant Dolby Theatre. While her musical style has, without a doubt, changed over the years, Spektor’s ability to entertain an audience remains stellar.