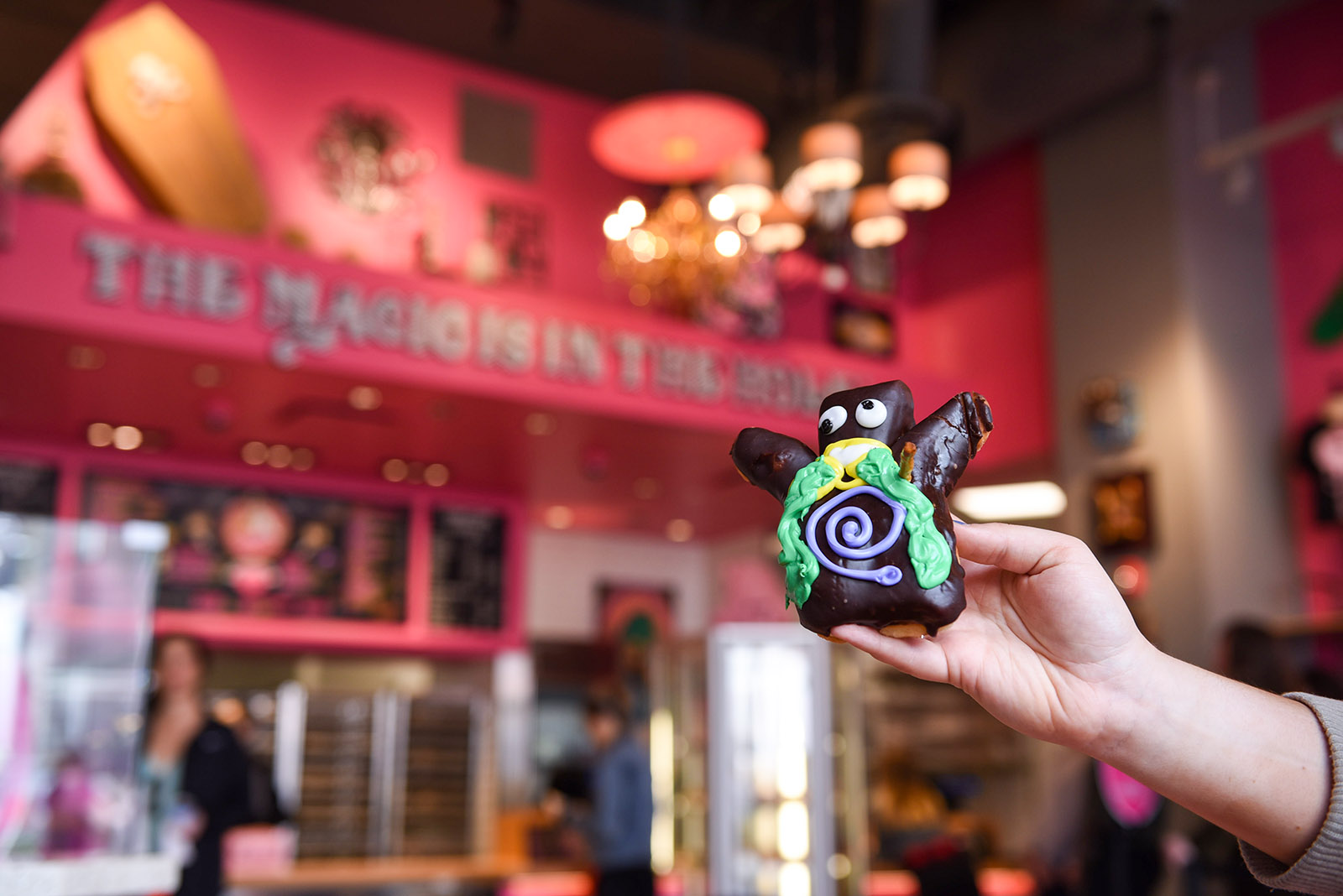 “Good things come in pink boxes” in Portland maybe, but not in Hollywood.

The slogan belongs to Voodoo Doughnut, which opened its fifth location at Universal CityWalk on March 9. The doughnut shop previously sold doughnuts at three restaurants in Oregon and one in Colorado.

The pink shop established itself as a doughnut superpower in the weird city of Portland, offering up cakey doughnuts with crazy toppings, such as cereal and bacon. Though the Universal Studios location mimics the pink and spooky decor of the original Voodoo Doughnut, the desserts themselves were not as fresh as Portland’s versions.

California’s Voodoo Doughnut is a knock-off of the true experience, so go because the treats are photogenic, not because they’re tasty.

Voodoo Doughnut’s pink walls blend in well on the CityWalk among neighboring storefronts with a light-up Cinnabon, giant King Kong and large flip-flop sign. Hollywood’s flamboyance rivals that of Portland.

Pink and green chandeliers hang inside the shop, which is bigger than the downtown Portland location. Blue, pink, orange and yellow tiles line the floor, while an adjacent wall displayed paraphernalia – shirts, hats and thermoses – because after all, customers should really only go for its reputation and not its culinary excellence.

It smelled of sugar and chemicals, likely from recently completed construction.

The whimsical interior overpowers the space, which has far too little seating. The shop could also benefit from additional outdoor seating beyond its two small cafe tables.

Voodoo Doughnut’s menu looked similar to Portland’s: it still has the Captain my Captain doughnut with Cap’n Crunch cereal, the Dirt doughnut with Oreos crumbled on top and its famous Bacon Maple bar doughnut – breakfast in doughnut form.

However, the menu was sterile, calling the Oreo and peanut butter confection the ODB instead of its full name: Old Dirty Bastard.

The cream-filled delight was the most delicious of the three tried. The dough was soft, the cream was moist and the maple was sweet. Yet the frosting came hard and it cracked firmly when the doughnut was cut in half, opposed to oozing like fresh frosting should.

The other two doughnuts – the Dirt doughnut and Voodoo Doll doughnut – paled in comparison to the fresher versions served up at the doughnut shop in Oregon.

Crunchy Oreos, sweet vanilla and chewy dough normally combines in the Dirt doughnut, the chain’s most indulgent favorite. But in Hollywood the $2.50 doughnut was stale. Its cakey dough was more reminiscent of dry bread.

Similarly, the Voodoo Doll doughnut is cute for a photo op in its pink box, but the chocolate-glazed, puppet-shaped doughnut’s appeal stops there.

Its hardened frosting cracked due to age, and its jelly filling tasted artificial. But the chocolate and raspberry flavors are age-old counterparts that combined well in one tangy bite.

Based on the three picturesque yet bland fried desserts, the pink doughnut shop feels commercialized.