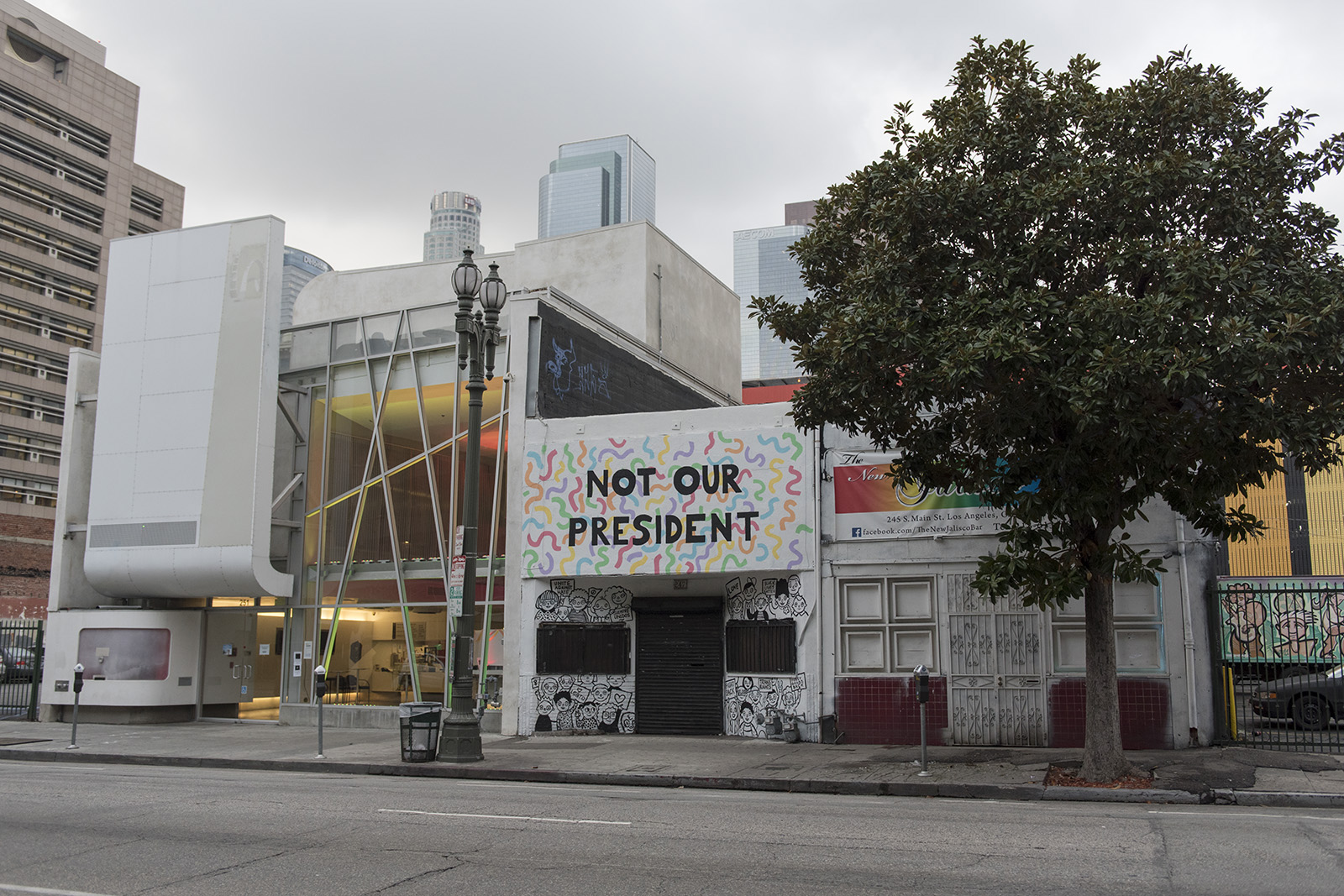 The “Not Our President” mural is painted on the front entrance of The Smell, a music venue in downtown Los Angeles. Owner Jim Smith commissioned artist Sean Solomon to create the design, which Solomon completed in November. (Miriam Bribiesca/Photo editor)

Political street art has become an outlet for advocacy among Los Angeles artists after the presidential election.

Although street art with politically charged messages is often less visible in relatively affluent Westwood, many of East and South Los Angeles’ ethnic communities use public art to spread their messages.

That has been a core aspect of the work that Paul Von Blum, a communication studies and African American studies lecturer, has focused on since 1968, when he began teaching about activist art at the University of California, Berkeley.

The senior lecturer at UCLA said LA artists use street art to convey messages of ethnic struggles, political tensions and racial inequity since the city is so diverse.

“People of color and minorities are generally very responsive to the messages political murals have because they reflect the concerns of their communities,” Von Blum said.

The city is full of artwork by Latino and African-American muralists who have made their marks across Los Angeles. Street art based off the current political climate has gradually made an appearance too.

Murals can be powerful statements, publicly catching the attention of anybody nearby, in comparison to institutionalized pieces that are limited to the museum-going population.

The underserved artists and audiences of political murals are the reason why LA mostly has pieces representing left-leaning political ideologies, Von Blum said.

“Because street art is a form of art as resistance, more privileged and affluent conservatives do not need to express their opinions through public street art,” Von Blum said.

Looking at street art from a historical perspective, sometimes murals with liberal messages have been covered up, said Teofilo Ruiz, a UCLA history professor and instructor of a fiat lux course that explores the streets of Los Angeles.

For example, the 1932 “América Tropical” mural on Olvera Street, which confronts the negative impacts of American imperialism, was covered up by conservative individuals who did business on the street.

The mural featured a Chicano crucified on a cross with an eagle representing America perched on top. The piece was recently restored to spread the intended political messages against imperialism and to bring awareness of historical wrongs against minorities, Ruiz said.

Many leftist murals that were covered up in the 20th century are being restored. Ruiz said several of these paintings were created by Latino artists who wanted to spread their messages against the injustices they believed were committed against them.

“Murals function to raise questions and spread awareness of issues that are close to the artists’ hearts,” Ruiz said.

In November, Sean Solomon stood on a ladder and drew rainbow colored squiggles above the entrance of The Smell, a concert venue in downtown Los Angeles.

Months before the 2016 presidential election, The Smell’s owner Jim Smith commissioned Solomon, a Los Angeles-based musician and artist, to paint a mural for the entrance of the venue. He completed an image of caricatures holding protest signs topped with a banner that has “Not My President” painted in a bold font.

“With (President Donald) Trump winning the election it really reflects how misguided some people in the country are to believe his views,” Solomon said. “The Smell is our community art space and I was happy to draw something that represented what we stand for.”

Solomon, who plays in a band that performs regularly at The Smell, talked to Smith before designing the mural to make sure he was aware of the mural’s political messages.

“Smith is kind of like the LA punk dad, and it was brave of him to allow us to paint something political on his wall,” Solomon said.

The finished mural’s design consists of a distinctive top and bottom half. The top section has “Not Our President” written in black block letters in the style of Keith Haring, a liberal activist artist of the 1990s. The text emulates the font used in Haring’s “Crack is Wack” and “Safe Sex” pieces, which were made in response to New York’s cocaine and AIDS epidemics, respectively, Solomon said. The backdrop is made up of colorful wavy lines to represent the rainbow colors of the LGBTQ flag.

The bottom section consists of a collection of different black and white caricatures holding protest signs like “Black Lives Matter” and “Unite Against Hate.”

Solomon created the design of the piece but reached out through social media to members of The Smell community and his band members to help him paint the mural.

Involving others with the piece made the message more meaningful, Solomon said.

“I do not take ownership of the artwork because I wanted to do something that could involve everybody at The Smell,” Solomon said. “Community spaces right now are important because sometimes alt-right people target these venues, but we have strength in numbers.”

Venue regulars have reacted positively to the statement made through the wall art, said Noelani del Rosario-Sabet, a first-year pre-international development studies student and member of the Art as Activism club.

After she watched a concert at the venue in November, del Rosario-Sabet posted a picture in front of the mural to show her support for the message of resistance the piece conveys.

“I am so glad people are showing their discontent in the state of the nation through art,” she said.

Solomon hopes the design of the mural and the community supporting it will inspire onlookers to reflect on and celebrate the differences among Angelenos.

“The Smell is a community art space and the mural is meant to capture the overwhelming diversity we see in Los Angeles and the people who come to The Smell,” he said.

In 1992, a community hall filled with local Los Angeles schoolteachers, parents and general citizens raised their hands to vote for an environmental mural on a brick wall on Pico Boulevard.

The late artist Eva Cockroft’s mural “Chain Undone” was commissioned by the nonprofit public arts foundation Social and Public Art Resource Center for a Neighborhood Pride initiative. The project allowed LA community members to select murals for each of their respective 15 council districts.

Rancho Park community members selected “Chain Undone” as their district’s piece and the mural was opened to the public in December 1992. The mural stands today as a painting advocating for environmental advocacy, said Carlos Rogel, a project manager at SPARC.

The mural has three sections – a colorful painting of marshlands between two black and white paintings depicting industrialized factories. The juxtaposition of the barren factories with the colorful wetlands serves to highlight the effects of not prioritizing environmental regulation laws, Rogel said.

“The contrast is meant to be a visual metaphor of the effect of industrialization and how it literally desaturates our natural environment,” he said.

Cockroft, originally a muralist in New Jersey and New York, focused her career on labor and environmental advocacy artwork. When she was living in New Jersey, she was exposed to the impact of environmental racism, where negative environmental health effects impact low-income minority populations on the East Coast, Rogel said.

When she moved to Los Angeles in 1989, Cockroft continued to paint ecological advocacy pieces and became involved with SPARC’s projects.

Although the mural is more than two decades old, the issue of industrialization is still one that plagues our society today, said Noah Garrison, the environmental science practicum director at UCLA. He said it is important to be environmentally conscious, especially with environmental deregulation from President Trump’s administration, such as the overturning of clean water acts.

Murals like “Chain Undone” serve as reminders for the public to continue taking part in critical discussions regarding ecological advocacy and can be powerful reminders of the effect of deregulation, Rogel said.

“Murals can serve as a visual metaphor for critical issues in the world,” he said. “It is important for citizens to pay attention to these metaphors and have discussions about the subjects pictured in murals.”

A Hollywood coffeehouse got a graffiti makeover in May, when it was converted into a campaign headquarters for Democratic presidential candidate Bernie Sanders.

Johnie’s Coffee Shop is an example of the 1950s futuristic Googie architecture and has been featured in films such as “Miracle Mile” and “Reservoir Dogs,” but it closed for business in 2000. The diner remains a pop culture icon in Los Angeles.

But Johnie’s Coffee Shop Restaurant took on new life during the 2016 primary elections, reimagined as a phone banking center for the Vermont senator.

When the center opened in May, a colorful portrait of Sanders was painted on the side window of the restaurant, along with the word “Bernie” in red, white and blue on the roof of the shop.

The lettering piece on the top of the roof was commissioned by the public arts production company In Creative Unity and created by graffiti artist Cr8. The painting was arranged by Cr8 and Jeanna Penn, an employee of ICU, because of their shared support of Sanders.

The lettering, stylized like street graffiti, was completed in a day – just in time for the opening of the phone bank center.

“I found contacts through informal means and friends of friends, but we shared support for Sanders and that helped rally the interest even in a time crunch,” Penn said.

Penn wasn’t involved in the creation of the “Bernie” portrait; it appeared after ICU’s lettering was finished.

ICU previously commissioned artists to paint political artwork, such as Barack Obama murals, in 2008 at locations such as Venice boardwalk, Melrose Avenue and Figueroa Street.

The artworks encourage voters to rally together in support of their chosen politicians, which is why ICU wants to be involved in political pieces, Penn said.

“By the time we put up our (graffiti lettering), many voters had made up their mind on who they would vote for during the election,” she said. “But the work still brings people together and excites the crowd and Bernie supporters.”

The graffiti lettering and colorful Bernie painting on the window are examples of street art that resonate with liberal voters who pass by the coffee shop, said Martha Valencia, a first-year biology student.

An avid Sanders enthusiast, Valencia was enthusiastic to see people in the city embracing the same political ideals as her through artwork.

“Los Angeles tries to be progressive and make bold statements through art,” she said. “It excites me that we have artwork that represents many of our values.”

Because Sanders gained a large following of younger millennials during the primary season – despite his loss in the California election – he has become a symbol for leftist protest movements, which are now being called The Resistance by many liberals.

After Trump’s inauguration, the mural and graffiti art have become symbols of the opposition to the current administration, Penn said.

“This artwork still serves as a rallying cry and motivator for people to not be complacent to what is going on in our current political sphere and keep working to have their voices heard,” she said.