UCLA TFT showcases strength of women in production of ‘Helen’ 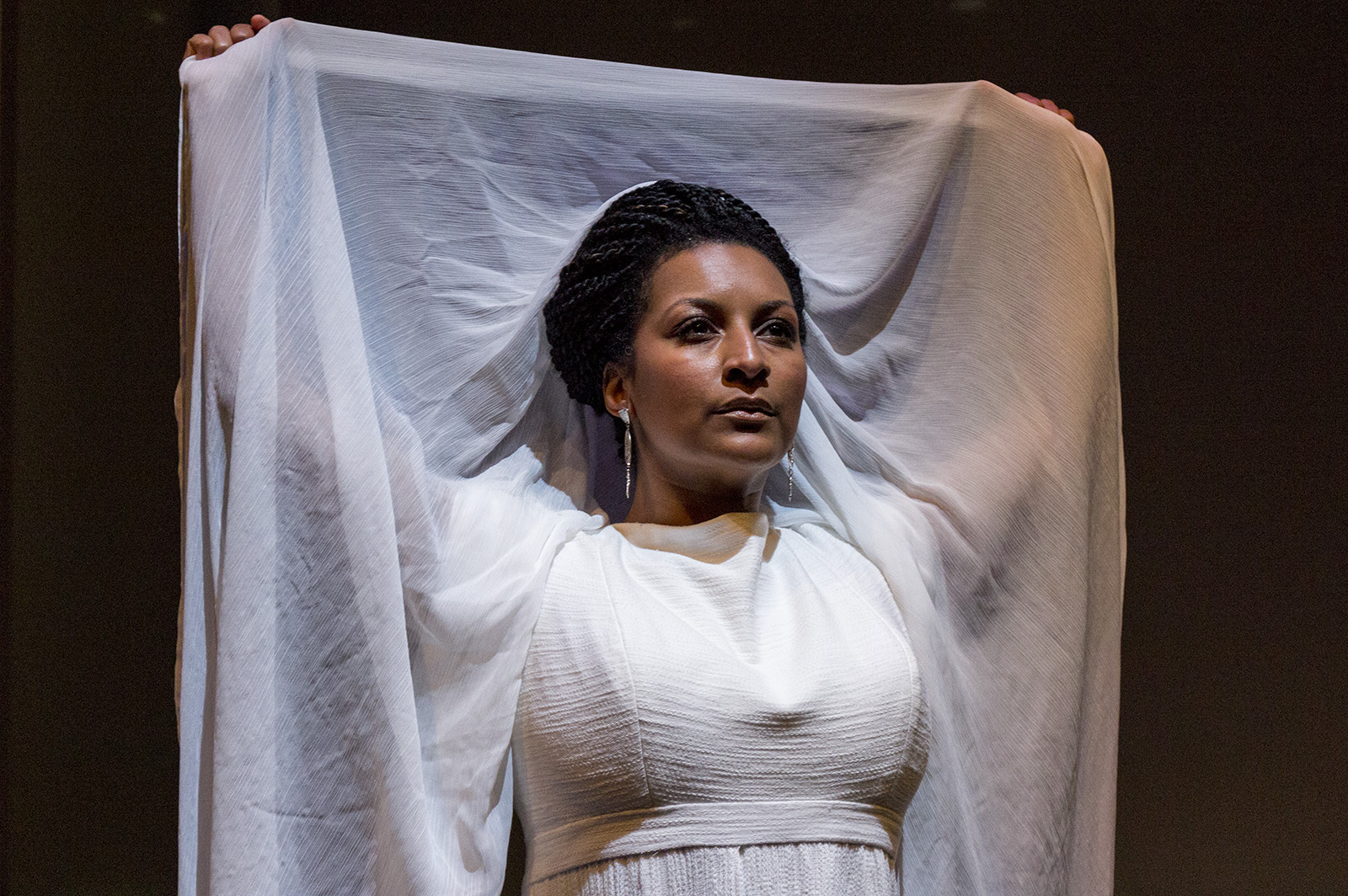 Theater graduate student Ashley Cleveland is double casted to play Helen of Troy in UCLA’s School of Theater, Film and Television’s production of “Helen,” along with graduate student Beth Lane. They were inspired by the strong and confident female character. (Chengcheng Zhang/Daily Bruin)

Ashley Cleveland stepped slowly onto a dark stage. Her veil swirled around her as she walked, and a recording of Richard Burton saying, “Was this the face that launched a thousand ships?” played in the background.

Finally she paused and removed her veil, allowing the audience to see her face for the first time.

Cleveland, a theater graduate student, will play the title character in the UCLA School of Theater, Film and Television’s production of “Helen,” which opens Thursday at Macgowan Hall’s Little Theater.

The show is double casted: There are performances in which Cleveland plays Helen and theater graduate student Beth Lane is in the chorus, and vice versa. The two students have focused on developing physical aspects of the performance, like their onstage movements when walking and dancing to convey the strength of Helen’s character.

“Helen” tells a different version of the myth of Helen of Troy. In the production, a vision of Helen created out of clouds is delivered to Troy, said Michael Hackett, professor of directing and theater history. The play focuses on the mythological figure of Helen, who is exiled to Egypt and must figure out how to return to her family.

Much of the world hates Helen because they believe she left her husband for another man and consequently caused the Trojan War, Hackett said.

Helen is a fierce, determined and strong survivor who fights to clear her name and reunite with her family, Lane said.

Lane initially related to Helen because they both have children and have both been married for over 15 years. After rehearsing for nine weeks, she understands the role in the context of the current political climate and sees Helen as a symbol to remind women to have strength in the face of adversity, Lane said.

Helen encourages women to be the agents of their own change and to rise to challenges, Cleveland said. In one scene, Cleveland portrays Helen standing up to the Pharaoh by devising a plan to escape Egypt.

Cleveland tries to display Helen’s confidence through subtle movements like a simple hand gesture or tilt of the head. She learned that less is more when it comes to portraying Helen’s intricate inner dialogue, she said.

“The overall message is to look at this extraordinary woman and how she’s dealing with the many men around her,” Miller said.

Both actresses play engaging roles, emphasizing different aspects of the same character, Miller said. Lane approaches the role with quiet maturity and especially developed scenes in the play that are based on tragic emotions. Cleveland plays the role with vivacity and vitality, he said.

Lane uses milder movements to develop Helen as a character in the opening scenes, while Cleveland plays a conniving and undaunted Helen in the second half of the play when the character is escaping Egypt, Miller said.

[Related: TFT professor to star in revival of play ‘Awake and Sing!’]

Playing Helen helped Cleveland develop her true voice and progress as an artist, she said, and Helen’s bravery and fearlessness have inspired her to be courageous. She was nervous about singing in front of the audience for a scene with a love song between Helen and her husband, but thinking about Helen’s bravery as a character and hearing Hackett’s words of encouragement as a director helped her.

While the play occurs in fantastical circumstances, Helen’s strength and perseverance is an example to women today, Cleveland and Lane said.

“This show has come at a time for women to be reminded of the power that we have,” Cleveland said. “We should not think that men can dictate to us what is and what is to be: We are the agents of our own change.”